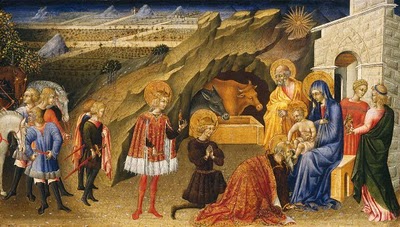 Today is the Feast of Epiphany, the celebration that marks the Three Kings traveling to Bethlehem to visit the Baby Jesus, bringing with them gifts of gold, frankincense and myrrh.

Adoration of the Kings (or Magi) scenes are popular in art. A patron could use this subject, with its well-dressed kings, entourages of exotic attendants and packs of interesting animals, to reflect his own wealth and status. The Medici family, rulers of Florence in the 15th and 16th centuries, were known to commission many Magi paintings, often casting themselves as the kings. Similarly for an artist, this story afforded an opportunity to display skills because the hordes of people, fanciful clothes and bizarre animals required by the story all called for serious painterly ability.

For these reasons, Magi scenes tend to look busy and ornate, embellished with lots of gold leaf. The NGA has a number of this sort of picture, such as a circular version by Fra Angelico and Fra Filippo Lippi (c.1440-60) and another by Botticelli (1478-82). Alluring as these paintings are, with all their glittering regalia, it was a very different kind of work that caught my eye today.

Giovanni di Paolo’s Adoration of the Magi (c.1450) struck me not for its size or obvious goldenness, but rather for its small scale (27 x 46 cm), simple frame and pared-down presentation. It didn’t jump out at me and I had to get in close make out the details. And what details! This man must have had the tiniest brush in the world to paint so fine: the kings’ garments, landscape and facial features are all minute. This, coupled with the subtle shading and spatial recessions leave no doubt that this artist was skilled. What’s interesting then is that he’s forgone the temptation to pump the picture full of the usual crowds and critters. Instead he’s limited the clutter and used a simple horizontal arrangement, spacing the characters sparingly. What’s wonderful is that, by stripping away the traditional paraphernalia, Giovanni di Paolo has given himself the chance to focus on the psychology of the story.

From the attendants on the left, fidgety and distracted by the horses, the eye travels (via two of the kings) to the intense encounter taking place on the right. The old king has taken off his crown and is kissing Jesus’s feet, not daring to look up while the baby touches his head with bungling enthusiasm. It’s this oddly moving encounter between a very young and a very old person and the miraculous meaning behind the moment that the artist foregrounds. The two handmaidens behind the Virgin act as an antidote to all this seriousness: they’re already clasping the old king’s gift and it looks like they’re having a good old gossip about it (where d’you think he got this? what’s it worth do you reckon?) Good to see that the artist retained an eye for natural detail, and that women have hardly changed through hundreds of years.

Wondrous as it was, the Kings’ visit to the Christ child was responsible for setting in motion a chain of events that would lead to the massacre of the innocents. Perhaps there’s a sense of what lies ahead shadowing Giovanni di Paolo’s painting. Even today Epiphany can be a little sober, since it marks the end of the festive period, telling us it’s the time to take down the decorations and put out the tree. So with that, let’s enjoy this moment a little longer, before we say goodbye to the sacred idyll of the holidays for another year. 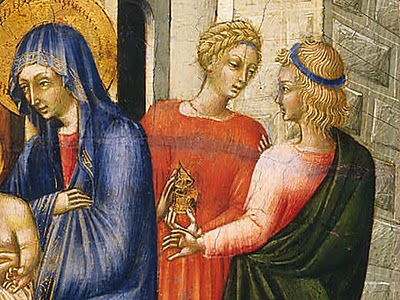 2 thoughts on “We Three Kings”