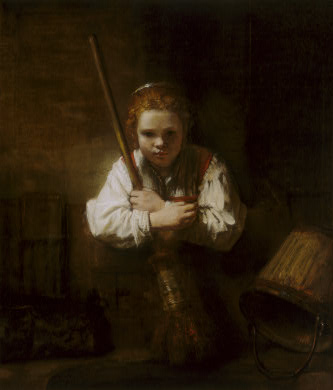 Are you superstitious? Will you worry the next time a black cat crosses your path? Do you count down the seven years after shattering a mirror? Most of us are familiar with a few old wives’ tales, but in these times of hard facts and tough technology, most of our irrational beliefs can be quashed quickly and clinically. See a black cat wandering in your neighborhood? Call someone, it might be lost. Broken a mirror? Go online and order another.

But are some of our quainter superstitions, settled into our psyches over the centuries, worth hanging onto (and, shock horror) abiding by? Take the broom: hundreds of baffling beliefs surround this simple domestic tool, particularly at this time of year. In many countries, a broom laid across your threshold on New Year’s Day is thought to keep evil spirits away. In Italy, the new broom sweeps clean: their symbol of the ‘scopa’ is a powerful and prevalent one in the early January days. It’s the Italian idea that the first weeks of the new year are the time for ‘cleaning house’, metaphorically speaking. This is the moment to ‘sweep away’ any strife that troubled the previous year and to ‘clear a path’ for good things to enter in. This simple and enduringly popular belief sees lots of shops stocking new brooms in January (big and usable as well as small and ornamental).

Today’s picture celebrates this Italian superstition. It’s called Girl with a Broom and dates from the 1640s. The picture is likely by a Dutch artist called Carel Fabritius (c. 1622 – 54) who was employed in the workshop of Rembrandt. The painting shows a young girl, leaning over a fence, holding a broom. There’s an upturned bucket to her left and she’s looking at us. So she’s paused in the midst of her chores we get this intense moment of communication.

The portrait is lit from the side: squint your eyes and it’s clear that light is beaming in from the left, creating a balanced distribution of light and dark throughout the picture. Her right arm glows white while we’re losing her left arm to shadow. Most dramatic is the tonal variety that plays on her face (tone is the effect of light and shade on color). Here Fabritius smudges the oil paint through different tones of flesh color to make the girl’s face plump and round and touchingly youthful. Looking at this closely, we see now that in fact she’s not looking at us at all: her eyes are cast ever so slightly downwards and she seems lost for a second in private musings, with any number things flitting across her small face.

When looking at this picture there’s an unresolved feeling that creeps up on you, unexpected in such a simple scene of a humble subject. The swallowing darkness, the overthrown bucket and the silence of the sitter all lend a sort of sweet eeriness. And, oddly enough, it’s the broom that she’s clinging to so tightly, with its striking diagonal and gleaming bristles, that sticks in our mind. 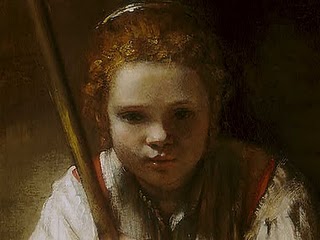 One thought on “Clean Sweep”