By now, people living in Washington, D.C. know about Skip the Bag, Save the River, a law effective from Jan 1st 2010 by which District businesses selling food or alcohol must charge customers 5 cents for each disposable paper or plastic carryout bag they use. The majority of the fees collected go to the Protection Fund for the Anacostia River, which runs from Maryland into D.C.

This initiative, pushing people to be aware of the environment and encouraging a more harmonious relationship with nature, brings to mind a period in American history between 1820 and 1860, when artists were mastering a kind of painting to reflect the intense pride Americans felt for their new land. At a time when people were exploring western territories and developing new social and political structures, the country’s visual arts established landscape painting as the most important art form for the 19th century. The first native school of American landscape painting was called the Hudson River School: it was geared solely to recording and celebrating the natural beauty that early settlers witnessed around them.

Today’s painting is taken from the Hudson River School. It’s called Autumn on the Hudson River (1860) and is by Jasper Francis Cropsey (1823 – 1900). This huge picture (200 x 320 cm framed), takes your breath away with its bright colors and dazzling sunburst. Cropsey’s love of nature is evident in the way he picks out every blade of grass and the rich canopies of leaves. In fact the leaves caused quite a stir among British viewers (Cropsey painted this landscape from memory in his London studio during a sojourn in the UK): the artist had to bring specimens of actual leaves with him to convince people that such bright foliage did exist in America.

So how does Cropsey glorify this terrain? Well for a start he’s framed the scene by placing tall trees on either side in the foreground: these act like curtains onto a stage, adding depth to the view and drawing our eye in. He’s set the horizon line to mimic where the viewer’s eye-level would be in this setting in real life: this pulls us into the picture. Cropsey also does a lovely bit of backlighting: light from the setting sun hits the horizon and makes it glow, attracting our eye and giving the other elements such as the tree trunks soft auras of light.

But in fact, the most arresting thing about this painting is the unspoiled nature of the land. The waters, trees, rocks and plants appear totally untainted by human presence or abuse. Artists of the Hudson River School explored Manifest Destiny – the belief that Americans had been chosen by God to explore and settle the continent. Tellingly, the School also insisted that any interaction between man and nature be depicted as harmonious and co-existent. Cropsey, accordingly, has included human activity in the middle-ground of his painting, but presents it as industrious and non-invasive (you need to get in close to even see it). What a beautiful template for balanced behavior between man and land this is: Cropsey’s picture proposes the environment is a place of wonder, to be respected and protected if it is to nurture and tolerate human life.

When looking for inspiration for today’s picture, I asked a guard in the NGA if he knew of any great river paintings. His face broke into the biggest smile: “Go to the American section! There are so many beautiful rivers there!” That will stay with me for a long time: if a painting of a river can light up someone’s face like that, surely it’s worth fighting for the real thing; at the very least in our own backyard? 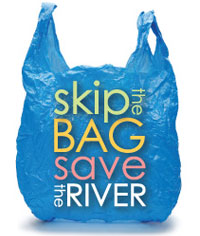