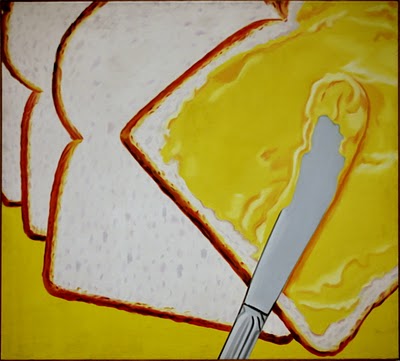 What’s your Sunday morning ritual? Are you woken early by the kids, a dog who wants to go for a walk, a husband who wants to go for a run? Are Sunday mornings about getting over the night before, or getting on top of the week ahead? Whatever fills those sacred hours at the heart of the weekend, my guess is it’s going to be things you don’t have time for in the week. And one of those things is definitely a long, lazy, leisurely brunch.

Brunch (late breakfast/ early lunch) is surely a Sunday staple for many of us. Whether you go out or stay in, invite others or do it alone, brunch is a chance to catch up, sit back and relax. Most importantly (let’s be honest here), brunch is a chance to indulge in some serious eating (it’s two meals in one, after all), so if it’s done right, it’s piles of pancakes, oodles of eggs and lashings of syrup all round.

For a meal of these proportions we need a big, brash painting, so we’ll take one White Bread by James Rosenquist, please. Rosenquist (American, born 1933) was one of the leaders of Pop Art in the 60s and 70s, a movement that challenged the distinction between “high” and “low” art by drinking in images of popular culture. Artists such as Andy Warhol, Roy Lichtenstein and David Hockney started using Hollywood movies, advertising images, packaging logos, cartoons and television as their new iconography. Pop Art became instantly successful commercially, because it was so recognizable and easy to “get”.

Having moved to New York in the 1950s, Rosenquist had his break-through when he quit his job as a sign-painter and started creating monumental works in the Pop Art vein. White Bread, from 1964, is one of his best-known works. It shows four huge slices of bread in extreme close-up, the topmost of which is being slathered with butter by a knife. This is a Pop Art painting in as much as the bread appears to be of the pre-packaged, store-bought variety, the butter might in fact be margarine (from one of those massive tubs) and the knife looks like plain ordinary stainless steel, available to all.

But Rosenquist is interesting in that he’s part Pop Art, part traditional, serious artist. Notice how he avoids including any obvious brand names or logos here (no Warhol-style “Campbell’s” or “Coca-Cola” for him). Also, he seems to be making a point about painterly technique, about laying color on a canvas and its visual results. You see, Pop Art had adopted new techniques like screen-printing, which created easy-to-replicate and market ‘products’ rather than unique works of art. However here Rosenquist has created a one-off oil on canvas, non-repeatable, and therefore a true work of art. It’s entirely possible to envelope yourself in White Bread as a painterly work. The smooth paint, slicked across the canvas, melds with the spread being depicted. The elegant overlapping of the slices turns into an abstract pattern. The yolky yellow in front and back flattens the whole into a series of shapes.

This work is a visual treat to be gulped down whole. It’s a work about easy consumption for the eye and mind, made at a high-point of American consumerism. So with that, let’s tuck in!

One thought on “A Big Spread”