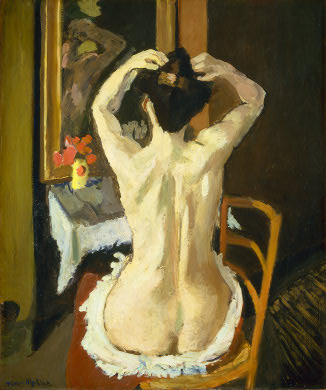 With off-putting predictability, the new year has brought with it its usual glut of diet obsession. Bookstore shelves are once again groaning under the weight of hefty tomes promising to transform our bodies and lives in 2010. From the New York Times Bestseller You on a Diet to Fat Flush for Life (1 million copies sold), it seems we’re all being pushed onto the faddy food wagon.

Americans spend millions each year on weight-loss products, with the diet industry getting a huge boost in January. But, before we all embark on another program, the question surely remains as to how much of our time, effort and money should go into pursuing the body beautiful. Certainly, it’s good to be healthy and “eat clean”, but beyond that, at what point do we say stop! to all the books, pills and gadgets that have us so stressed out about our physical selves?

The French painter Henri Matisse (1869 – 1954) might just be able to help. Back in 1901 he created La Coiffure, an enchanting work showing a woman seated at her toilette. She’s pinning her hair with a golden clip and has just bathed (or might be about to) since her towel has slipped down. The understated beauty in this picture comes in part from the pared-down color palette of flesh and brown tones (the vase and flowers on the table-top provide the only color ‘pop’). The brushwork is soft and broad, with bands of paint defining the woman’s back and her bedroom setting.

It’s hard to believe that this was painted at a time Matisse despaired of ever making a living from art, when he was still looking to other artists such as Paul Cézanne (1839 – 1906) for guidance. In fact, Matisse bought Cézanne’s Three Bathers (1879 – 82, now in the Musée des Beaux Arts, Paris) in 1899 and it became an important influence on La Coiffure. We see this in basic terms (similar subject matter of nude women), the paint application (figures and settings hatched out with comparable loose, squared strokes) and the limited yet harmonious color palettes.

But the best thing that Matisse learned from Cézanne is how to present a subject, both in body and mind. On the physical side, there’s the working with dark and light tones of flesh color (see how Matisse caresses into being the dip of his lady’s spine, the slant of her shoulder blades and the soft slope of her hips). Both artists held a deep reverence for the female form, irrespective of shape and size.

Then there’s the unselfconsciousness of Matisse’s sitter, perhaps the single-most intriguing thing about La Coiffure. In Cézanne’s work, the women are at ease, self-absorbed, not posed for our pleasure and in the same way Matisse’s subject is comfortable, caught in a moment of contemplation, seemingly unaware of our presence. Matisse goes so far as to afford her total privacy by befuddling her face in the mirror. What we now see is a woman caught in an instant of freedom: she’s unfettered by our gaze and judgement and thus she’s shed her towel and her inhibitions.

Can it be that this woman is comfortable in her skin? Can it be she’s confident in her physicality, as it is, whatever it is? It’s certainly interesting that when she’s removed from external pressures to look a certain way and released from the need to present her body to us, she seems happy just to “be”, with her hands by her head and her towel fallen down. Food for thought for all us potential dieters, perhaps. 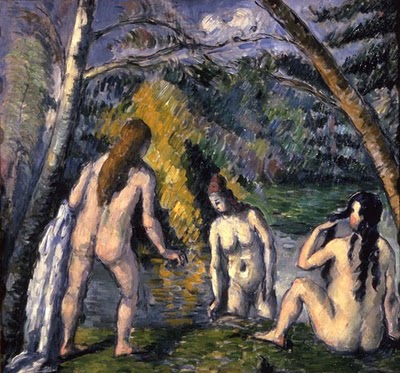 2 thoughts on “Lightening the Load”