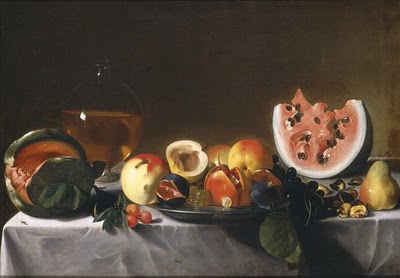 Are you good about getting your five-a-day, those portions of fruit and vegetables recommended by the World Health Organization? UK and U.S. governments are serious about promoting the benefits of daily fresh produce, confirming in informational and advertising initiatives that this intake is vital for a healthy and balanced diet. Websites are packed with recipe ideas, budget plans, even means for calculating the exact amount of fresh stuff an individual needs (based on age, sex and level of activity), all so that we can lower our risk of chronic illnesses like diabetes, cancer and heart disease.

Well fear not, for help is at hand. Who’d have thought that by looking at old art we can harvest tips on how to stock up on those fruits and veggies? Take this Still Life with Fruit and Carafe (c. 1610/20) by an artist known only as Pensionante del Saraceni. This painter was most likely a houseguest (that’s what pensionante means in Italian) of another artist called Carlo Saraceni (1579 – 1620), who lived and worked in Rome. Beyond his odd name, Pensionante remains unidentified. But in fact this hardly matters for today, since all we need from him is right before our eyes.

Take Pensionante’s interesting arrangement of foodstuffs. It looks naturalistic, with grapes dripping off the edge of the dish and chestnuts smattered across the cloth, but it’s also underpinned by a real sense of organization and geometry. Set along a simple horizontal axis, the objects create a pleasing pattern of rounded forms, from the silvery sliver of the edge of the carafe, to the robust peel of the melons and the globes of fruit in the centre.

He’s selected his subjects carefully, packing the picture with a rich variety of fruits: apples, pears, figs, melons, grapes, pomegranate, figs, chestnuts and even (I think) some cherries in the left foreground, all jostling for space on the table top. This visual feast is lit from the side (see how the corner on the left blazes white), with highlights sensually softening the contours of the fruit (the apple on the left side of the dish) and making it glimmer (white and purple grapes).

It’s also interesting to see how Pensionante places all of his produce close to the picture surface (besides the overlapping of forms, there is very little recession). He’s shaded things to make them reach out at us (the lip of the dish and that large leaf curling off the table’s edge). It’s as if we could enter the picture and pluck the fruit right off the table. And it seems that now’s the time: from the split figs to the sliced melons and bursting pomegranate, Pensionante has picked fruits all in perfect ripeness.

It was thought for a long time that still life painting was invented in Holland in the 17th century (after all, the Dutch word stilleven was adopted into English as “still life”). But in fact it is now widely believed that the first still life in Europe since antiquity actually came from an Italian hand, that of Caravaggio (1571 – 1610), whose ground-breaking Basket of Fruit was painted in Rome, c. 1599. Our Pensionante might well have seen Caravaggio’s tumble of fruits and leaves and learned from it.

In my mind, Pensionante’s painting is just about the best advert for fresh fruit you could ever hope to find. From him we see that presentation, variety, accessibility and seasonality are all vital in getting us to get our five-a-day. 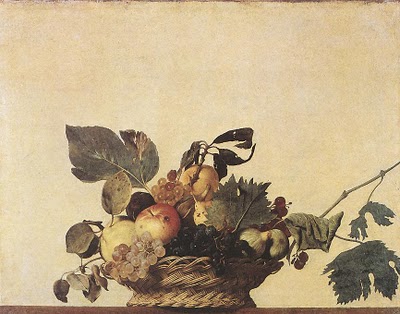