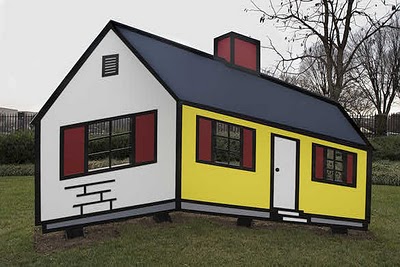 Research shows that moving house is one of the most stressful things we do in our lives, right up there with divorce and bereavement. Not only is there the tension that builds up as moving day approaches, but there’s also weeks of boxes and duct tape pre-move and the months of “honey, where did you pack my phone charger?” post-move to contend with.

We’re moving today. Not a major one (we did that when we arrived from London in November) but a minor one, from a corporate apartment to a new home in another part of town. The good thing is we didn’t have much to pack. The bad thing is we were met this morning by all our things from England and were instantly swamped by a deluge of boxes. I guess a move’s a move, big or small.

Moving house has made me think of House I, a large-scale sculpture by Roy Lichtenstein (1923 – 1997), in the National Gallery Sculpture Garden. It’s based on a 1996 model by the artist, which was fabricated from aluminum and paint in 1998 after his death.

A painter, printmaker and sculptor, Lichtenstein was a leading practitioner of Pop Art. His style is highly distinctive – based on images of cartoons and advertising logos – and supposedly came about in 1960, when one of his children said, pointing at a comic strip, “I bet you can’t paint as good as that!” Lichtenstein’s first Pop picture Look Mickey dates from 1961 and is also owned by the NGA.

House I reveals the hallmarks of Lichtenstein’s style: simple forms drawn in thick black outlines, filled with bright primary colors. It’s appealing to look at: clean lines and clear colors give a sense of order and confidence. But there’s a surprise in waiting: while most of Lichtenstein’s sculptural works look almost like freestanding paintings in relief, some of his later works (including this one) start to exploit volumetric and illusionistic effects in three dimensions. This is surely the best thing about sculpture: it exists in space, so you get to move around it. As you pass this work, something surreal happens: what initially looked like flattened 2D forms warps, as the side of the house at once projects towards the viewer while also appearing to recede into space. It’s a mind-boggling effect, as you’ll see in the video.

It was in his student days at Ohio State University that Lichtenstein first came under the influence of Hoyt L. Sherman, an artist and professor who focussed on exploring the nature of human vision and perception. It seems Lichtenstein never lost this fascination his whole life.

I think adopting a measure of interest in ‘seeing’, and thereby acknowledging how we perceive things, can help us, especially in the challenging days of moving house. Because sometimes things that look easy turn out to be tough, and sometimes things that look difficult at the outset end up being more simple than you first thought. And when you’re sitting on the bare floor of your new house, with nothing more than a delivery pizza and wine from plastic cups to share, you will know that it was all worth it.