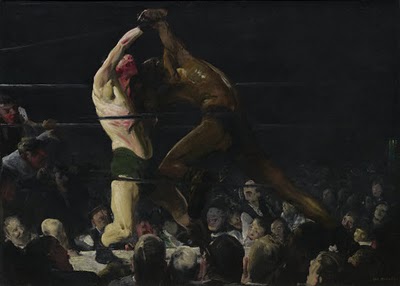 Today is Martin Luther King Jr. Day in the United States, a holiday that marks the birth and celebrates the life of the iconic godfather of the American civil-rights movement. As one of only four U.S. federal holidays that commemorate an individual, today records the important role King played in this country’s history.

This remains a thought-provoking day, with no place in D.C. more powerfully linked to the memory of King than the Lincoln Memorial, site of his famous I Have a Dream address in 1963. That speech followed months of campaigning to end segregation in Birmingham, Alabama, where at times protests had become violent, with both demonstrators and policemen using extreme force.

Today’s picture conveys some sense of the violence that came to be a part of the African-American civil rights movement. Both Members of this Club (1909) is by the American artist George Bellows (1882 – 1925). The painting shows a bout between two boxers, one white and one black. The work was inspired by real fights that Bellows attended at an athletic club in New York. Since such matches were illegal in the city at the time, private clubs made fighters a member for the night to get around the law. For me, in the context of today, the title of this painting is evocative in that the two subjects are united by their membership, as boxers both, not defined by other factors.

By the end of the 19th century, the U.S. had forged its burgeoning history, bloody and proud, and a distinctive American style of painting soon followed. An artist like Bellows is classed as a Realist, painting the raw vitality and survival instincts of New York’s lowest classes (and by association, modern America). You can almost hear the heavy suck of air as Bellows picks out the heaving rib-cage of the white fighter with heavy gashes of beige paint that bubble in places with pinkish blood. Every muscle in the white man’s raised right arm bulges and strains: Bellows clearly paid attention in anatomy class.

The overall composition is dominated by the shape of the black fighter’s body. A sinewy line that travels through the elongated leg, over the arching back and up to the knotted left arm creates a rocketing diagonal that gives the picture an explosive energy. The contrasting skin tones of the two accentuate the lop-sidedness of the triangle their bodies together create. It’s precarious, this instant of teetering balance that’s captured, resulting in an ominous feeling of impending crash and boom.

What’s perhaps most chilling is the ‘invisibility’ of the fighters. The white man’s eyes are lost (all we see are bloody stains covering his chin), while the black man’s features blur with the background as he burrows his head into his opponent’s chest. By contrast, notice the eery faces of the audience gathered round: a gallery of ghostlike visages leers gleefully at the struggle in the ring. In front of this baying crowd, our fighters have become faceless arbiters of aggression and hate.

Bellows followed the advice of his art teacher to “express the spirit of the people today.” His gutsy subject matter and bold brushwork tell a story of the great human drama that can unfold in the lives of ordinary people. For all those commemorating King’s life today, thoughts will surely also turn to those ordinary people whose lives were touched – in a big or small way – by one of the greatest dramas of American history. 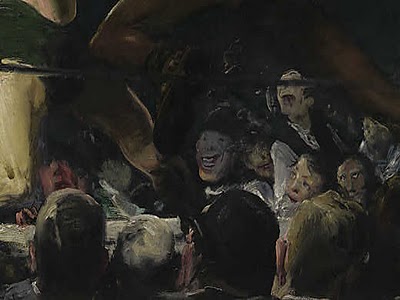