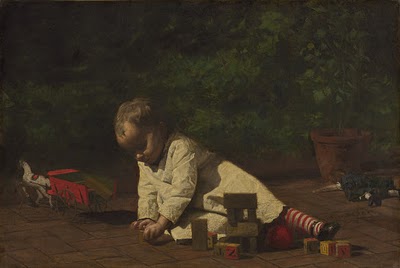 Babies will be more intelligent if their mothers view works of art while pregnant – at least according to one Russian museum. In St Petersburg, women are joining art tours in hopes of broadening their unborn baby’s mind. This intra-womb education program was conceived by a Russian psychologist who believes that Mums-to-Be should look at gentle, beautiful images to send intellectually stimulating impulses to Baby.

One artist in the NGA who was intrigued by the stages of a child’s intellectual development (albeit from birth) is Thomas Eakins (1844 – 1916). Like Bellows from yesterday’s post, Eakins was an outstanding 19th century Realist painter. His picture Baby at Play (1876) is one in a series of family portraits he created in the 1870s and shows his two-year-old niece, Ella.

Instantly eye-catching is the size of the baby: Eakins creates Ella life-size on the canvas, which makes her very present. He uses his understanding of the human body (acquired in anatomy classes while studying at the Pennsylvania Academy), to give the tot an uncanny realism. See her sausage-like fingers and dimpled knuckles. Eakins is good when it comes to shading to lend a thud of physical baby weight. Ella’s lit from top left, so we get the crown of her head highlighted and her round cheeks caught in a glare. Parts of her embroidered dress are cast into shadow, but we get a nice clear view of her fantastic striped tights. The entire painting is composed around the central pyramid of the baby (a shape echoed in the stack of wooden blocks), lending an air of tranquility.

It’s remarkable, when considering this picture, to think that before the 19th century children barely featured in painted portraits. They’d get a look in if they were the offspring of royalty, rulers or gods but even then, children were presented as mini adults, trussed up and looking serious. So little Ella, caught off guard in an informal setting, is still something of a novelty in her time.

And that’s before we’ve considered the best thing about this picture. You see, Eakins was always fascinated by the ways in which we absorb information and assimilate behavior (he was a teacher as well as an artist). In his hands, this painting becomes more than a cutesy toddler snap and evolves into an insightful record of the early stages of intellectual development. First, he lowers our vantage point, bringing us down to Ella’s level, which helps us relate to her more directly. Next, see how he’s captured her casting aside the infantile doll and horse and cart: instead she’s studying some alphabet blocks. Could it be we’re witnessing Ella make first contact with the adult world of letters and language? In any case, Eakins gives us a rare glimpse of the challenges of early childhood, seen in the intense concentration on the baby’s face.

Was Ella exposed to art while still in the womb? Who knows. From the way she’s getting to grips with her ABCs, I’d hazard a guess and say yes. But whether any of us “saw” pictures before we were born or not, it’s never too late to start gaining from art. 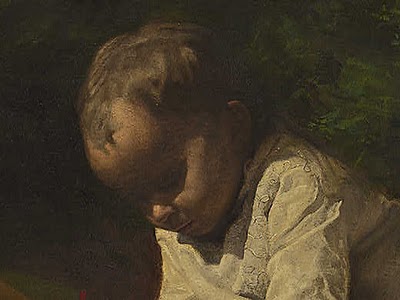 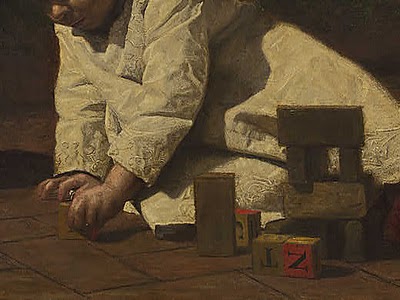