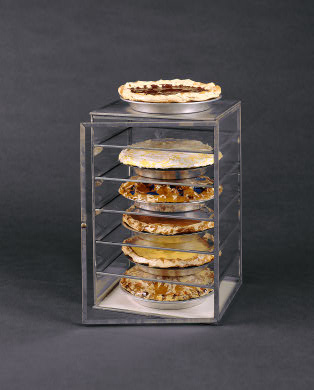 So what will it be? Thin ‘n’ flaky or thick ‘n’ crusty? Apple, blueberry or peanut butter chocolate chunk with extra whip on top? You’d better pick your favorite quick, because today is National Pie Day in the States! It’s a day we owe to the American Pie Council (APC), an organisation committed to raising awareness, enjoyment and consumption of pies across the country.

I’m learning there’s a distinct pie heritage that flavors the American experience. Pies are a sweet constant of life in the US, baked into the rituals of family and community. Recipes are passed from one generation to the next and pie plates and utensils become family heirlooms. Most of the major festivals here feature some specific pie: pumpkin or pecan at Thanksgiving and apple on the Fourth of July. So today of all days is really the time to slice up and indulge in a piece or two of pie.

But before you hit the bakery or start rolling out your pastry, feast your eyes for a moment on today’s work, Glass Case with Pies (Assorted Pies in a Case) from 1962. This is by Claes Oldenburg (b. 1929), one of the most original artists working in the US. He’s famous for his giant sculptures of food and for his soft sculptures of typically rigid objects. Born in Stockholm to a Swedish diplomat (he became a US citizen in the 1950s), Oldenburgh moved to America as a young boy. He lived in New York and Chicago growing up and studied at Yale before settling in New York.

His stack of pies is an experiment of sorts. He’s seeing what happens to an everyday object when you change its make-up and alter its environment. Will the pies still be pies? He hasn’t made these with flour and eggs, but with burlap (a hessian-like material) soaked in plaster, arranged in tins and painted with enamel in ‘pie’ colors. There’s a double-crusted chocolate on top, lemon meringue under that and blueberry under that. Pumpkin next? Custard below that? I’ve yet to determine the bottom-most flavour but we get the picture: these are almost pies in our eyes, looking quite life-like and good enough to eat. 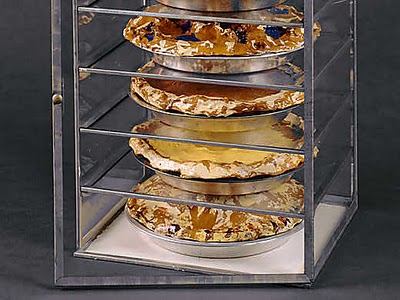 So it’s more their environment that’s challenging the pie-ness of the pies. Oldenburgh puts his models into a glass-and-metal case, which is set behind glass by the NGA. It’s interesting what occurs: since we’re not seeing the pies in a kitchen or bakery, he evokes our senses and somehow heightens them by not allowing us to do the things we’d normally do with pie (smell it, touch it, stuff it down our throat).

This is a whimsical work that reveals some of Oldenburgh’s artistic inspirations. There’s Dada, a subversive movement that emerged at the time of WWI, seeking to break down traditional values in art, replacing them with new forms of expression. There’s also Surrealism, beginning a few years later, which looked at the subconscious and challenged perceptions of reality by using dream-like imagery. By blending these references, and by re-constituting and re-homing his pies, Oldenburgh has us ‘seeing’ pie in a whole new way.

This is possibly one of the most enticing works in the NGA. As the Pie Council puts it: “There’s something touching about giving someone a gift as special as a pie.” President Obama cited “resisting pie” as his main personal objective for this year, but I’d challenge even him to resist the confections that Oldenburgh has cooked up. 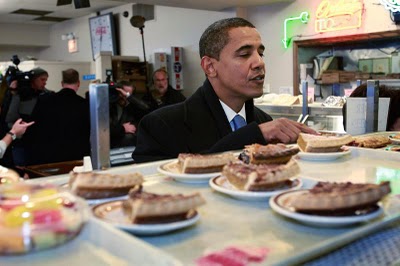