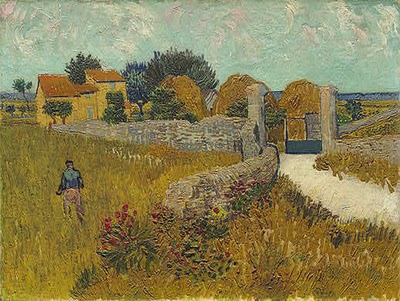 The biggest food trend of our time is surely sustainability. Where food comes from, who it goes to and how much there is to go round are all questions that have become familiar to most of us. Sustainability is the thing that has always underpinned the argument for buying organic, local and seasonal food.

Sustainability certainly makes sense, particularly in our ever-expanding world. There will be 7 billion of us by 2011, meaning meat-eating will continue to rise and fish stocks will continue to deplete. These are times that call for us to look very carefully at the world’s ability to feed itself.

Vincent van Gogh’s Farmhouse in Provence (1888) evokes a simpler time, when things at least appeared more abundant: this rural scene is ripe with life, bursting with health and growth. The son of a Dutch pastor, van Gogh (1853 – 1890) worked for an art dealer, as a teacher and as an evangelical preacher before devoting himself to painting with the same zealous insistence that he had brought to his sermons. In a career lasting only about a decade, he created some 1,000 paintings.

This picture – soaked with bold colors and studded with vigorous brushstrokes – reveals his strikingly original, intense style. It was painted during van Gogh’s time in Arles, a city in the South of France, where he’d gone in hopes of bettering his health and founding an artist’s colony. It was a wild and productive time for him: from the start of 1888 to his departure just under 15 months later, he produced more than 200 paintings.

It’s clear from this picture than van Gogh adored the sun in Provence: it bakes this view into a simplified, almost pattern-like state. His colors come to urgent life in these luminous conditions. A rich brown-yellow saturates the whole, plastering a sense of happiness and heat onto the canvas. Look how he sets up complimentary pairs for added vibrancy (green and red on the flowers in the foreground, pink and turquoise in the clouds and sky). These particular combinations combust the colors before our eyes. The dark outlines filled in with color (seen on the blue-black gate of the farm) reveal the influence of Japanese prints that the artist first came across in Paris.

The brushstrokes here are characteristic of much of van Gogh’s work towards the end of his life. We can see his markings clearly, since in most areas he worked with a brush heavily loaded with oil paint. The result is called impasto, thick layers of paint visible on the canvas. There are fat dabs for the red flower heads and linear dashes to denote the grasses. See how the clouds roll under his hand and how he literally seems to ‘weave’ the textured fence. It’s energizing just to look at this pulsating painting.

As many will know, van Gogh suffered from mental imbalance during his life and took his own life at 37. Despite his early demise however, he is a key figure of Postimpressionism and has made an indelible mark on modern art.

This painting bristles with van Gogh’s intense response to nature, which might just reinvigorate our current endeavors in pursuit of global sustainability. Whether you subscribe to sustainability or not, now is the time to assess our over-consumption and come up with solutions for a more fertile future. 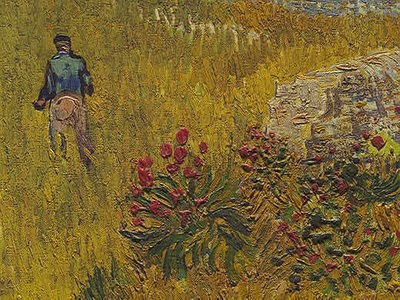 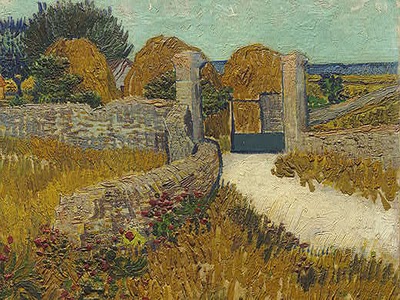