Today is Robert Burns Day, commemorating the life and work of the Scottish Romantic poet Robert Burns (1759 – 1796). Regarded as the national poet of Scotland, Burns is the man who wrote Auld Lang Syne, a song sung at New Year’s celebrations around the world.

Throughout Scotland and Northern Ireland (and in Scots and poetry societies everywhere), tonight will be given over to a Burns Night Supper, which have been held annually since the time of the poet’s death. Whether formal or informal, a Burns Night Supper is always entertaining. Haggis (the national dish containing sheep’s heart, liver and lungs mixed with oats and simmered inside the animal’s stomach) is served as someone reads Burns’s poem Address to a Haggis. And as if that’s not enough to give you heartburn, there’ll also be lashings of whisky, further recitations and dancing into the night.

The NGA has a lively link to Robert Burns in the portrait John Tait and His Grandson (c. 1793), by the Scottish painter Henry Raeburn (1756 – 1823). The main subject, John Tait, was a lawyer and a friend of Burns, who he’d initially met through his sister-in-law. Tait entertained the poet at his estate in Ayrshire in 1787. John’s son Crawford (whose little boy Archibald Campell is shown here) was also a friend of the poet.

This painting brilliantly reveals the way that Raeburn worked. Aside from a couple of months spent in the studio of Joshua Reynolds (the 18th century English painter), and a few years during which we think he traveled through Italy to look at art, Raeburn was largely self-taught. His works combine intuition with raw talent and demonstrate his highly personal technique.

See the loose application of paint in the flickering oranges of the background and the juddering brushstrokes that mark out the shapes of the leaves. Looking at John’s face we get a tangible sense of personality, from his open gaze and the turn of his lips. It’s such a skill, to be able to map out a face and hair with a sparse series of strategic strokes as Raeburn does here. This is a technique he developed called “square touch”, which is free brushwork without underdrawing.

The arrangement of this picture is clever in that it makes us interact with the sitters. Raeburn sets John’s chair at an angle and crops the bodies of his sitters, creating the illusion that we are in their company. His points of interest and expression (their faces and hands) are placed on a clear diagonal. The natural interplay between these two is touching: Grandpa dangles a pocket watch while Archie toys with the chain. See the compositional harmony created by the juxtaposition of their hands. What a wonderful move also to frame the little boy’s face with his upraised arm, allowing us to gaze at leisure at his glistening eyes and apple-red cheeks.

Raeburn became the leading Scottish portraitist of his day, with even royalty clamoring for his talent (he was knighted during George IV’s visit to Scotland in 1822 and subsequently appointed King’s Painter for Scotland). Such accolades seem fitting for an artist who can whip up the kind of fresh, life-like portrait we’ve been looking at today. Pairing old with young and suffusing the lot with a hearty family glow, this is just the thing to warm us up on a cold Burns Night. This and dram of whiskey, that is. 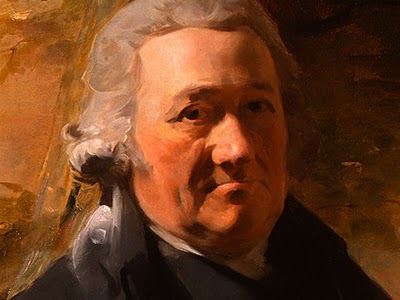 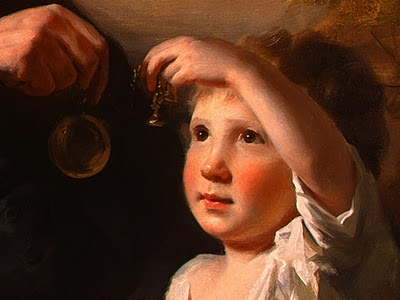