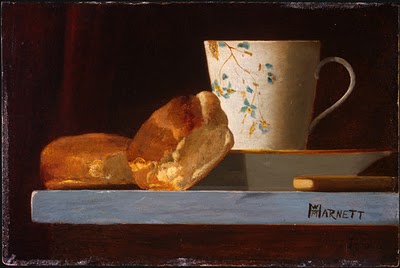 Granola grasped by the handful mid-morning. Trips to the cookie jar with afternoon tea. Late-night fridge foraging for chunks of cheese. Whatever’s on your nibbling list, it seems we’re all obsessed with a little light snacking. Between 1977 and 2002, the percentage of Americans eating three or more snacks a day increased from 11% to 42%. That’s quite a rise, especially considering it wasn’t so long ago that there weren’t any snack machines on your office floor and gas stations sold only gas. These days there’s food everywhere and we’re bombarded by opportunities to munch around-the-clock. The US consumed $68 billion in packaged foods in 2008, which sounds to me like a serious snack habit. But then again, when hunger pangs strike at those in-between-meal times, and a doughnut is winking at you from the stand, it’s ever so hard to resist a snack attack.

One artist who’s definitely not helping is the American John Fredrick Peto (1854 – 1907). The effect of seeing some of his paintings at the NGA is like walking around the supermarket on an empty stomach: you get distinctly peckish. Peto was a still-life artist and painted food most convincingly, Breakfast (c. 1890s) being a case in point. Peto trained at the Pennsylvania Academy of Fine Arts, where he was influenced by the Irish-American painter William Michael Harnett. See the Harnett signature bottom right of this picture? This was was believed to be by him until 1949 when art historical studies revealed that a number of Harnett-attributed paintings in private collections and museums were in fact by Peto. As the attributions got straightened out, interest in Peto grew and he emerged as a gifted painter, with loose brushwork, warm tonality and an aura of subtle melancholy.

Breakfast is simple yet mouth-watering fare. There’s a pretty cup and saucer, embellished with a meandering floral design. The handle of what must surely be a knife lies to the right of the arrangement. Then, and this is the good bit, there are two buns placed at the edge of the table. One’s even balanced on the rim of the saucer, so we can better admire it’s crusty top and shell and the soft dense dough inside.

Both Peto and Harnett were masters of what’s called trompe l’oeil (or “fool the eye”), a genre of still-life that aims to deceive the viewer into mistaking painted objects for reality. In Breakfast, Peto is depicting his objects in accordance with a set of rules unique to the trompe l’oeil genre. For example, he’s represented the cup and bread life size and he’s avoided cutting off the objects (save for the knife), as this would suggest the depiction isn’t real. The main technical device he uses is to arrange the subject-matter in a shallow space. Notice how he’s bunched the objects right up against the picture plane. Then he’s shaded things (see the saucer, for example) to suggest roundness and depth without our eye actually seeing real roundness or depth.

This is how, with artistic sorcery and a little reliance on the fallibility of human perception, Peto tricks us into thinking there’s a snack waiting on the table. A hot tea or coffee and some fresh warm buns. See what I mean? He gets the taste buds going. But as long as we’re snacking on art, I don’t see a down-side. 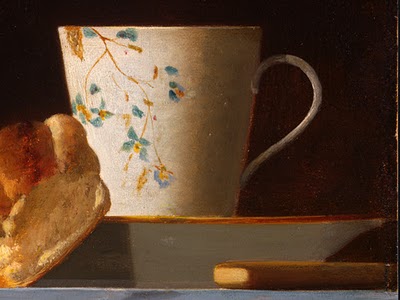