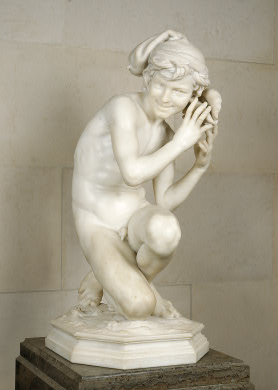 Something magical is happening in our times. Slowly and subtly, since the big recession settled in, there’s been a shift in thinking and priorities. Before, we’d all spend after work and at the weekends, buying products to please us and experiences to entertain us. Now, with workloads cut and incomes reduced, it seems we’re looking for ways to have fun and good times for a fraction of the previous price. A recent New York Times/ CBS News poll found that nearly half of Americans are now doing more with friends and family. People are once again discovering the simple joys of gardening, cooking, reading and other hobbies and there’s a new focus on DIY projects around the house and getting stuck into community activities. Suddenly, people are creating a whole new ethos on how to spend time in rich and meaningful ways, without serious costs attached. All it took to get us here was the greatest recession in living memory.

One artist at the NGA who captures the spirit of this new way of thinking is the French sculptor Jean-Baptiste Carpeaux (1827 – 1875). His marble Neapolitan Fisher-boy (1857 – after 1861) is a celebration of free and simple pleasures. Carpeaux was the son and grandson of stone masons and showed promise from a young age. In 1854 he worked as a sculptor on the renovation and expansion of the Louvre in Paris. He was awarded the prestigious Prix de Rome scholarship the same year, and he left to study in Italy in 1856.

This work wasn’t commissioned, Carpeaux just felt inspired to make it. He claimed he based it on a boy he’d seen during a trip to Naples. As a sculpture it brims with exuberant energy. The boy’s bent his knees and is crouching on the ground. We can only imagine he’s scooped up that shell from the city shores. There’s a freshness to the pose that has a lot to do with the split-second balancing act Carpeaux portrays: a second later and he might tumble to the side. And yet it’s balanced (the legs swing to the left and the body to the right) so that the composition ‘works’ overall.

Carpeaux was a provocative artist and in the habit of challenging academic traditions in sculpture. He avoided the serenity of the classical works that were still popular in his day. So here his subject is an exotic little character from the rough streets of Naples (as opposed to some calm and beautiful god or goddess). He adds a local-style hat for authenticity and ring of lustrous locks escaping wildly from underneath. See the detail and definition of the boy’s anatomy. These are all things that give the work a distinctly ‘new‘ sense of life. Carpeaux submitted a plaster model of this work to the French Academy while still a student in Rome and carved this marble version several years later. When it showed at the Salon exhibition of 1863, it riveted audiences and helped brand him an emerging star.

What’s so captivating here is the intensity of the boy, hunkered down, arms tense, fingers splayed. He’s caught up in a moment of sheer delight, listening for the sounds of the sea, filled with mischief and intrigue. What a magical moment for a sculptor to see, earthy and everyday though it may be. His vision can resonate with us as well, suggesting a low-cost wealth of experiences that await, if only we take care to find them.