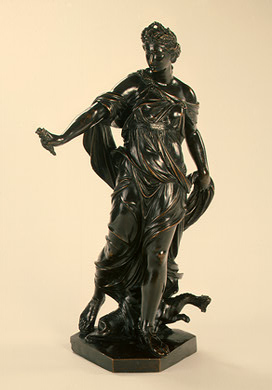 There’s an ancient Greek myth that’s well-suited to this time of year, when the cold keeps snapping and we’re wondering when milder weather will return. It’s about the goddess of spring Persephone, and her mother Ceres, goddess of grain. Wherever Ceres walked, cornfields sprang up ripe and ready for harvest. As Persephone skipped beside her, she’d coax the fresh young shoots into life.

On the day our story begins Persephone was on a mountain side, singing to the wild flowers. She hardly noticed as a dark shadow crossed the sun: this was Pluto, king of the Underworld, in his dark chariot drawn by horses. When Pluto saw Persephone he wanted her for himself, so he swooped down, snatched her and dragged her off underground. Far away, Ceres heard a faint cry and ran, panic-stricken, to where Persephone had been. All she found were trampled flowers. She cried out and began a frenzied search for her daughter.

French sculptor Michel Anguier (1612 – 1686) chose to cast this moment in his sculpture Ceres Searching for Persephone (model 1652, cast 1652 – 70s). Anguier was born in Normandy but moved to Paris at 15. He spent the 1640s in Rome, living in an artists’ colony. While there he did some work under the Italian sculptor and architect Bernini, carving relief decorations for the interior of St Peter’s basilica. Italy gave Anguier a love for classical art and subjects, traceable in this work. Some things look classical (Ceres’s sandals, hair and wreathed head), but there’s a level of emotion in her face and that jutting right arm (only possible in a material such as bronze, which has tensile strength) that reflects 17th century taste. See also the dragon (emblem of the Underworld?) snaking at her feet for added tension. This figurine stands a mere 54cm tall and yet packs a visual punch. Light glides over the burnished surface of the bronze, which is riddled and rippled with finely-cast detail. Ceres’s draperies swirl over her shapely form, leading the eye in feverish movement that reflects the urgency of her hunt.

Persephone was distraught in the Underworld. Pluto tried to cheer his queen with gifts, but she turned them away. When he offered her food, she refused to eat. Above ground the earth had suffered through her absence. Leaves had fallen from the trees, fruits failed to grow and nothing ripened on the bough. Grasses turned brown and flowers died. Eventually, seeing all this, king of the gods Zeus ordered Pluto to return Persephone: he said that since she hadn’t eaten while in the Underworld, she was unconnected to it and thus she could leave.

Unwilling to relinquish his bride, Pluto turned to cunning. As she was on her way out, he gave Persephone a pomegranate, cajoling her to taste just a little. Hungry and relieved to be on her way home, she counted out six seeds and ate them slowly, one by one. This changed everything: when Zeus got wind of it he decreed that Persephone would now have to spend six months of every year in the Underworld, one month for each of the seeds she’d eaten. So it was that the seasons were born. When Persephone is in the Underworld nothing much grows above ground. But when she returns to Ceres for the rest of the year, the earth springs into life as she pushes plants, fruits and flowers to flourish.

This myth, so laden with emotion, is the source for Anguier’s miniature masterpiece. Today, both story and sculpture can open our eyes to the age-old rhythm of winter ceding to spring. It’s just a matter of when. 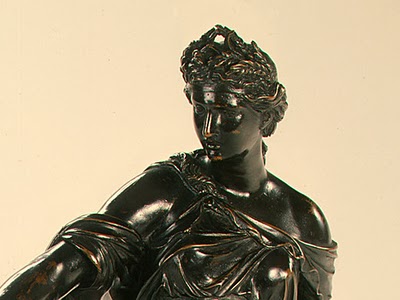 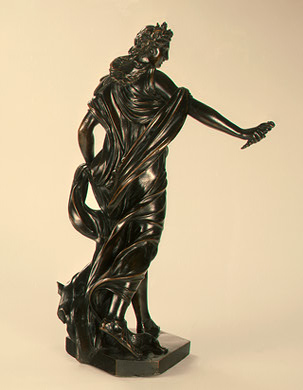