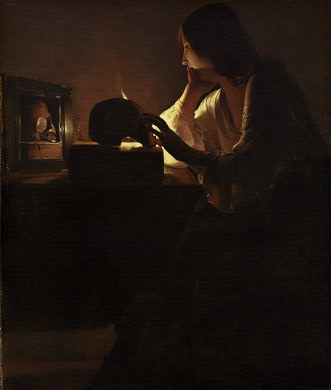 Today is the Feast of the Presentation of Jesus at the Temple, relating to an early episode in Christ’s life. Mary and Joseph took Jesus to the Temple in Jerusalem 40 days after his birth to complete Mary’s ritual purification. On entering, they met Simeon the Elder, who’d been promised that he “should not see death before he had seen the Messiah of the Lord” (Luke). On seeing the baby, Simeon’s prayer prophesied the redemption of the world by Jesus: “He is a light which will shine for those who do not know God.” This day is also celebrated as Candlemas, when candles are blessed for use in church throughout the coming year.

There’s an artist at the NGA known for his sublimely evocative depictions of candlelight. His name is Georges de La Tour (1593 – 1653) and the few facts we have about his life indicate that he enjoyed a successful, somewhat low-key career in his native Lorraine (now part of France, but at this time an independent duchy). This work The Repentant Magdalen (c. 1635/40) shows that de La Tour, like many artists at the time, was indebted to Caravaggio (1571 – 1610), an Italian painter renowned for powerful scenes and dramatic lighting effects. Caravaggio’s influence was spreading throughout Europe in the early-mid century after his death, with followers posted all over Europe.

And yet de La Tour was no slavish imitator: here it’s clear that beyond the obvious trademarks of the Italian master’s style, he imbues this painting with his own sense of grandeur and solemnity. The Magdalen was supposed to have led a sinful life until her sister persuaded her to listen to Jesus, after which she became a devoted follower of Christ. Here she’s sitting at a table, propping her head in her hand. With her left hand she touches a skull, also reflected in the mirror in front her. Both skull and mirror are vanitas symbols, or emblems of the transience of life. These assembled objects, matched with Mary’s brooding expression, fill the picture with an intense sense of contemplation.

What is of course most breath-taking here is the candle-lighting. This is a nocturnal scene, lit by one flame dancing from behind the skull. Because the wax and wick are shielded from the viewer, the setting and subjects are shrouded in a mysterious demi-glow. Sharp shadows cut across the Magdalen’s cheek and right hand. See how the the skull proper is silhouetted while the eyes and nose cavity glimmer ghoulishly in the mirror. There’s something spine-chillingly inventive about making the scene so dark and limiting the colors so drastically. By using a single light source, de La Tour carves out simple masses in a sparse yet effective way.

The 17th century church held Mary Magdalen up as a repentant sinner. Within this context (and bearing in mind that de La Tour was from a strong Catholic community), the candlelight becomes almost like a spiritual balm, absolving Mary of her demons and revealing to us the flickering light of her spirituality. But this picture is transformative for another, much more physical reason. When standing in front of it, because of the shrouding gloom, your eyes literally have to “get used to the dark”, just as they would in a room lit by a single candle. What a mesmerizing way to draw us into the picture. And what a way for us to mark Candlemas today.

One thought on “By Candlelight”