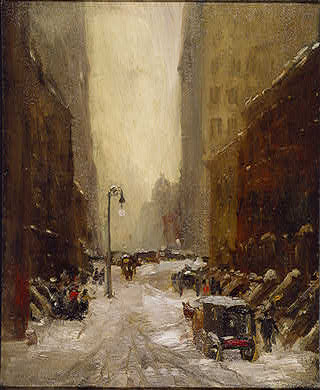 Yesterday was Groundhog Day in North America. It’s when groundhogs are said to come out of hibernation to check the weather. If it’s sunny, the animal will see its own shadow, get scared and burrow back in its den for another 40 days. If on the other hand it’s cloudy, the groundhog won’t be frightened by its shadow and will be content to stay above ground, indicating an early spring for us all. The largest Groundhog Day celebration here is held in Punxsatawney, Pennsylvania, where crowds can reach 40,000. Yesterday Phil, the town’s resident groundhog (made famous in the 1993 film Groundhog Day), predicted more cold weather for the States: “as the sky shines bright above me, my shadow I see beside me: six more weeks of winter it will be!”

So it’s with the animal’s prognostication still ringing in our ears, and the snow falling softly in Washington DC, that we turn to today’s picture Snow in New York (1902) by the American painter Robert Henri (1865 – 1929). Henri was a member of the Ashcan School, a realist art movement that came to prominence in the early 20th century. Members of the School were known especially for paintings portraying scenes of daily life in New York’s poorer neighborhoods.

This cityscape oozes a weathered sense of the everyday. It’s very spare in its use of color, almost monochrome, with the picture surface divided into distinct patches. There are the dark tones of the brownstone apartments and lighter areas for the city blocks of office buildings behind. There’s the yellowing winter sky and the brighter snowbound street. This schematic cutting up of the canvas settles a sense of stability and calm into the picture, so that looking at it, you get that magical hold-your-breath hush that often accompanies a snow-fall.

The oil paint Henri used here sits in hardened ridges and rivulets on the picture surface. While he first studied art in Pennsylvania, Henri went on to spend a good deal of the 1890s in Paris, where he was taken by the daring brushwork of the French artist Eduoard Manet (1832 – 1883). Manet avoided subtle gradations of tone and smooth finish, working instead in blocks of color with expressive brushwork. We can read Henri’s brush movements in the snow banking at the sides of the street, or the tracks running in the ground.

Henri also looked at 17th century Dutch realism for ideas. See the dirty greying slush that has sullied the fresh fall and the yellowing mush on the carriage wheels. There’s a dreariness in the presentation of the buildings and a sense of daily-grind that suggests the artist’s desire not to idealize. There’s also a feeling of immediacy here, brought into further focus by the inscription of the exact date March 5 at the lower left side of the picture, suggesting perhaps that this was painted in one go as an instantaneous artistic record.

Henri taught at the New York School of Art before founding his own school a few years later. He urged his students to focus on reality, even if it was banal or harsh. “Draw your material from the life around you, from all of it,” he said, “there is beauty in everything if it looks beautiful to your eyes.” So, even if we’re fed up with the freeze and sick of the sight of slush, if we listen to Henri, we might see fresh beauty where we didn’t before. 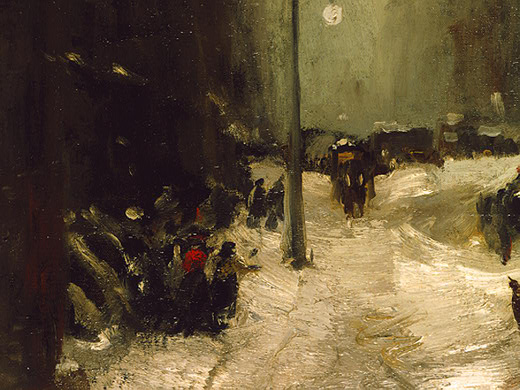