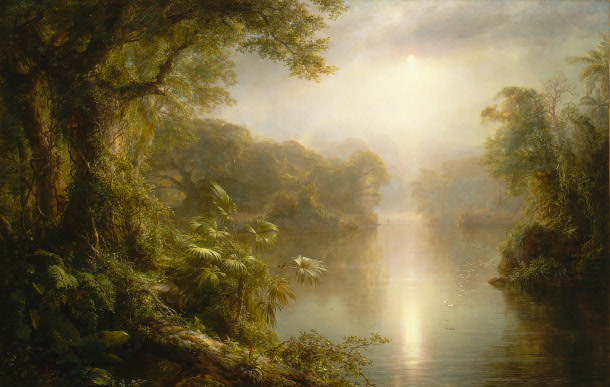 To some, February can feel like a drag. It’s cold outside and still dark a good deal of the day. There’s snow in trees in some parts, slush in the gutters in others. The warm cheer of December and New Year festivities is a distant memory and spring still seems quite out-of-reach. So this is the time to let your mind wander, away from your desk or your living room chair to far-flung and fabulous, less-February places. You might be thinking of glistening warm waters and light sandy beaches. Exotic animals and beautiful plants. The chance to lie out and soak up the sun. We’ve got the picture so clear in our heads, but how to turn it into a reality?

Luckily, help is at hand in the form of American landscape artist Frederic Edwin Church (1826 – 1900), whose crisp and clear style is just what we need to lend physical credibility to our fantasy trip. Born in Connecticut, Church was the first artist to study under Thomas Cole (1801 – 1848) – the leading landscape painter of his day – in the 1840s. Under his tutelage, Church became one of the most important of the second generation artists to emerge from the Hudson River School, the mid-19th century American art movement that created grand, romantic landscapes.

El Rio de Luz (The River of Light) dates from 1877 and is an imagined view, a sort of painterly collage, based on sketches and notes that Church made during a trip to South America in 1857. Church was a well-travelled artist, taking many extended trips abroad. He was particularly taken with Colombia and Ecuador, where he spent considerable time and where he first traveled in 1853 after reading the work of the naturalist Alexander Humboldt.

What’s so alluring is the pin-sharp detail of this visual scene, called forth convincingly from Church’s recollections. Even thought there’s been some time lapse since his South American travels, this view looks fresh and alive. There’s exquisite attention to detail in the exotic foliage, for instance. See the ferns in the foreground and the spongey mosses clinging to the tree. There are crackling vines and patches of dense undergrowth. In the middle-ground there’s a flock of flying water birds, caught in the vapors that rise off the water. As an artist Church was intent on capturing the wonders of the world, and recording accurately natural phenomena. He spent a good deal of time on scientific study and it’s his knowledge of optics, meteorology, botany, and ecology that so enhances a work like this.

But in addition to the keen naturalist’s observations, there’s an epic feeling of the sublime that saturates this tropical sunrise. The small sun, seen through a veil of cloud, sets up some stunning lighting effects. The whole scene is unified, bound together by a shimmering light that falls, picking out leaves, sitting on water and illuminating the sky. There’s harmony in the color palette of greens and yellows and a pleasing calmness in the composition.

Like his teacher Thomas Cole, Church was in awe of nature’s raw beauty and often made her look almost super-natural. Yet coupled with this, he fills his pictures with plenty of realistic details and a sense of tangibility. So if Church can call forth an image like this in his mind, what’s stopping us leaving on countless imagined trips this month? And failing that, you never know where a visit to an art gallery might take you.