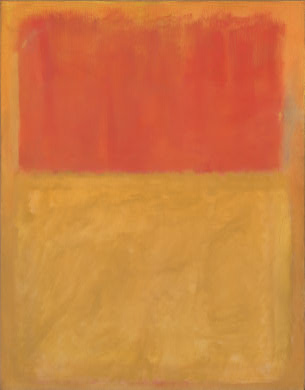 I’ve just started watching Mad Men and don’t know why it took me so long to cotton onto this sexy, stylish drama. For those who haven’t seen the series, it’s set in 1960s New York and revolves around an advertising agency (Sterling Cooper) and the professional and private lives of the people who work there. The characters are provocative and flawed and it’s fascinating to see how very different the roles of men and women were not so many years ago. The sets are authentic and the costumes delicious, especially those of Joan and Betty, who are always decked out in the elegant, feminine clothes of the era.

Since it’s set in the 60s, I was hoping for some mention of the art of the time, and it came midway through Season 2. Word gets around that Mr Cooper, senior partner at the agency, has bought a new painting. Unable to restrain themselves, some of the younger staff sneak into his office when he’s left for the day. As they approach the huge red-colored canvas on the wall, one of the men says simply, “it’s a Rothko.”

They’re talking about Mark Rothko (1903 – 1970), one of the pre-eminent artists of his generation and a leading figure of Abstract Expressionism (a movement that flowered in New York in the 1940s and 50s). Born Marcus Rothkowitz in Russia, Rothko emigrated to the US when he was 10. He lived in Oregon before studying liberal arts at Yale and then settling in New York for work.

The painting in Cooper’s office resembles some of the Rothko works at the NGA, such as Orange and Tan (1954) and Untitled (1957). Rothko painted as an Expressionist in the 1930s and a Surrealist in the 1940s before hitting on his Color Field approach by 1950. This style, which sees him covering large canvases with broad expanses of solid color, is the thing he’s most known for to this day. Both Orange and Tan and Untitled (1957) follow Rothko’s familiar format. These are big surfaces each showing vertically aligned rectangular forms, set within a colored area, or field. See how he softens the edges of the rectangles, to make it look as if they’re hovering above the canvas. The impression we get is of a shallow pictorial space. Rothko is a master of color, it’s the thing that helps him create his astonishing range of moods. The orange and tan are luminous and joy-filled, while the reds of the untitled work are more somber and insistent.

In the show, Cooper is asked what he thinks about his Rothko, and retorts angrily that his opinions are beside the point, all he knows is that the work will double in value in a matter of years. True enough: Rothko’s Color Field paintings were a huge hit and earned him international acclaim. He was asked to create a suite of just such paintings for the Four Seasons restaurant in New York in 1958. But the ad man’s money-centric take on Rothko’s work is far off the mark. Cooper sees nothing of the emotional resonance that Rothko’s paintings reveal, the alternately dark and radiant atmospheres that can crawl off his canvases. He’s blind to the nuances of the colors, the modulations from dark to lighter patches, the careful combinations of tones. You see, in his works, Rothko was looking to plumb the depths of human drama, to search for some truth in it all. How oddly fitting for a show like Mad Men, filled as it is with conflicted souls each seeking meaning in their own lives. 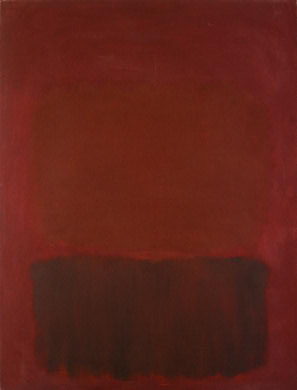