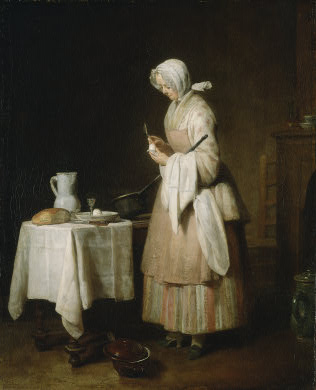 This week President Obama announced a healthcare summit to hasten the passage of healthcare reform legislation. Despite recent election setbacks for the Democrats, it appears that Obama won’t be walking away from his commitment to making healthcare affordable and universal in the States. Having been well cared for by the National Health Service (NHS) in the UK for most of my life, I can’t understand why anyone would want to oppose this sort of accessible system.

In honor of the President’s call for beneficial changes to America’s healthcare system, today’s painting from the NGA is The Attentive Nurse (1747) by Jean Siméon Chardin. Other than some informal training from a couple of history painters, Chardin (1699 – 1779) was largely self-taught. His early preference and skill in painting lay in still-life pictures in the Dutch tradition (along the lines of Adrian Coorte’s Still Life with Asparagus and Red Currants in Monday’s post). But Chardin gained even greater plaudits when he turned his attention to pictures of people from the 1730s.

The Attentive Nurse is typical of the kind of sober image that Chardin came to excel at. It’s a genre scene, meaning a snapshot of everyday life. The nurse shown here is caught carrying out part of her habitual work routine of preparing a meal for a patient. She’s standing with a cloth slung over her arm and a boiling pan balanced between her body and the table. I think she’s tapping or peeling an egg as we watch. There’s a sort of mini still-life on the table: the jug, glass, loaf and egg here are harmonious in hue yet diversified in shape and texture, with each object brushed into palpable presence. Denis Diderot, the French philosopher, art critic and writer, commented on Chardin’s ability to make things look real: “it is not … pigment that you mix on your palette, it is the very substance of objects.”

Of course let’s not overlook the real point of this painting, the nurse and what she stands for. Chardin shines a light on otherwise unseen actions of care and concern, making us aware of the dignity and beauty in everyday life, however hard and mundane. The nurse’s concentration on her work fills the picture with focus and feeling. Humble and modest subjects such as this by Chardin were popular with all classes of society, including the aristocracy. In part, their appeal rested on the precision of the artist’s brush and the well-observed details Chardin picks out in a scene. It’s also his colors, often soft and balanced and working together (as is the case here). But the thing that audiences find most alluring is the sense of order that Chardin’s works radiate, an austere arrangement and assembling of forms that somehow suggests that everything is just where it should be, in its proper place.

In his State of the Union address two weeks ago today, Obama hammered home his point about healthcare with some cautionary words: “… by the time I’m finished speaking tonight, more Americans will have lost their health insurance. Millions will lose it this year.” In this work, Chardin makes a visual case for the importance of quality care for people in need. It’s a message the artist painted from a place of profound empathy, having lost his young wife and a child to illness. As he alone brings our attention to this attentive nurse and her invaluable work, he seems to be saying: “I will not walk away…” 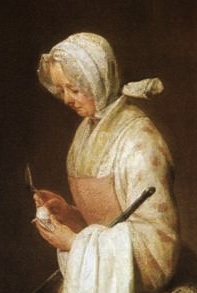