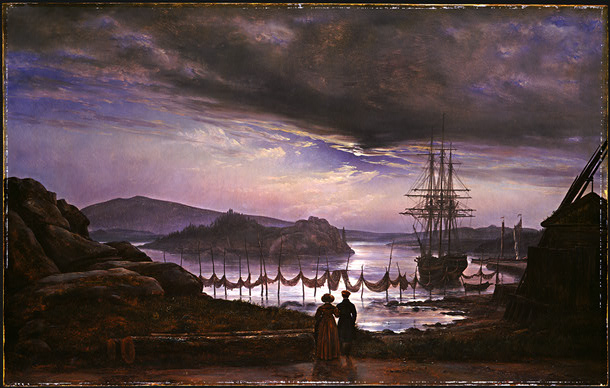 Sunday is Valentine’s Day, so it’s time to buy heart-shaped chocolate, soppy cuddly toys and that all-important card. We tend to connect our Feb 14 celebration with a man from ancient Roman times – St Valentine – and it’s tempting to believe that he wrote the first Valentine’s card. According to one story Valentine, jailed for marrying Christian couples in secret against the Emperor’s decree, fell in love with a girl who visited him in his cell. He wrote her a letter before his death and signed it ‘From Your Valentine.’

There might not be quite as much riding on your missive, but it’s still nice to get it right. There are tons of options out there, so surely it’s possible to find a card that expresses the way we feel? You can go for something sweet (‘Who needs wings when I’ve got you?’) or a little more sickly (‘Our love is like an enchanting, magical, dreamy fairytale’). Try something cautionary, perhaps (‘The feelings I have for you my love/ Give pleasure to my heart/ I pray that we will always be/ And never drift apart’) or more animal-inspired (‘Whoof whoof whoof/ Don’t be so aloof/ Hear my anxious whine/ Be my Valentine’).

If you’ve yet to find the perfect message, why not follow the old adage that a picture is worth 1,000 words? A work like View from Vaekero, near Christiania (1827) by Johan Christian Dahl (1788 – 1857) says a lot, with no words at all. Dahl was Norwegian and studied in Copenhagen, where he became interested in Dutch landscape painters like Jacob Ruisdael (who we looked at on Jan 9). From 1818 he settled in Dresden, Germany.

His painting here was inspired by a trip to Christiania (present-day Oslo) and reveals Dahl’s interest in Romanticism, the artistic, literary and intellectual movement that originated in Europe in the second half of the 18th century. Romanticism reacted against the Industrial Revolution and resisted the aristocratic social and political norms of the Age of Enlightenment. Romantic artists were keen to promote emotion as a source of aesthetic experience. So here, Dahl saturates the scene with feelings: there’s a tinge of melancholy (lugubrious setting, cool colors) and a twinge of fear (the couple appear all alone here). Mostly though there’s a strong sense of awe at a stunning natural site. This brings us to another key feature of Romantic art: celebrating the sublimity of untamed nature. Despite being painted from memory, Dahl’s painting projects fresh immediacy. Light radiates in the distance, causing the clouds to shake and shimmer and the water to turn glassy. The night-time mood and other elements in the painting (the cloud-covered moon, rocky inlet and misty hills) capture something of the unknowable, unmeasurable wonder of the place.

Dahl’s style of painting owes much to another artist, a German Romantic painter called Caspar David Friedrich (1774 – 1840). These two actually lived together in Dresden. Dahl owned a work by Friedrich (Two Men Contemplating the Moon, 1819 – 20), which exerted considerable influence on him. Sure enough, Friedrich’s work sticks to the Romantic ideals of emotion prompted by natural surroundings. The most interesting similarity, however, is that in both pictures, the pairs of people are shown from behind. With their backs towards us, they become generalized everyman figures, standing for all of us, looking at the horizon for some sort of meaning. It was this image that got me thinking about a new, more meaningful Valentine’s text, from the French writer Antoine de Saint-Exupéry: ‘Love does not consist in gazing at each other, but in looking outward together in the same direction.’ 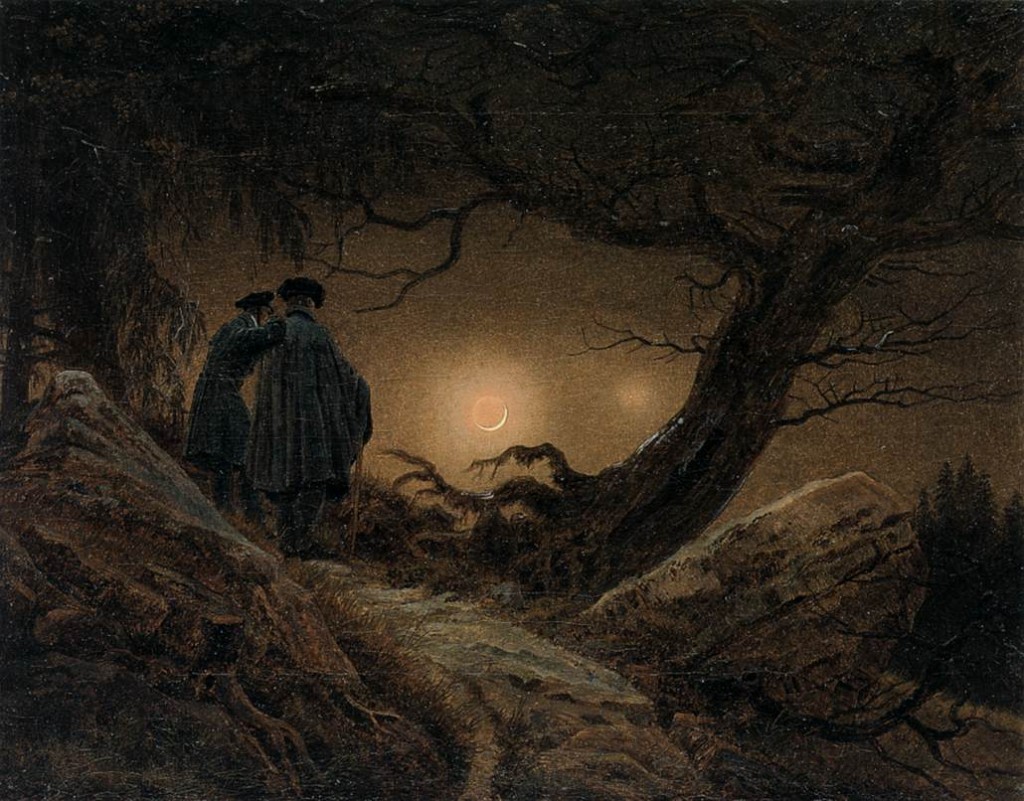 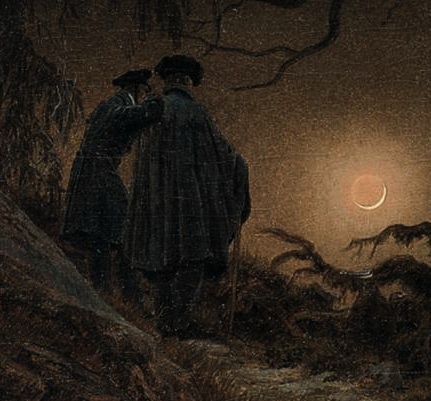