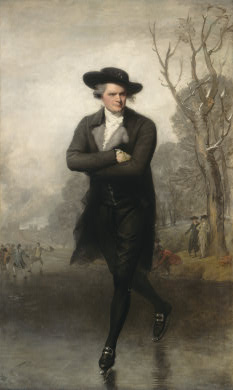 Today marks the start of a sports spectacular, the 2010 Winter Olympics in Vancouver. An event like this is exhilarating, combining spirited nationalism with human endeavor and skills, all set against a bright white backdrop of snow and ice. We’ll be transfixed for weeks as the skiers slice the slopes, the boarders turn tricks and the figure skaters spin gracefully. In fact, it might be that this year we’ll be more hooked than ever, since it seems that sports are changing for all of us.

Gone is the appeal of the sanitized gym environment as people head outside for more fun and nature as part of their exercise. Hockey out in the elements is coming back, with teams of players heading to frozen ponds and lakes where possible. Hikers are less content to stick to a well-beaten path and are veering off to make tracks in the wild. In the UK, swimmers have broken free from indoor pools to take the plunge in lakes and rivers, however cold and weed-ridden they may be.

Cheering on this fresh enthusiasm for outdoor pursuits is today’s painting, The Skater, by the American Gilbert Stuart (1755 – 1828). We looked at Stuart on Jan 5: his portrait of George Washington there was just one of an extensive series of pictures of high-profile sitters he depicted in the federal era. But before he got to all that, he had to hone his craft, which he did in England. It was the Anglo-American painter Benjamin West (1738 – 1820) who welcomed Stuart off the boat in 1775, took him into his home and trained him up as an artist. Stuart stayed in London for almost 20 years, returning to the States in 1793.

The Skater (1782) marks the end of Stuart’s apprenticeship to West. It was the artist’s first stab at full-length portraiture and brought him notice and acclaim. It shows William Grant, a Scotsman from outside Edinburgh. Stuart’s skill is evident in the fluent brushwork around the man’s face, working in his flyaway hair and the dewy flesh tones of his face. There’s a strong sense of character too, in the focussed gaze and the wry smile (West praised Stuart’s ability to “nail a face to the canvas”).

The thing that is most energizing about this picture is the skating – unorthodox in this sort of image at the time. Indeed, it was almost unheard of to paint any sort of vigorous movement in the British tradition of life-size society portraiture. Stuart writes that when Grant arrived at his studio he wasn’t keen to sit: “on account of the excessive coldness of the weather … the day was better suited for skating.” So painter and subject went off for some sport on the Serpentine River in Hyde Park. It was only later that Stuart hit on the idea of actually painting Grant in action, with Westminster Abbey in the distance.

So now, we have the startling fact of a life-size Grant sliding towards us on the ice. He’s got his arms crossed over his chest in typical 18th century skating form. The pose is balanced and looks physical and spontaneous, giving Grant an accessible and likable down-to-earth (or ice!) naturalness. The atmosphere is enhanced by the leafless tree and that thick whiteness of the sky, recognizably loaded with an imminent snow-fall. And don’t miss the small figures further back on the ice, twirling and gliding in high delight: seems the benefits of physical exercise outdoors are not lost on any of them either. 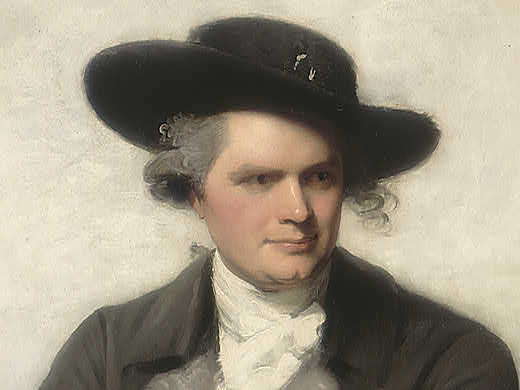 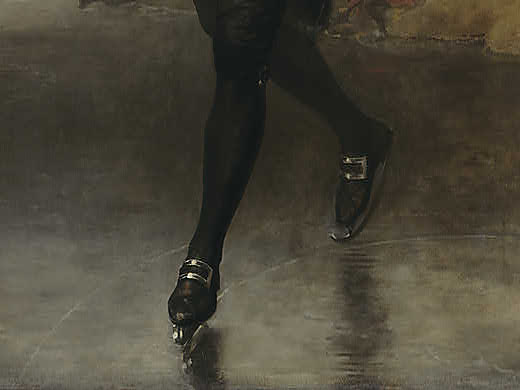 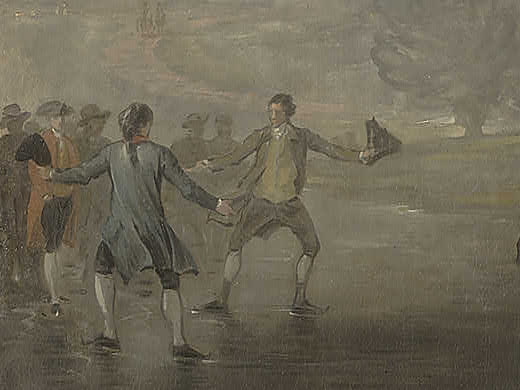