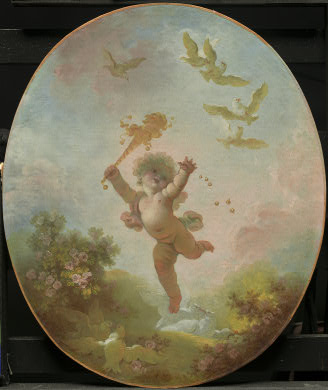 In case you needed reminding, today is Valentine’s Day. Originally dedicated to one or more early Christian martyrs, the festival was established in the 5th century. Valentine’s came to be associated with romantic love in the Middle Ages, in the circle of the English author Geoffrey Chaucer, when the tradition of courtly love (nobly and chivalrously expressing admiration) first flourished.

So today’s the day to celebrate loved ones. Hearts on everything have been running rampant in shops for weeks and restaurants will be jammed tonight, with couples table-to-table, gazing into each others’ eyes. Flowers are presented, candies are consumed and cards, cuddles and kisses exchanged. I can think of no artist at the NGA better-suited to the fuss and froth of Valentine’s Day than the French painter Jean-Honoré Fragonard (1732 – 1806). His work represents the final, magnificent flourish of the Rococo style in France. Rococo emerged in 1700 and dominated Europe during the 18th century, emphasizing elegance and decorative charm. Fragonard’s first show at the Salon had been of a history painting, but he rejected a potential career as an ‘academic’ artist in favor of making pretty, sensual paintings for parlors and boudoirs, not public display.

Love as Folly (c. 1773/1776) is the perfect picture if you’re into the lighter, sillier side of Valentine’s Day, showing Fragonard in full and frivolous flow. The little figure springing into the air with limbs outstretched is Love, all padded plump flesh and bouncing curls. There’s a delicate feel for color in the flush on the baby’s cheeks and the furled roses below. Look for the lightness of touch in the spread of the cotton clouds behind. As the title suggests, this is packed with things for Valentine’s fans to go gaga for. Love looks a lot like Cupid, son of Venus, who can make people fall in love with a shot of an arrow. The torch in his tiny fist is an emblem of burning desire. See the doves, painted in pairs, symbols of fidelity since they mate for life. And that smattering of roses down on the ground calls to mind the staggering fact that, in the US alone, 110 million are bought and delivered for this one day!

Now, if all of this is making you queasy, and you take a more cynical stance on Valentine’s Day, then let’s turn to an antidote: Love as Sentinel (c. 1773/76) is a pendant to the first picture. Here’s Cupid shushing us, finger held to his lips. His gold-tipped quiver lies on the ground, calling to mind the 34 million metric tons of waste that result from sales of gold jewelry in America in the two week period leading up to today. And what’s happening in the sky, looking unnaturally colored in parts? It could be the effects of pollution from the importation of all those roses from around the world. And as for Cupid’s pudgy tummy: was the $1,000 million spent on Valentine’s candies really so well spent?

At the height of Rococo, Fragonard’s pictures were fashionable, popular and everywhere, with even the king’s mistress commissioning works. But by the 1770s (when our two were made), French tastes were changing and a new style (Neoclassical) was coming in. So if you’re someone who eats up the all the sweetness, romance and love-y stuff, I’d say indulge in today to your heart’s content. But if, on the other hand, you avoid all the Valentine’s hype and pressure, then remember one thing: just like Rococo, today will end, and it’ll be business as usual from tomorrow. (Until next year, that is). 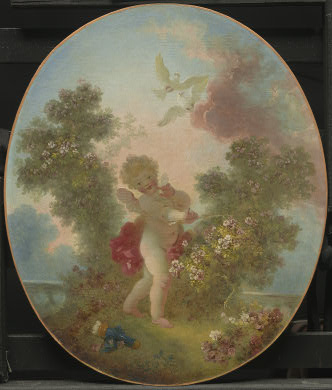 One thought on “The Look of Love”