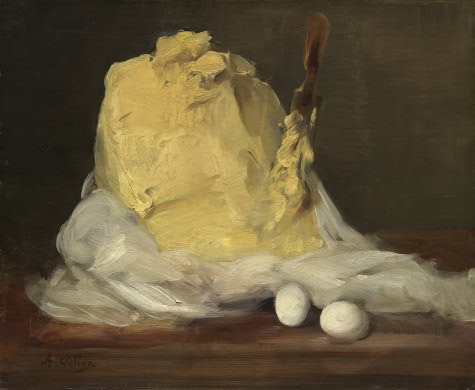 For more than 1,000 years, this day in the UK has been known as Shrove Tuesday. The word ‘shrove’ is the past tense of the (old) English verb ‘shrive’, meaning to obtain absolution for one’s sins through confession and penance. Shrovetide (the week leading up to today) is when Christians were expected to cleanse themselves in preparation for the 40-day season of fasting and prayer known as Lent (which begins tomorrow).

So Shrove Tuesday was traditionally about clearing out the soul and cleaning up the mind before a time of personal communion with God. It was also the time to empty out your larder, since church regulations tended to restrict the consumption of pleasure-giving foods during Lent. So all scraps of meat (‘collops’) were eaten up on ‘Collop Monday’ and butter, milk, eggs and sugar needed to be used up the next day. A pancake recipe was one of the best ways of using up all the goodies from your cupboard, making a fun final feast before the leaner Lenten days (hence today is often referred to as Pancake Day).

That feeling of looking forward to a fabulous feed, laced with butter and enriched with eggs is perfectly packaged in this picture, Mound of Butter (1875/1885) in the Small French Paintings section of the NGA. It’s by Antoine Vollon (1833 – 1900) a French realist painter, known as the Chardin of his day (we looked at Chardin on 10 Feb). Vollon was most accomplished as a painter of still-life scenes, in which he would depict objects stored in his studio such as fruit, flowers, tankards, copper cauldrons and bowls. He exhibited at the annual Salon shows in Paris but remains somewhat under the radar to this day.

This painting’s pared-down approach brings us close to the beauty of everyday things, whether we’re giving up butter for Lent or not. The objects are thrust up against the picture plane and the sense of depth is diminished. The mound of butter looms large, bigger than any I’ve seen before. The pyramidal pile of fat rises majestically and mountain-like from what looks like a linen cloth or paper casing. The golden paint so perfectly emulates the color of butter that the lips start to smack and and the taste-buds tingle.

What Vollon excels at is the actual handling of paint. Close up in the butter area, one sees the way the oil has been slathered on in thick slicks. The strokes are quick and sure, purposefully leaving tracks of paint that harden onto the canvas. Vollon used brushes for this effect, but also the brush handle, his palette knife and occasionally his hands. The result here is unlike anything I’ve seen before: it literally looks as if it’s been painting with butter.

For as long as people have observed Shrove Tuesday, it’s been a time for fun and festivity, ahead of the more somber period to come. This is the root of the carnival traditions that lots of countries observe in February. The word carnival, popularly translated as “goodbye meat” (from the Italian ‘carne’ – flesh, and ‘vale’ – farewell) also has an older derivation from the Latin ‘carnelevarium’ (meaning ‘solace – or lightening – of the flesh’). Now I don’t know about lightening the flesh – I’m pretty certain Vollon’s avalanche of butter would cause quite the opposite effect – but today’s a day for a blowout. So if you’re in the mood for some food, then here’s the best pancake recipe I’ve ever tried (it’s the melted butter that makes them so good).

Zest of an orange 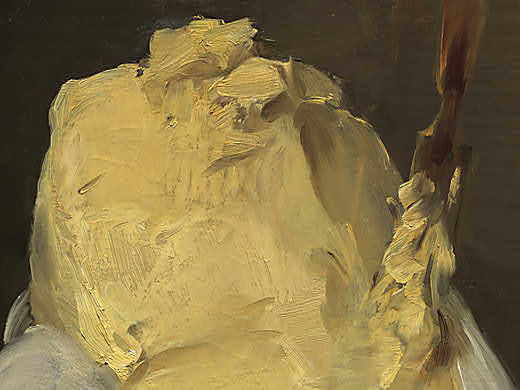 1. Sift the flour into a large mixing bowl. Add the sugar, orange zest and salt.

2. Whisk the milk, eggs and vanilla essence together in a separate bowl.

3. Add the wet ingredients to the dry ones, adding the melted butter last. Whisk to blend.

4. Pass the batter through a fine sieve and leave to stand for at least 30 minutes.

5. To cook, put a non-stick frying pan on a medium heat, wipe with a touch of oil.

6. Pour in just enough batter to thinly coat the bottom of the pan, cook 2 minutes per side. 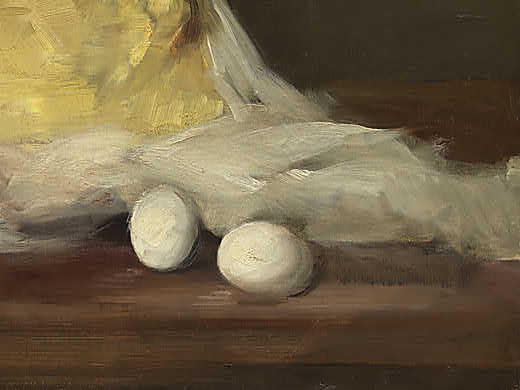 One thought on “Butter Be Good”