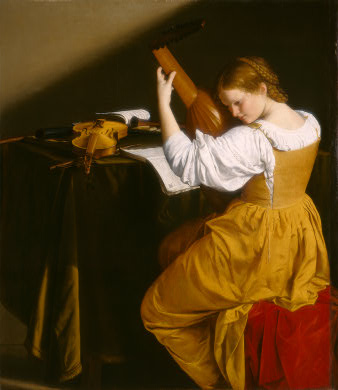 I was into American Idol long before I married an American and moved to his country. This global behemoth of an entertainment show is now rolling through its ninth season. For the uninitiated few, Idol is a reality television competition that finds new solo musical talent. It debuted in 2002 and has since become one of the most popular shows in the history of American TV. As well as the singing from boys and girls aged 16 – 28, a huge part of the show’s popularity stems from the panel of judges, which includes acerbic Brit music exec. Simon Cowell and the (new this season) talk-show host Ellen DeGeneres.

This time round, we’ve already seen the nation-wide auditions (episodes in this phase tend to show us the crazies and the crazy-goods, as well as a smattering of heart-tugging contestant stories). There’s also been Hollywood Week, in which all those given a “golden ticket” in the early rounds are whittled down to the top 24. Finally it’s time for the first of the live shows: tonight the 12 remaining girls will sing for the public vote.

If you’re into music, but not the hype and manipulation that comes with a large-scale production like American Idol, then you could do worse than pay a visit to the NGA. Among the gallery’s myriad artists depicting musical themes, Orazio Gentileschi (1563 – 1639) is in my top 12. His Lute Player (c. 1612 – 1620) takes as its subject moments of pre-show excitement. Gentileschi was born in Pisa and moved to Rome in his teens, where he was first mentioned as an artist in the late 1580s, decorating the Vatican library. It was not until around 1600, when he fell under the spell of Caravaggio, that he began to strike out as a painter. Michelangelo Merisi da Caravaggio (1571 – 1610) was also in Rome at the time and Gentileschi became one of the earliest and most gifted followers of his style (known as the “Caravaggisti”).

The emotional realism, evocative lighting and simplified composition in the Lute Player are all things that Gentileschi picked up from Caravaggio. There’s a placid sense of poise, even a delicate thrill of tension in the depiction of the preparation of an instrument for play. As the woman leans in, head bent and hands engaged, we too quiet down to concentrate. It’s unusual that she’s seen from the back, turned a full three-quarters away from us. This creates a special sense of introspection, as if we’re lucky to even be here. One thing Gentileschi delights in is detail and the rendering of textures. Just look at the sheeny belly of the lute, or the gloss of her hair. See the rich red velvet billowing over the chair and the fine white shirt cloth spilling forth from her bodice. The quality of light is also key, falling in from the right to make things glow: the resulting soft shading on her face and the objects lends a certain intimacy.

Gentileschi based this image on a painting by Caravaggio, also called The Lute Player from the 1590s (three versions of the work exist, the one shown here is in the Hermitage Museum in St Petersburg). What Gentileschi does even better than his mentor, for me, is tap the potential of things before they happen. As long as we look, we’re left in delicious anticipation of the sounds that the assortment of instruments and song sheets will produce. It’s a wonder that something so silent can resonate so well in our imaginations. That’s why Gentileschi’s my Art History Idol. 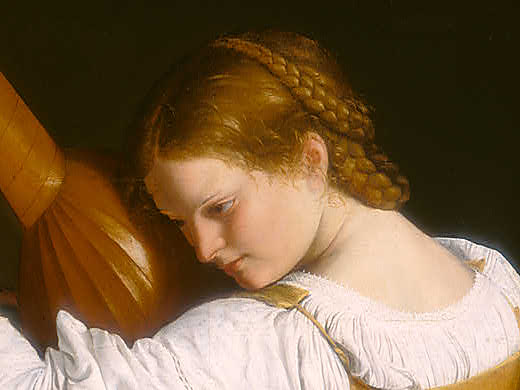 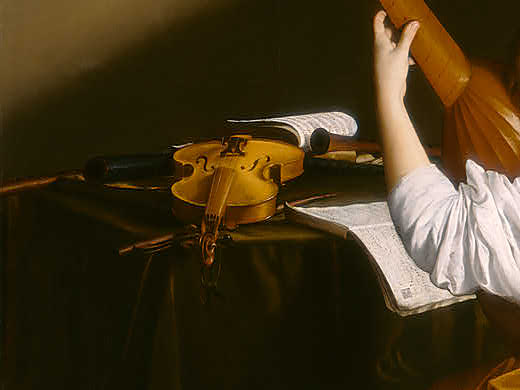 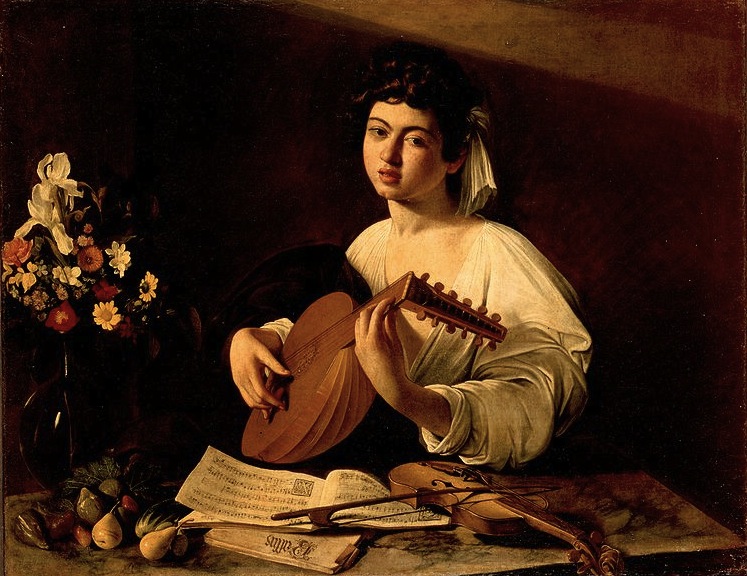 One thought on “Tuning In”