Brains are the brand new status symbol, as people predict that this decade will be all about IQ. After years of an extreme intellectual diet that had current affairs at one end and tacky celebrity gossip at the other, the middle ground of brain-nurturing stuff is back, giving us a chance to re-flex our flabby noodles.

Suddenly we’re seeing a feast of things to feed our intellectual curiosity. The School of Life is an alternative learning centre for adults set up in London in 2008. Its calendar of events includes talks and workshops geared to providing a place to think intelligently about life’s challenging questions. Also in Britain is Intelligence Squared, the country’s top debating forum, which stages discussions on a variety of topical issues between politicians, journalists and media people. The live events attract thousands, with millions more watching online. Then there’s TED, an American organization that invites specialist speakers (from neuroscientists to Hollywood directors) to give an 18 minute talk on any subject, which also clocks millions of views on the internet. And isn’t it interesting that one of the best-selling books at Christmas was Flip It, a self-help book that promises to sort your brain for clearer thought?

The Italian sculptor Pietro Magni (1817 – 1877) offers a 3D vision of our new intellectual zeal. Born in Milan, Magni studied at the city’s Academy of Fine Arts before moving to the workshop of a fellow sculptor. His marble figure The Reading Girl (model 1856, carved 1861) made his career, bringing acclaim and fame in both Europe and America. The work sticks to the artistic tradition of verismo (or “realism”), which was popular in Italian art in the middle years of the 19th century. There’s a lot of delicate carving that’s gone into making the different textures (cloth, skin, hair, paper, wood) come alive and look believable. One English critic who viewed the work in the 1862 International Exhibition in London wrote: “Magni’s Reading Girl, truthful … to the hem of the garment, to the turned leaf of the book, and the torn rushes from the bottom of the cottage chair.”

But this sculpture isn’t just about looking real: there are levels of intellectual and emotional complexity that make it rich with significance and resonant with meaning. The girl sits on a rough rush chair, on a simple tile floor, suggesting she’s of the poorer working-class. She’s homed in on and, judging by the tear streaking her left cheek, moved by her book. The words – legible in the first exhibited version of the sculpture – are lines by an Italian poet who championed freedom during the Italian uprisings of 1848. Our girl also has a portrait medallion around her neck, of the Italian patriot Giuseppe Garibaldi. So she’s learning about (and feeling support for) the imminent “Resurgence” in her country that will lead to its eventual unification.

Psychological research shows that an important part of a contented life is to spend some of your day thinking about ideas or purposes that are bigger than you are. That means finding things to cultivate and expand your mind, in meaningful, unpretentious ways. And it seems we’re spoiled for choice just now. But I want to return to The Reader just before I sign off because, we couldn’t help but notice that she’s wearing just a nightie, that has slipped off one shoulder to reveal a breast. Provocative and seductive, this must surely have enhanced the work’s appeal wherever it was shown. But hey, I guess she’s telling us that engaging your brain is sexy again. 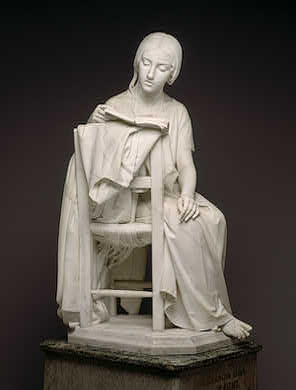