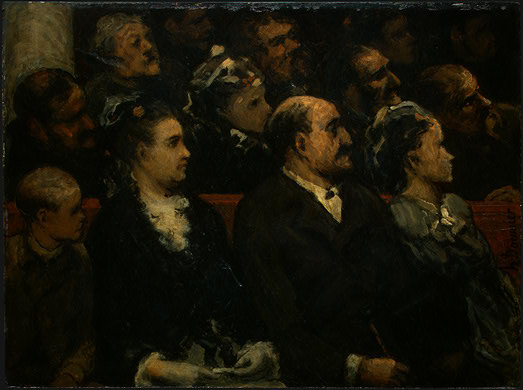 Tonight is the Oscars and the stage is set for the 82nd Academy Awards. Held at the Kodak Theater in LA, this is of course billed as the year’s largest, most lavish movie event. In the past, I’ve attempted to follow the awards from London, willing proceedings to get underway before I (inevitably) dropped off on the sofa. So I’m excited this year to see the ceremony in real American time for the first time, and plan to be there for the films, the fashion and everything in between.

French Theater (c. 1856) is chosen for its special audience atmosphere. It shows a theater crowd, but also brings to mind modern-day cinema, or perhaps viewers at a ceremony of sorts. It’s by a French artist called Honoré Daumier (1808 – 1879) whose career is one of the most unusual in 19th-century art. Born into a family of artists in Marseille, Daumier’s father moved the family to Paris in 1816 in pursuit of a literary career. When these plans fell through, the young Honoré had to find work fast. After a number of menial jobs, he learned lithography, aged 14: some time with a commercial printer then fine-tuned the techniques he needed. Lithography is a printing process on a flat piece of stone or a metal plate: the hard surface is etched with acid to form a design that selectively transfers ink to paper. From 1829 on, Daumier produced lithographic caricatures of his own and embarked on a 40-year career as a comic artist to the weekly press.

Daumier was better known in his lifetime for his satirical cartoons and caricatures than he ever was for his ‘proper’ art. And yet, as a painter, he was admired by fellow artists like Corot, Degas and Delacroix. Daumier’s choice of subject-matter mostly placed him in the Realist tradition, a mid-19th century French movement that emerged as a reaction against the outdated strictures of academic art. Realist works tended to be large-scale, showing rural peasants or the city working class, and focussed on an unidealized account of reality. While French Theater doesn’t strictly fall into the Realist category (it’s small and shows a more up-scale crowd), it does reveal the engaging honesty of Daumier’s eye and exactly how good he could be, despite never having had a proper art training. My delight is in the true-to-life details: spot the double chins, hair-growth patterns and noses of varying size.

What’s also brilliant here is the well-observed body language, brought to life with spontaneous brushwork that anticipates the expressive oil of the Impressionists. The spectators are all angled in their own way towards the stage. Shoulders are shifted, heads are turned and hands are held quietly in lap. There’s real spontaneity in the group’s zig-zag, forward-back of bodies as people lean to catch the show. Body language is one of the best ways for an artist to tell a story, and the gestures here pull us quickly into a theater environment. The darkened color palette (which still allows for a studied handling of light) adds to the mood. 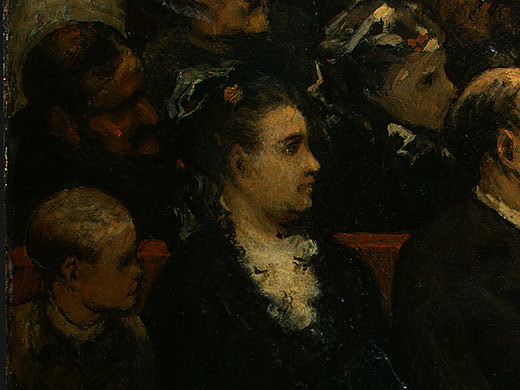 The sheer vastness of Daumier’s lithographic output and the unsurpassed brilliance of his printing style still to this day tend to overshadow his achievements as a painter. In a work like this though, Daumier’s day job, which called for a candid interpretation of real-life events, actually served to make the snapshot all-the-more gripping. I wonder how he’d picture all of us, glued to our screens once the Oscars get underway. Just make sure there aren’t any popcorn kernels stuck in your teeth, I’d say. 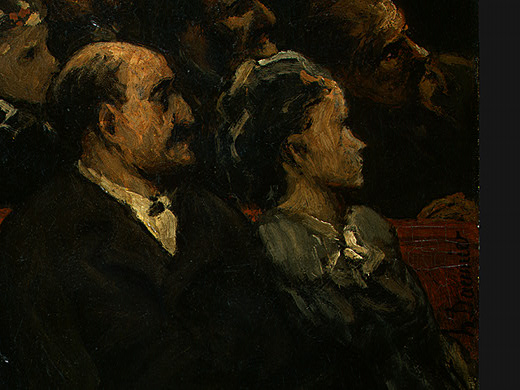