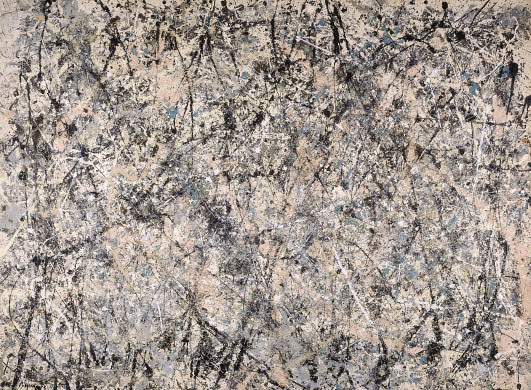 A week ago today, an 80 year-old lady named Ruth Kligman passed away. A painter and artists’ muse all her life, Kligman will forever be remembered in the history of art as the sole survivor of the 1956 car crash that killed Jackson Pollock, her lover at the time.

Kligman was 26 when she first met Pollock in 1956 (he was 44, estranged from his wife and losing his battle with alcoholism). Kligman recalled in her book Love Affair: A Memoir of Jackson Pollock, that he looked “tired out, sad … his body seemed as though it couldn’t stand up on its own.” Only a few months later Kligman was riding with Pollock when he, intoxicated, ran the car off the road and flipped it. The crash killed Edith Metzger (a friend of Kligman’s) and himself. Kligman was thrown clear of the car and seriously injured.

Kligman’s passing brings back Pollock’s own demise and sudden death, which have added a harsh mystique to his status over the years. Born in the rural west, Pollock (1912 – 1956) studied art in New York and became a leading Abstract Expressionist. It was in 1947  that he started making the drip paintings that made his name and revolutionized the way a painting was supposed to be made. Ditching the easel, Pollock tacked unprimed canvases to the floor in a barn at his East Hampton home. Using enamel house paints (oils weren’t fluid enough), he literally poured them from the can, or dripped them with sticks or hardened brushes.

Pollock had been painting in this drip style for three years when he made Number 1, 1950 (Lavender Mist). It represents a high point of what came to be called his Action Painting. It’s huge (221 x 300 cm) and shows how Pollock overturned the idea of composition. In making this, he’d move around and over the canvas, flicking his wrist and arm, shaking his whole body in free gesture. Every inch of the canvas becomes a record of a physical encounter. Long, curved lines, tick-like flicks and bleeding splats lead the eye. Some areas suggest chaos and chance while others indicate order and design. This “all-over” style – where no part of the picture is more significant that any other – creates a mass of restless, eddying energy that engulfs the spectator. Here, it looks like Pollock applied the black paint first, a sticking-out skeleton over which he added subsequent shades. The intricately woven webs of white, grey and peach evoke great banks of lavender wafting in the sun. 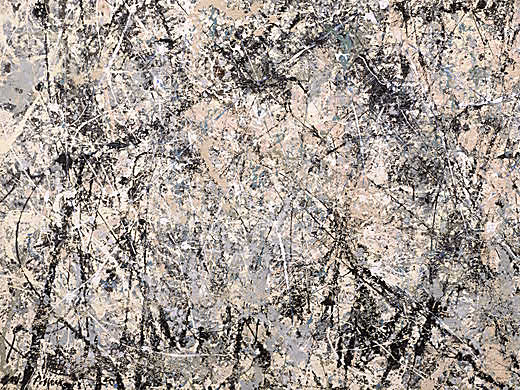 Pollock wanted to find a technique for his age and was taken by the idea of automatism – that is, abandoning conscious control of a picture. He said: “when I am in my painting, I am not aware of what I am doing.” It seems that this free and unrestrained aspect of his art came to be reflected in his wild and reckless life (excessive drinking, high-speed driving). In the short time Pollock worked on Action Paintings (he abruptly abandoned the drip style in 1951), he diverted the path of painting forever. And yet despite his fame (he was dubbed Jack the Dripper by Time magazine, and Life magazine suggested he was “the greatest living painter in the United States”), he seems never to have found peace or happiness for himself. At least it seems that his young lover Ruth Kligman would have been able to empathize: she always maintained that she knew better than most how truly hard the life of an artist is. 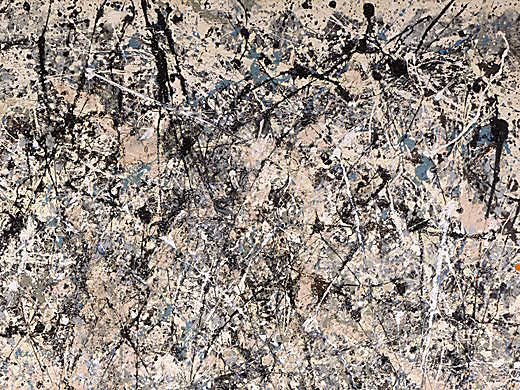 One thought on “Active Expression”