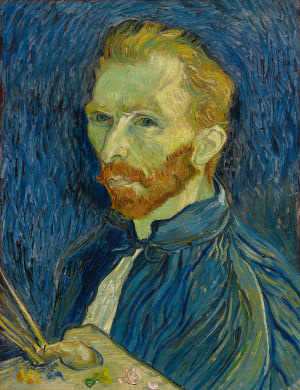 Last weekend, David Beckham unveiled his latest tattoo at the end of an AC Milan match. The new etching (on his left bicep) is based on a painting by the French artist Bouguereau (1825 – 1905) and shows Cupid carrying his wife Psyche up to heaven. It’s thought Beckham chose the picture as a romantic tribute to his wife Victoria. 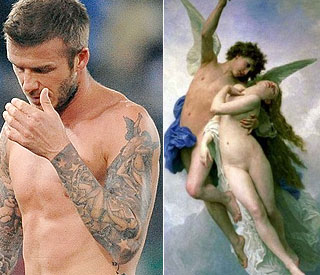 It seems that great art by old masters is providing lots of inspiration for tattoos these days. In a quick search I found Picasso’s Peace Dove on an ankle, Michelangelo’s Creation of Adam across shoulder blades and a lot of Dali in all sorts of anatomical nooks and crannies. One of the most-referenced artists in body art seems to be van Gogh: I found Sunflowers and Starry Nights galore, made large and lavish in technicolor. There’s even a book on the subject: Van Gogh Art Tattoos details four of van Gogh’s most memorable works, adapted as tattoos. And would you believe it? One of those is a painting at the NGA.

The life of Vincent van Gogh (1853 – 1890) was one of restlessness and unease. He started out in his uncle’s art dealership in Holland before traveling to England aged 20, where he fell in love with a girl who was already engaged to be married. This early experience of unrequited love is thought to be behind the fanaticism that led to his mental breakdown later in life. After a time as a missionary in Belgium, van Gogh moved to Paris in 1886 (aged 33) where his brother Theo (an art dealer) introduced him to the things that proved influential (Impressionism, Japanese art and color).

Having arrived at his artistic vocation by a slow and sticky route, van Gogh dedicated himself whole-sale to painting. In 1888 he went to Arles and spent the last two years of his life in fruitful and fervent production. The NGA’s Self-Portrait (1889) is one of the very last pictures he made, a few weeks after a severe breakdown inside the asylum he’d entered in 1889. As one of 36 self-portraits made in his painting career, it stresses how focussed van Gogh was on the probing practice of self-imaging. 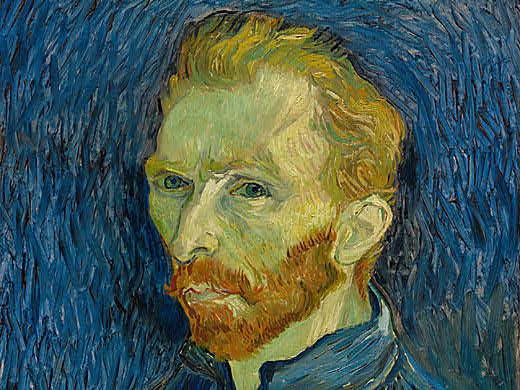 This picture is overpowering in its purity and realism. The flesh is tinged yellow and green, encircled by the rough red beard and tufts of hair. The mouth is unhappy, the eyes are guarded and the brow is creased into a firm furrow. The color is alarming and shows van Gogh’s fascination with complimentary shades on the canvas (he owned a box of colored yarns to braid together and experiment with certain combinations). Here the virulent orange and insistent blue spar and jar on the surface: the color is a tool to explore emotion, rather than an aspect of realism. 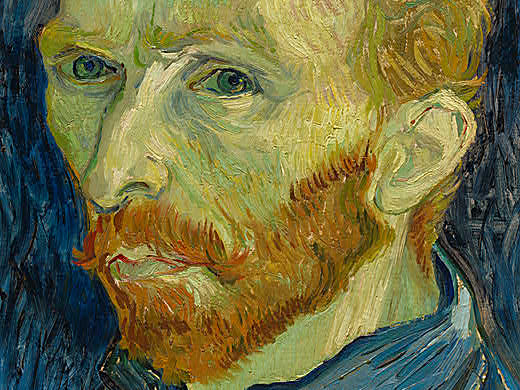 The poignancy here is totally arresting and for me it centers on a terrifying tussle. See how the blue smock has started to merge into the background? It’s as if that whorl of bludgeoning blue background strokes is threatening to overrun the artist’s image and identity. With palette and brushes hoisted shield-like, it’s a haunting stand against annihilation. This kind of work is a search for truth and meaning for van Gogh: in one letter to his brother he admitted as much: “… it is difficult to know yourself; but it isn’t easy to paint yourself either.”

It seems to me that for some people with tattoos, the body becomes a kind of record, with past loves, personal achievements and so on. But for van Gogh, who never used his skin as a canvas as far as I know, all the evidence of his life’s dizzying ups and downs is plastered onto the canvasses he painted. 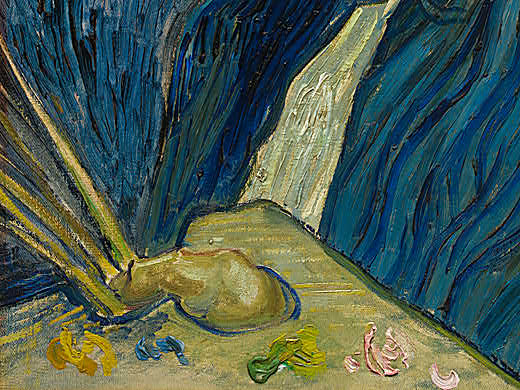 One thought on “Canvas of Life”