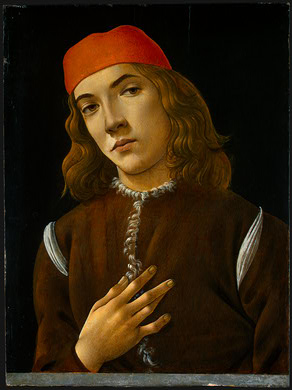 Last Sunday, Sandra Bullock won the Best Actress Oscar for her role in The Blind Side, a film based on the true story of how football star Michael Oher was taken in by a family that helped him realize his potential. I’m pleased Bullock won and I liked her acceptance speech, which was humorous and moving, and celebrated uncelebrated mums everywhere.

And the speech stressed something else. When Bullock thanked people who’d supported her “when it wasn’t fashionable”, she plainly acknowledged that her career has had both ups and downs. Typically, the more terrible stuff happens early on and one’s work gets better with time and maturation. But for Bullock (who picked up her Worst Actress Golden Raspberry for her role in All About Steve the night before the Oscars), the highs and lows couldn’t have come closer together.

One artist at the NGA who’d have been able to empathize is the Florentine painter Sandro Botticelli (1445 – 1510). At the peak of his powers, Botticelli was successful and sought-after, and this Portrait of a Youth (c. 1482 – 1485) has all the hallmarks of his heyday. The sitter may have been a member of the Medici family, who ruled Florence and were prolific patrons of the arts. This sort of secular portrait was popular at the time, chiming nicely with the cultural movement of humanism, which honored man’s reason and centrality, rather than God’s supremacy alone. As a Medici artist, Botticelli was exposed to a humanist education, which included classical texts and the liberal arts. 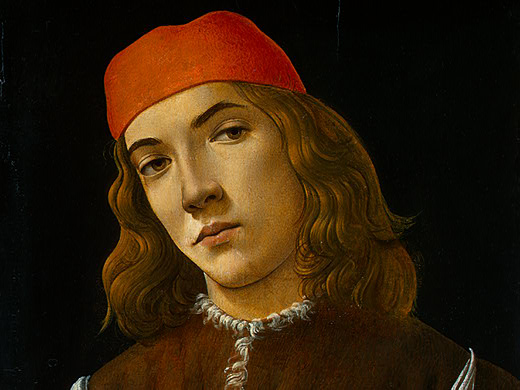 Here we see Botticelli’s graceful, linear style. Florentine artists were known for their draughtsmanship and precise drawing practice, and Botticelli uses contour in a very emphatic, elegant way. See the decorative waves of the chestnut hair, lined and luscious against the face, or the ornamental curled trim, running down the torso and around the neck.

In a bust-length picture, expression comes first from the face and next from the hands. And what a pulsing personality comes across here! Never mind the shaping and shading of the nose, the pouting of lips, and the etched-in eyebrows. Let’s focus on the fantastic idea to cock the head, while keeping those big baby browns locked on the onlooker. Instantly, for me, there’s a sense of a challenging, believable character. The hand’s not idle either and nimbly conveys Botticelli’s sophisticated understanding of anatomy. But even here, anatomical accuracy gives way to an impulsive desire to create pattern and beauty. Now, I’m pretty sure that this hand gesture must have meant something specific at the time, but even for us in the dark without a definitive interpretation, it’s still an attractive thing to see. 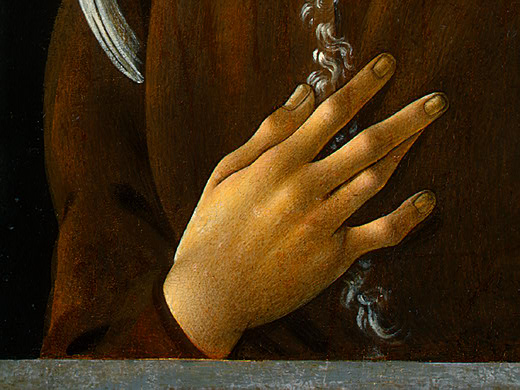 Not too long after this was made, Florence fell into political crisis. The Medici were expelled in 1492 and there followed four years of extremist rule under a dominican preacher called Savonarola, who forced religious observance in all aspects of life. Most likely in response to this, Botticelli devoted his later years to painting religious themes. Since they were all rather clumsy and rather obscure, these pictures were derided and he fell out of favour. He spent his last decades in obscurity, considered passé compared to a new generation of artists. It was only much later that Botticelli was rediscovered, by a group of painters called the Pre-Raphaelites in the mid-19th century, who valued his design and decorative charm.

Now, of course, Botticelli is one of our best-loved painters, despite the marked peaks and pitfalls of his career. I suppose we can learn from both Sandro and Sandra, that flops and failures are all part of the journey and our best performance could be just around the corner. 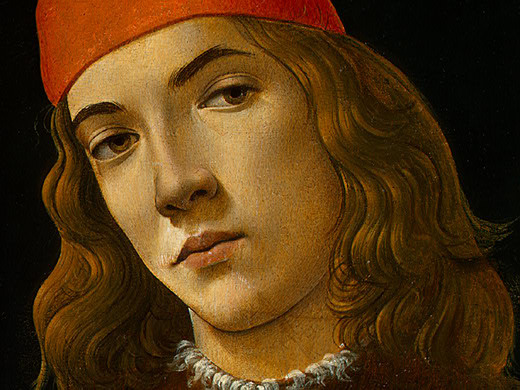