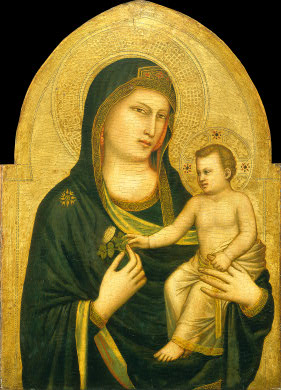 Yesterday was Mothering Sunday in the UK, a centuries-old feast when priests would go to the Mother Church of their district, and parishioners would visit the church of their baptism. From the 16th century, job rules were relaxed on the day, so that boys and girls working “in service” could take time off to visit mum, half-way through their year’s contract. Employers would pack young staff off with a simnel cake (a rich fruit cake with layers of marzipan) to bring home, in hopes that the gesture would bring a return of blessings.

In honor of all traditions that commemorate mums, we’re looking at an old picture in the NGA today. The medieval painter Giotto di Bondone (1267 – 1337) is credited with releasing Italian painting from the Byzantine style, and produced moving and memorable images of mothers. Byzantine art flourished from 330 to 1453 and used lots of gold-leaf, stylized faces, rigid poses, stiff drapery and little sense of space or volume. It was Giotto, with works like this Madonna and Child (1320 – 1330), who ushered in a new age of naturalism.

This picture was originally the central part of an altarpiece made up of five panels. Painted late in Giotto’s career, it shows the artistic leaps and bounds he made. The use of gold-leaf on the background is traditional (and typical for an altarpiece like this), symbolizing heaven. There’s gold-tooling too (on the haloes and around the edges), where the wood has been “punched” with a point to indent dotted patterns in the surface. But despite the shimmer, the other colors retain their warmth and vibrancy: soft flesh tones, slivers of hot red here and there, the deep blue mantle and the fresh green at its hem.

But the true revelation here is realism. Giotto makes this flat surface look 3D with a new approach to form. The bodies of Mary and Jesus aren’t flimsy cardboard cut-outs: instead they carry convincing corporeal weight. It’s the soft and subtle shading that’s key to carving out the impression of mass and volume. The folds of Mary’s mantle flow from dark (in the crook of her elbow, in the area of her armpit) to light (at the point of her shoulder, down her bicep) to suggest the real, physical being beneath. The baby too is rounded through tonal gradations that shape his chest and the chub at his wrists. 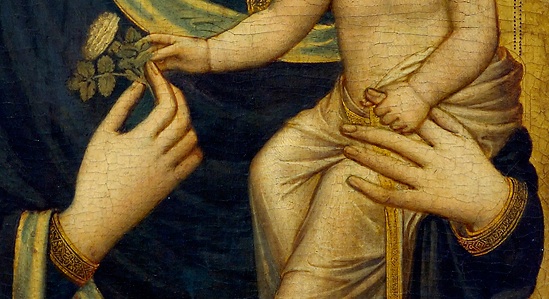 Giotto observed the world around him to achieve his natural look, and put his skills in pursuit of one ultimate aim: to bring new human drama and meaning to religious stories. He diminished the divide between “them” and “us” by making holy bodies look like ours and bringing us up close to his subjects. See how Mary stands almost as if in our company here (no distancing thrones or the like in sight). She’s cropped at the waist and gazes into our eyes. Gestures too are entirely relatable: she holds a rose (symbol of her purity), and baby’s decided it looks interesting, reaching to grab it with his right hand. With his other he’s got a hold of mum’s index finger, in a move we all recognize as typical of infants.

Giotto’s big steps towards realism played a fundamental role in the development of Western painting, which is why writers on the Renaissance always begin with him. Due to his focus on real experience, a picture like this becomes universal, revealing the relatable essence of human motherhood. And it seems pretty clear from this glowing image that he held the role in sparkling regard. 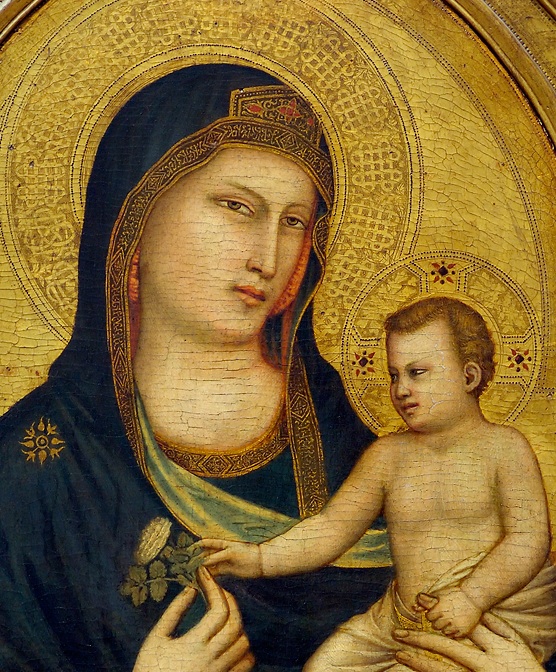 One thought on “Keeping It Real”