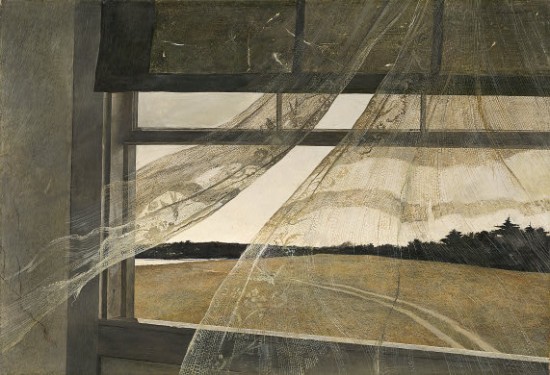 Do you have a favorite poem? One that left a lasting imprint when you first heard it, read it or said it aloud? For me it’s The Listeners by Walter de la Mare (1873 – 1956), English poet, short story writer and novelist. I first learned the poem as a child (our class recited it at a school assembly), and I don’t think it’s left me ever since. Reading it never fails to trail goosebumps along my arms, as the rhymes and reasons of the lines take hold. Here it is:

‘Is there anybody there?’ said the Traveller,

Knocking on the moonlit door;

And his horse in the silence champed the grasses

Of the forest’s ferny floor:

And a bird flew up out of the turret,

Above the Traveller’s head:

And he smote upon the door again a second time;

‘Is there anybody there?’ he said.

But no one descended to the Traveller;

No head from the leaf-fringed sill

Leaned over and looked into his grey eyes,

Where he stood perplexed and still.

But only a host of phantom listeners

That dwelt in the lone house then

Stood listening in the quiet of the moonlight

To that voice from the world of men:

Stood thronging the faint moonbeams on the dark stair,

That goes down to the empty hall,

Hearkening in an air stirred and shaken

By the lonely Traveller’s call.

And he felt in his heart their strangeness,

Their stillness answering his cry,

While his horse moved, cropping the dark turf,

‘Neath the starred and leafy sky;

For he suddenly smote on the door, even

Louder, and lifted his head:–

‘Tell them I came, and no one answered,

That I kept my word,’ he said.

Never the least stir made the listeners,

Though every word he spake

Fell echoing through the shadowiness of the still house

From the one man left awake:

Ay, they heard his foot upon the stirrup,

And the sound of iron on stone,

And how the silence surged softly backward,

When the plunging hoofs were gone.

It was this poem that plunged into my mind when I first saw Wind from the Sea (1947) at the NGA. It’s by Andrew Wyeth (1917 – 2009), one of this country’s best-loved artists. He received the National Medal of Arts in 2007 and his painting Christina’s World (1948) at MOMA, New York is one of the most iconic images of 20th-century America. Wyeth made his name with rural landscapes, portraits, and interior still-life scenes all done in his signature sharp-edged style. This picture is one of his earliest of a window: on a hot summer’s day he’d opened a seldom-used window in the attic of his neighbor’s house in Maine. 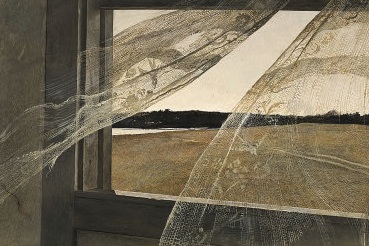 Somehow, this scene sends shivers down my spine, and I’ve tried to decide why exactly this is. Breaths of wind make the filmy, tattered curtains billow off the wood of the windowsill. The fine, white fabric reveals the painstaking, precise way that Wyeth worked. He used tempera paint (in which pigment is mixed with yolk, then thinned with water), which demanded slow application: here each thread is spun individually off his brush. The palette is pared down to grey, beige, white and black, though the scene outside is brighter than within.

For me, there are two things that make this eery. First is that fact that, though there are no figures in the tree-lined view, their presence is strongly felt (see the tire tracks trundling towards the sea). Second is the unique vantage point we’re given: it’s an up-close shot, with the tightly-cropped window frame hitting the edges of the painting, making it look like we’re actually looking out through this window.

Wind from the Sea is one of the NGA’s recent acquisitions and an emotive example of Wyeth’s haunting landscapes and pin-sharp style. For me, there’s either sackfuls of sorrow here, or an aching loneliness or chilling thoughts on the frailty of life. Whatever the meaning of this may be, for me once seen, rather like The Listeners, it’s impossible to get Wyeth out of my head. 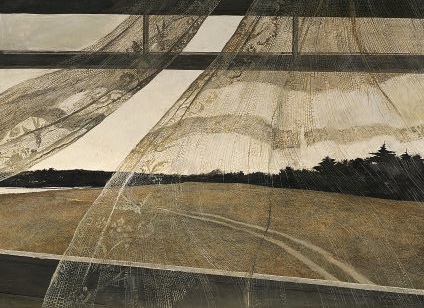 One thought on “Is There Anybody There?”