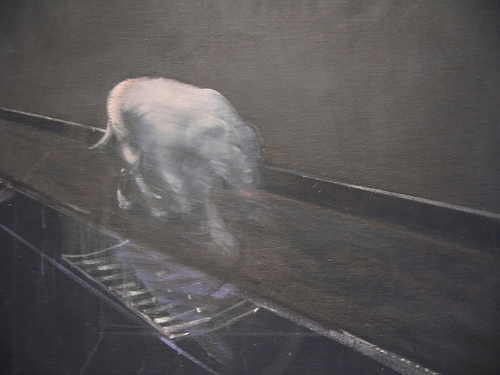 Today is named Saint Patrick’s Day, after one of Ireland’s best-loved saints. What began as a purely Christian holiday became an official feast day in the 1600s and is now a more secular celebration of Irish culture. Outside the Emerald Isle, St Patrick’s day is feted all over the world, wherever there are large numbers of Irish immigrants and descendants.

Born in 387 in Roman Britain, Patrick was kidnapped by Irish raiders at 16, and taken to Ireland to be a slave. While in captivity God told him in a dream to flee to the coast, to board a ship and return to Britain. Once home, Patrick became a priest. Later in life, he felt called back to Ireland, and dedicated himself to converting the rich and the poor (legend has it that he’d use the three-leaved shamrock to explain the Holy Trinity). From the time of his death, Patrick has endured as the principal champion of Irish Christianity and is held in esteem by the Irish Church.

In honor of Ireland we’re looking at Francis Bacon (1909 – 1992). Bacon was born in Dublin you see, at 63 Lower Baggott Street, to an English-born mother and an Australian-born father. He spent his earliest years in the city, before moving to England and later settling in London as an adult. Bacon became the most celebrated British painter of the 20th century, producing dramatic paintings of figures, which he distorted to express isolation, brutality and terror. He first gained notoriety in 1945 with Three Studies for Figures at the Base of a Crucifixion, a triptych depicting horrific half-animal, half-human creatures.

Study for a Running Dog (c. 1954) reveals a central aspect of Bacon’s practice, which was to base most of his paintings on photographs (photos served as a start-point for creativity).  Here it’s Bacon’s technique that rivets: it’s oil on canvas and he’s skilled in the medium. The colours are stark and sparse, so that a slight deviance from the monochromatic palette creates a stop and stir: a dash of mauve! a dot of pink! It’s captivating, how Bacon has smeared and smudged the paint in parts, so the form of the dog becomes blurred. See the astounding effect of movement this creates (can you see which part of the animal is more active?). Bacon was fascinated by Eadweard Muybridge (the 19th-century English photographer) who used multiple cameras to capture motion, and pioneered the zoopraxiscope, a device for projecting motion pictures that pre-dated the flexible perforated film strip. I think Bacon has Muybridge’s sequenced images in mind here.

The mussing of paint also transports the animal to a liminal zone between earthly and ghostly, to a point where it’s recognizable but distinctly ‘different’. Elsewhere, the paint application is sharper: see the shooting straight lines that cut across the canvas, marking in a gutter, a pavement, a road. The diagonal cast of these lines adds a feel of speed: they seem to glint as the dog rushes by. Unlike Bacon’s human figures and portraits – many of which are trapped in geometric or cage-like constructions – this animal retains a sense of instinct and freedom. It’s affirmation in the face of the overall gloom.

What’s amazing about Bacon is his alternative vision: what running dog did you ever see that looked like this? His work reveals a rare and fervid imagination that’s surely worth a toast tonight as the Irish and Irish at heart celebrate all aspects of the country’s culture. 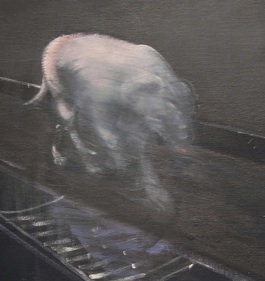