A week or so ago the UK Prime Minister Gordon Brown was left reeling following accusations he’s a bully who likes to ‘lose it’ with his colleagues. Downing Street hit back, saying he’s a serious man under serious pressure.

The spatting got people chatting: is it ever OK to lose your temper in the office? Some say any anger in a workplace is bad, culling the confidence and creativity required among co-workers. Others believe the odd rant or kick of a Coke can is vapid venting. Uncouth as it may be, it’s not the sustained, personal aggression associated with bullying. Brown’s in a top, tough, tense job: he’s got to save the economy, manage two wars and deal with an impending election. His was never going to be a stress-free environment, and I can only imagine that the people who signed up to work with him knew well what they were getting into.

Edouard Manet (1832 – 1883) was a man tested by a tough environment, and might have  lashed out as a result. Manet was anxious about the kind of artist he wanted to be. He had a traditional training under an academic painter, and made careful study of Old Masters in the Louvre. The trouble was, he was just as taken by the innovations of Japanese prints and his friend Charles Baudelaire’s urgings to paint modern life.

Manet aimed for a modern approach, but still believed real success could only come at the Salon. In 1864 things came to a head, when his Incident in a Bullfight was ripped apart by harsh and horrid criticism. That’s when Manet ‘lost it’ and slashed the painting clean in two! Out of that violent act came two smaller works: The Bullfight (now in The Frick Collection, New York) appeared in the upper right of the original composition and the NGA’s Dead Toreador (1864) made up the lower left. 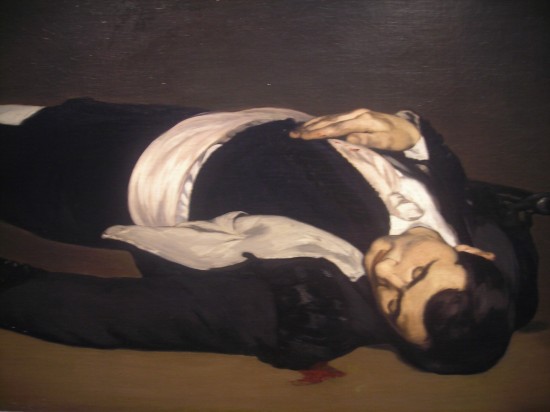 As unusual as this may seem, the critic and novelist Emile Zola (also a friend of the artist), described Manet’s unfettered approach: “… in beginning a picture he could never say how that picture would come out.” It seems Manet was happy to scrape away, re-paint, re-work, re-group and what happened was that this fallen matador evolved into an incredible icon of violent, visceral death. Manet changed the background, taking green to paint out the earlier sand, gate and bull. Out of the dusk the dead man looms large, lying on a dynamic diagonal line. The figure is dramatically foreshortened, shown at an angle to the picture plane by means of perspective to create the impression he’s jutting out. Manet’s choice of a Spanish subject can be traced to his love of the 17th-century painter Vélazquez, as can his lush tonal contrasts. See how he sets bright whites by pitch blacks, stark and stunning juxtapositions that escalate the drama.

Throughout his career Manet longed for official recognition, but ultimately stuck to his more modern impulses, saying “one must be of one’s time and paint what one sees.” Even though he was often mocked in official circles, his moves towards modernism made him a figurehead for future painters. So what if he lost it, now and again? Can we really blame him, given his testing circumstances? I suppose it’s OK for a painter or politician to ‘lose it’ (if things get heated and they’re shown a red rag), just as long as the tantrums and tirades don’t get turned on innocent bystanders. On the other hand, if you’re a matador, I’d say it’s never advisable to lose it, because then, as we see here, your goose is truly cooked. 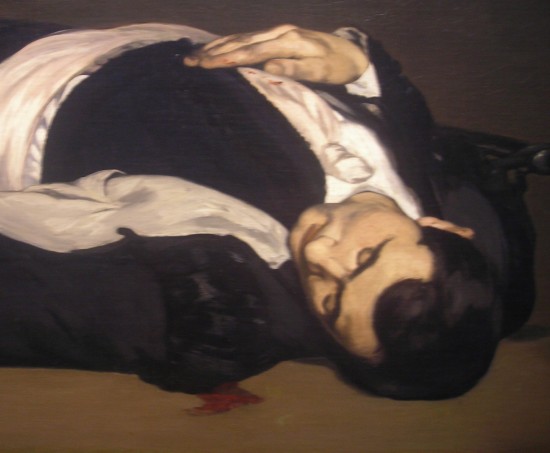