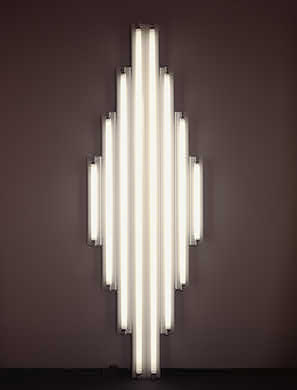 The spring equinox takes place today in the northern hemisphere. The word equinox comes from the Latin for “equal night” and refers to the fact that, twice a year, the sun shines directly on the equator, making the length of day and night equal in all parts of the world. For northerners, vernal and autumnal equinoxes fall around March 20/21 and September 22/23 respectively and always occur at a specific time (today’s is at 13:32 in Washington).

People have recognized the spring equinox for thousands of years (long before the astronomical intricacies were understood, I imagine). Early peoples celebrated for the basic reason that their food supplies would soon be restored. The date is significant in Christianity because Easter always falls on the first Sunday after the first full moon after the spring equinox. It is also probably no coincidence that early Egyptians built the Great Sphinx so that it points directly toward the rising sun on the day of the spring equinox.

So today marks the official shift of the seasons. People south of the equator will gear up for fall, while anyone who lives north of it can start to expect warmer weather and a lot more light. Who better to celebrate the lightening of our lives than the American artist Dan Flavin? After starting his career as an abstract painter, Flavin (1933 – 1996) moved on to make more object-based wall pieces. In the early 60s he began attaching light bulbs and tubes to monochromatic hardboard boxes. It was in 1963 that he had his seminal idea of taking a solitary fluorescent tube and attaching it diagonally to a studio wall: from that moment on, fluorescent light became Flavin’s exclusive artistic medium. 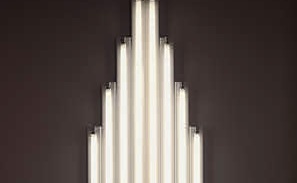 The NGA’s “monument” for V. Tatlin (1968) shows what an elegant solution Flavin found for the artistic problems of his time. On one hand, it syncs with Minimalism’s taste for simple form: the object is mass-produced, industrial, fitted to a wall, with an undisguised power supply. On the other, it deviates from Minimalism’s deliberate lack of expressive content in that pulsating light is highly atmospheric. It also calls attention to the gallery’s space and role by filling it with light.

Flavin admired the revolutionary ideas and plastic innovations of Russian Constructivism, an art movement that originated in Russia around 1914. It proposed and pioneered abstraction and the use of industrial materials such as glass and standardized metal parts and was intended to meet social needs. The name and approximate shape of the NGA’s work (indeed of an extensive series of Flavin’s works, some of which are shown below), derives from an icon of the Constructivist oeuvre: Vladimir Tatlin’s model for a proposed Monument to the Third International (1919 – 21). Though never built, the model toured the country as a symbol of Soviet aspiration. The vast structure would have been twice the height of the Empire State Building and would have housed the headquarters of international communism, the Comintern. 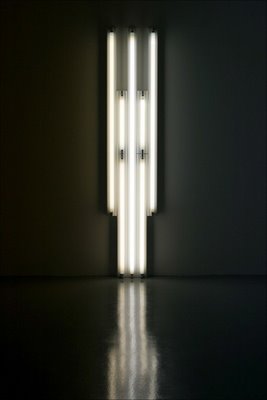 Looking at this light sculpture in a gallery is an interesting experience. It’s a small intervention that totally transforms the space it’s in. As the light diffuses, it’s clear that the boundaries of the work are not the object itself, but rather the architecture it’s contained in. It’s such a subtle way to make us pay attention to the context of the art. With his light tubes, Flavin can manipulate a building, making wall seams dissolve, ceilings disappear and rooms appear larger or smaller. He said: “One might not think of light as a matter of fact, but I do. And it is … as plain and open and direct an art as you will ever find.”