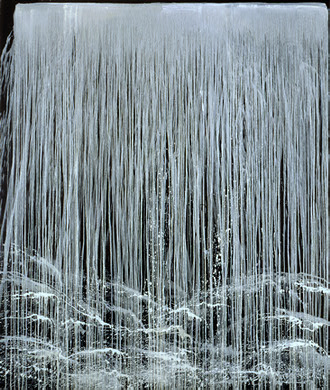 Today is International World Water Day. It was in 1992 that a day dedicated to freshwater issues was recommended at the United Nations Conference on Environment and Development (UNCED). The United Nations General Assembly responded by designating 22 March 1993 the first World Water Day. It’s an event created to focus attention on the importance of freshwater and the sustainable management of its resources. Each year, World Water Day highlights a topical theme. Last year it was “Shared Water – Shared Opportunities”, which talked about trans-boundary waters and the fact that countries can create co-operation, trust and respect (as well as economic growth) by managing mutual waters together. Other years have spot-lighted sanitation, scarcity and the ways water plays into culture. This year’s World Water Day foregrounds water quality.

Today, the American painter and printmaker Pat Steir (born 1940) helps to plummet us headlong into the drumming theme of water. Born in Newark, New Jersey and now based in New York City, Steir wanted to become an artist from an early age. She studied graphic art in New York and painting and comparative literature at Boston University before working as a book cover designer and an art director in publishing during the 1960s. Steir persisted with her painting and printmaking throughout this time and started exhibiting in solo shows in the 1970s. She is now at the forefront of American painting.

For me, Steir’s Curtain Waterfall (1991) hanging in the East Building at the NGA sees her at her breath-taking best. She became preoccupied with this subject and its execution in the late 80s, and I have to say I can easily imagine having this subject soak you up. What Steir produces is a monumental (352 x 296 cm), lyrical and dramatic explosion off the wall. 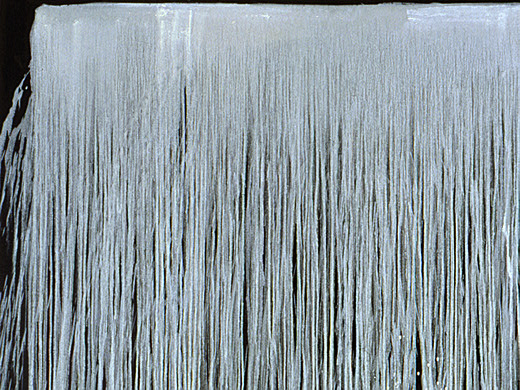 How does she do it is the obvious question. Steir’s dripping paint makes me think of Pollock, who pioneered this sort of approach in the 1940s. But it’s clear that Steir works in a different way, that she’s come up with her own style that stands alone. Here she causes cascades of light-colored paint to run rivulets down a darkened canvas. She’s set it up vertically, loaded her brush and dragged it across the top in a swathe. She lets the liquid drips run freely and easily down, where they’re met near the base by back and forth flicks and splatters, that clatter across from left to right. With the colors kept simple, we get to concentrate on the pull and pitter-patter of the paint on this sensual, highly-articulated surface. I like the way Steir harnesses gravity and chance effects to evoke natural phenomena. 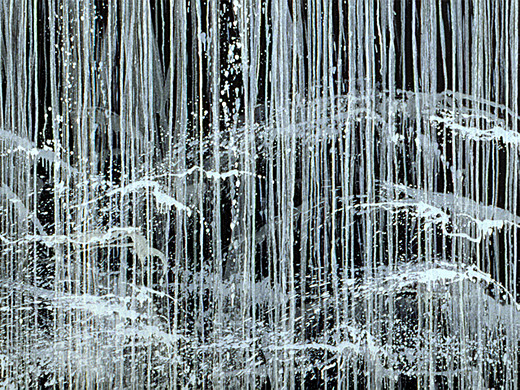 The waterfall of the painting’s title appears at close range, a dense, impassable wall of liquid, looming in darkness. Are we outside looking in or inside looking out? This reversal effect is fluid and fabulous. And moving beyond the label and look of this waterfall, Steir invests the work with conceptual richness. Here it’s as if she’s seeking to reconcile a series of dichotomies: complexity and simplicity, dynamism and sensitivity, discipline and chaos.

World Water Day raises awareness about sustaining healthy ecosystems and human well-being through addressing the increasing water quality challenges in water management. It encourages governments, organizations, communities and individuals around the world to engage in addressing the issues of water. Steir’s painted waterfall certainly sets the power and privilege of water center-stage. This is a thunderous message with tidal momentum. 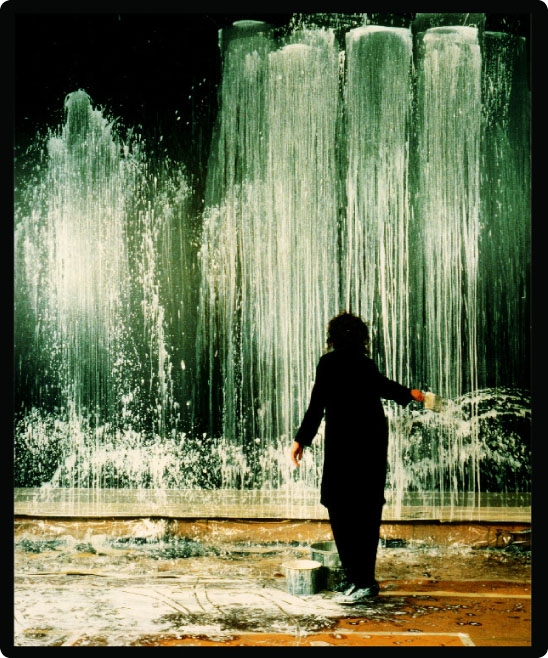