The Netherlandish painter Jan van Eyck (c. 1390 – 1441) was one of the best and most important artists of the Northern Renaissance, and his Annunciation at the National Gallery of Art leaves no question in the mind as to why. It shows the moment of the annunciation (from the Latin annuntiare, to announce) as described in the Bible in the Gospel of Luke: the angel Gabriel delivers a message to Mary that she’ll conceive a son, the Son of God.

Today is the Feast of the Annunciation, commemorating Christ’s miraculous incarnation nine months before the Nativity at Christmas. The annunciation was a central topic in Christian art during the Middle Ages and the Renaissance, physicalizing this most ungraspable of events. Van Eyck’s version (1434 – 36) was probably once the left wing of a triptych (a three-paneled piece). The picture spells out in golden script the words spoken at the meeting: Gabriel’s greeting (“Hail Mary, full of grace, the Lord is with you”) provokes Mary’s response of humble faith (“I am the handmaid of the Lord; let it be done to me according to your word”).

But it’s more than words that are written here: van Eyck’s skills are clearly legible on the canvas. He was an artist of rigorous observation, a “what you see is what you paint” kind of guy. He was especially sensitive to the fall of light, so that his physical forms (even that of the archangel) become laden with weight and invested with volume. See the shading that renders the faces round and the way he describes folds of cloth, delineating precisely where Mary’s mantle and Gabriel’s cape turn away from the light. 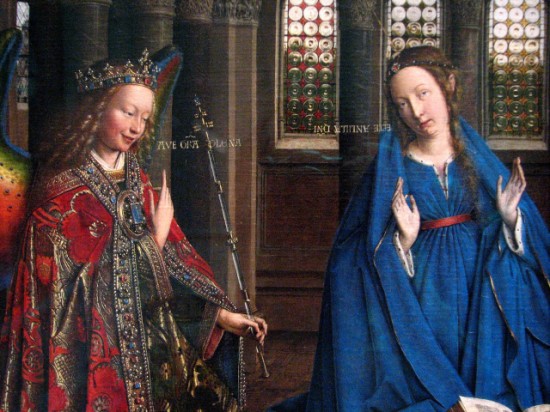 The facial features are also remarkable. Van Eyck was a gifted portraitist, with a nit-picking eye that he brings to bear here. I adore Gabriel’s rounded, apple-red cheeks and the way Mary’s tucked-in (dimpled?) chin ripples her neck. The fact these faces are 3/4 view (rather than profile) gives us a chance to read the expressions. This lends human freshness to a scene like this, since we can relate to Gabriel’s joy burst and Mary’s consternation.

In the 16th century the artist-biographer Vasari suggested that van Eyck had invented oil painting (mixing pigments with oil as opposed to egg yolk). This is now discredited, but van Eyck did perfect the technique of glazing (building up layers of transparent paint). It is this technique that helped him create the deep, rich colors seen here, as well as the super minute details. It’s astounding, how van Eyck could distinguish between textures from hard, polished stone to papery petals. See the bespoke, bejeweled cape and the brushy, brocaded pillow. Which figure do you think is having a bad hair day? It’s all quite eye-boggling: no artist before (and very few since) had mimicked reality so very well.

The details aren’t there just for the sake of it either. The small white dove channeling towards Mary on gilded rays stands for the Holy Spirit. The white lily near the foreground is an emblem of purity. Even the church can be seen symbolically, with the dark upper story standing for the Old Testament, and ground floor (illuminated by three Trinity-referencing windows) the New. It gets better: the floor tiles show David beheading Goliath and Samson destroying the Philistine temple, two Old Testament events in the salvation of the Jewish people that prefigure the salvation of humankind through the coming of Christ.

Whether you believe in the annunciation or not – I’m willing to bet you’ll find something to marvel at in van Eyck’s painting at the NGA. 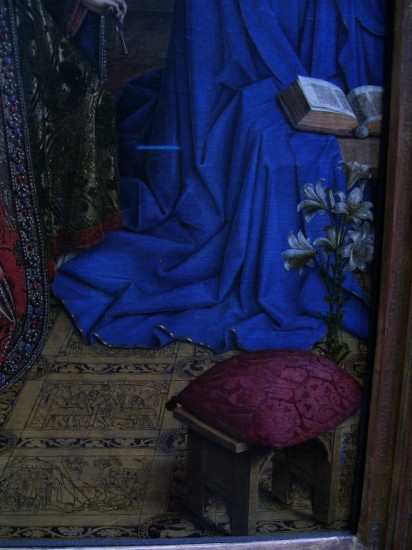 6 thoughts on “Delivering a Message”