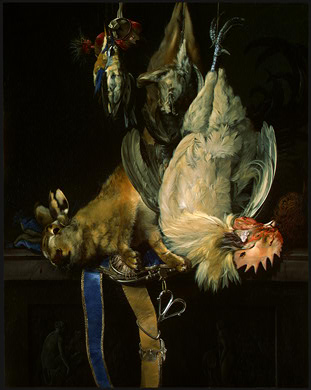 What’s on the menu for supper tonight? Some sizzling pork chops? Tender chicken thighs? Beef steaks? Lamb stew? Or is flesh (be it red, white or of the processed variety) completely off the cards? If so, you might have heard of Meat Free Monday, the environmental campaign that’s raising awareness of the climate-changing impact of meat production and consumption. Livestock production is responsible for 18% of global greenhouse gas emissions (more than the entire transport sector) and MFM is about avoiding meat once a week as a small step in the fight against climate change.

MFM is spearheaded by Paul McCartney, and his daughters Mary and Stella and already has a slew of celebrity supporters. The volume of greenhouse gases generated by the livestock industry are especially alarming when you consider that the meat industry is set to double its production by 2050! The gases produced by livestock are methane and nitrous oxide (respectively 21 and 310 times more powerful than CO2) and stay in the atmosphere for longer. Compassion in World Farming says that the average UK household could cut more emissions by halving meat consumption than by halving car use.

I’m signing up for MFM to reduce the meat consumption in our home, and hope others do the same. And in case any of us are concerned about symptoms of meat-withdrawal, I’ve found something for us to sink our canines into at the NGA. Still Life with Dead Game (1661) by the Dutch painter Willem van Aelst (1626 – 1683) should be more than enough fabulous flesh to keep any cravings at bay until Tuesday. 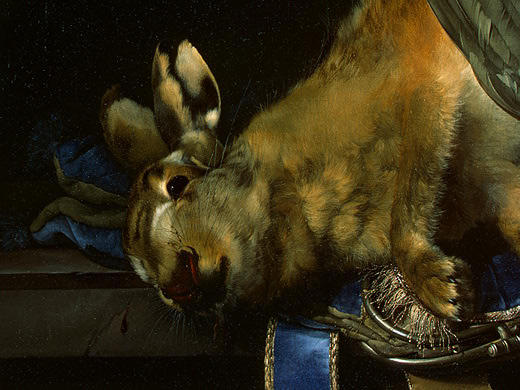 Born in Delft, van Aelst came from a wealthy family. His specialist subject was still-life painting, but he diversified within the genre, painting fruit and flower pieces as well as hunting scenes. This kind of painting typically shows stacks of dead game together with hunting gear: they became popular after mid-century, and van Aelst appears to have been particularly influential in the development of the genre.

Here the artist picks out a bundle of dead animals slung off a hook and resting upon a stone ledge (where there’s also a blue and gold hunter’s pouch). The verisimilitude is just so striking. How does he make the rabbit’s fur so soft, and the whiskers so fine? Then see how he brings out an entirely different texture for the cockerel’s feathers. For me, this bird’s comb and wattle are even sharper and more convincing than Audubon’s attempts from yesterday. Hanging up high are a partridge, a kingfisher and a common wheatear. There are also two falconer’s hoods, indicating the nature of the hunt. 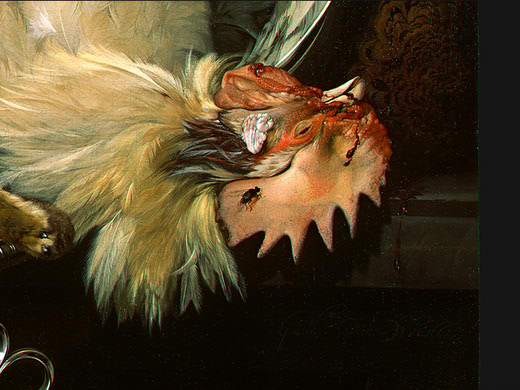 As well as accosting us with its fresh-flesh spoils, this painting also addresses the theme of hunting more broadly, through the relief on the front of the stone ledge. It shows Diana and Actaeon (a popular story from Ovid’s Metamorphoses), which describes how Actaeon, a mortal hunter, accidentally disturbs Diana, the goddess of the hunt, at her bath; Diana transforms him into a stag as punishment.

Paintings like this were greatly praised in their day and van Aelst received high prices for his works. No doubt changes in Dutch society played their part: mountains of meat reflected the growing wealth and increasing sophistication of patrons in the Golden Age of the seventeenth century. But even in our changing times, when we’re beginning to shift our attitudes towards meat consumption, this picture loses none of its relevance. Because you see, chomping down on this sort of fleshy feast doesn’t stress our environment one bit. 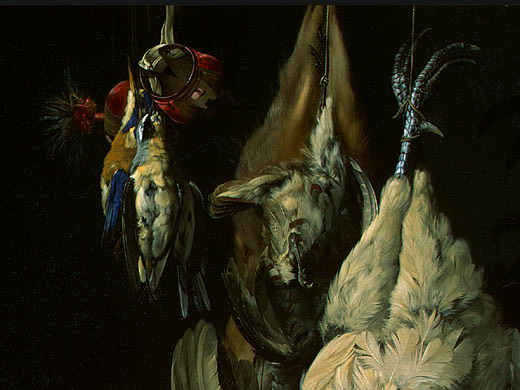