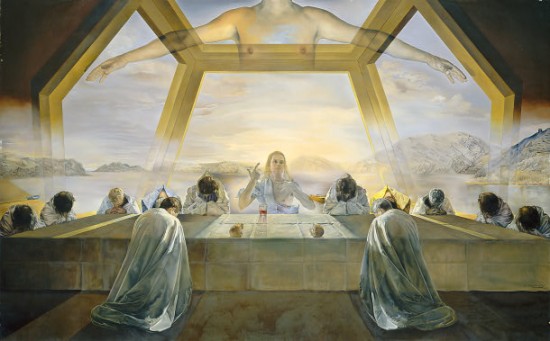 On the day before his crucifixion, Jesus gave his disciples a ‘mandatum’ (commandment), which was to love one another, and practiced this preaching by washing the feet of each disciple. At the Last Supper (on the same day), Jesus uttered another ‘mandatum’ as he broke the bread, telling the disciples to “do this in remembrance of me.” From the Latin word ‘mandatum’ comes the word ‘Maundy’, making this Maundy Thursday. In the past, British monarchs would wash the feet of 13 people to mark this day, or they’d give specially minted ‘Maundy money’ to the poor.

Today’s painting The Sacrament of the Last Supper is by the Spanish artist Salvador Dalí (1904 – 1989), perhaps the best-known of the Surrealist artists. Originally from Catalonia, Dalí moved to Paris in 1929 and became actively involved with Surrealism, which flourished there in the 1920s and 30s. Dalí was deeply influenced by the poet André Breton, the founder of Surrealism in 1924. He was also drawn to Sigmund Freud, the father of psychoanalysis, whose studies of the unconscious had been published in The Interpretation of Dreams in 1900. 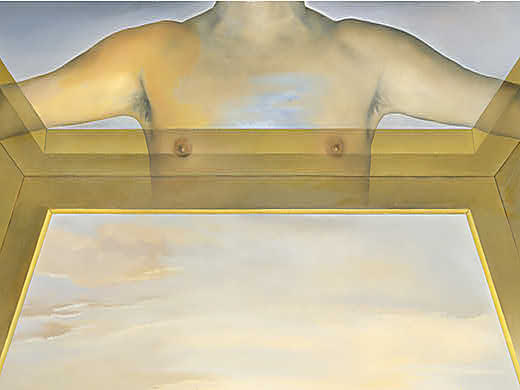 Completed in 1955 after nine months of work, this painting shows that Dalí continued to work in a Surrealist manner throughout his career. Here, he’s taken a classic Christian theme and juxtaposed it with jarring Surrealist elements. The hyper-realist style – typical of the artist – is astounding and alluring. Dalí used meticulous painting technique and fastidious attention to detail to create what he called “hand-painted dream photographs.” We believe he used fine sable brushes and a jeweler’s glass for close work, and built up layers of paint gradually. See the individualized strands of hair on the heads of the disciples, the hands of Christ, the crust on the bread, the translucenct wine in the cup.

Surrealism wanted to tap into the unconscious and artists like Dalí invented ways of generating images automatically. When he practiced his “paranoiac-critical activity”, Dalí would stare at one set of objects until he could ‘see’ others. So at this Last Supper, the artist has accessed a source of fantastic and dreamlike imagery to produce a free and unfettered ‘re-imagining’. See the hovering, truncated torso with outstretched arms, the boats on the water spied through the flesh of Christ, the angular window-frames and the dream-like landscape of faceted rocks and vaporous waters that rolls behind and right through the figures in the foreground. 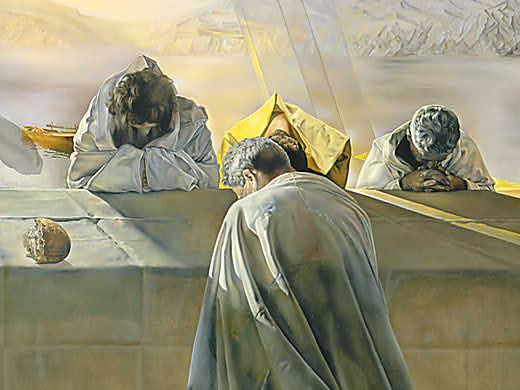 And yet for all the Surreal symbolism and unexpected elements, this painting exudes an unshakable sense of balance and proportion, due to the fact that the composition was laid out using the Golden Ratio. Also known as the divine proportion, golden mean, or golden section, the Golden Ratio is a number often encountered when taking the ratios of distances in simple geometric figures. This painting is framed in a golden rectangle and the table is positioned exactly at the golden section of the height of the painting. The two disciples at Christ’s side are at the golden sections of the width of the composition.

In the Christian Gospels, the Last Supper was the final meal Jesus shared with his disciples, and the moment he instituted a new covenant of his blood and body (the wine and bread). Here Dalí lends fresh emphasis to the words “do this in remembrance of me” as his smooth-cheeked, leanly muscled Christ points simultaneously towards himself and upwards. Dalí hoped his images would revolutionize modern life: it’s for us to decide if this work, one of the NGA’s most popular paintings, goes any way to achieving that aim. 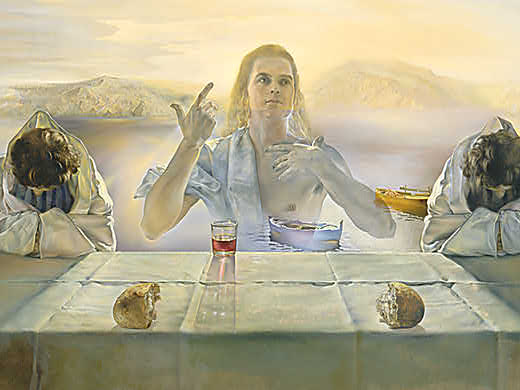 4 thoughts on “In Remembrance of Me”