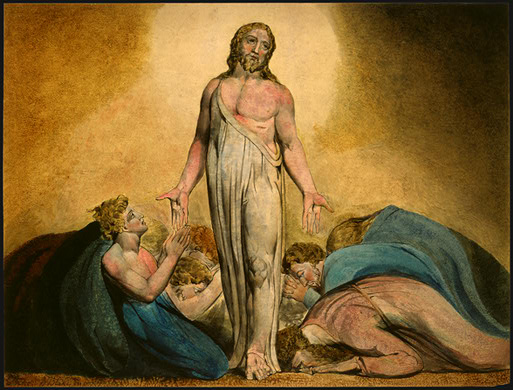 Once the eggs have been hunted and the chocolate consumed, Easter Sunday celebrates the resurrection of Christ, which is his return to bodily life after death on the cross. In the New Testament, after Jesus was executed by Roman crucifixion and entombed, he was raised from the dead on the third day, while the guards at his grave slept, oblivious. The empty tomb was found by Christ’s followers and he appeared to many people over a span of 40 days, before returning to heaven.

Christ’s resurrection is the linchpin of the Christian faith and the historical event upon which its doctrine stands or falls. The apostle Paul makes this clear in one of his letters to the Corinthians: “But if there is no resurrection of the dead, then not even Christ has been raised. And if Christ has not been raised, then our preaching is futile and your faith is empty.” The New Testament even insists that belief in the bodily resurrection of Christ is a necessary condition of Christian faith, that no one can be saved apart from it. This insistence is found in verses such as Romans: “Because if you confess with your mouth that Jesus is Lord and believe in your heart that God raised him from the dead, you will be saved.”

The poet, painter and printmaker William Blake (1757 – 1827) often physicalized and visualized this sort of bold, biblical belief in his art. He derived many of his subjects for painting and illustrating from the Bible (other sources included the 17th century English writer and polemicist John Milton, and the playwright Shakespeare). Born in London, Blake’s apprenticeship with the engraver James Basire gave him a thorough grounding in printmaking techniques, which he used to produce color-printed editions of his own poems. In these, the words and illustrations appeared on the same page, rather like in medieval illuminated manuscripts. 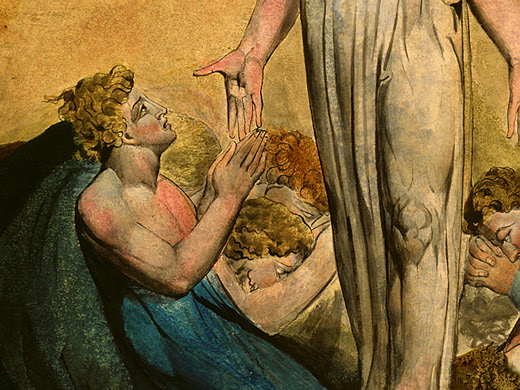 Blake came from a family of Nonconformists (people advocating religious liberty) and Blake’s own highly individual views on religion and the state did much to shape the course of his art. This work at the NGA is called Christ Appearing to His Disciples After the Resurrection (c. 1795) and is a print, hand-colored with watercolor and tempera. It’s shot-through with the unique and individual nature of Blake’s aesthetic interpretations.

In visual terms, this work tells us about the things that influenced Blake as an artist. The undulating curves that roll over the backs of the disciples create stream-lined and sinuous pacing patterns that recall similar effects in Gothic art (which Blake had studied during his apprenticeship). Elsewhere however, there are other inspirations at play. Blake’s figures are typically muscular and they owe much to the Renaissance master Michelangelo. Here, the body of Christ is firmed up and thickened, backing up Blake’s belief in the resurrection. Though the stigmata and signs of physical suffering are showing, the muscled shoulders, defined thighs and solid arms add visual weight and vital credence to this cornerstone of Blake’s faith. 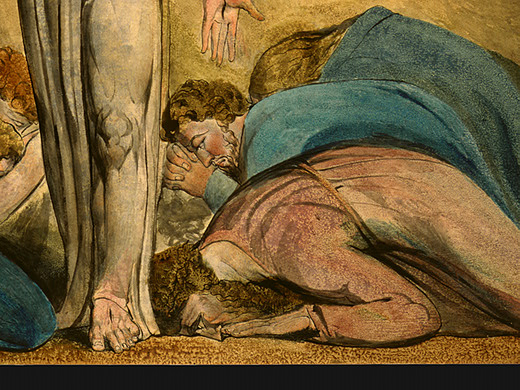 Blake’s painting often baffled his contemporaries, particularly as he claimed that many were inspired by visions he’d had. Indeed an image like this does exude a sense of intimacy. The huddle of heads, grinding and groveling (some are even flush to the floor), creates an odd (and totally engaging) backdrop. The syrupy glow that emanates from Jesus sets a definitive mood too. The warm flesh tones on the exposed bits of body flush fierce focus-on-the-physical into the picture. And Christ’s (just) larger than normal eyes could make someone look at this with new eyes. 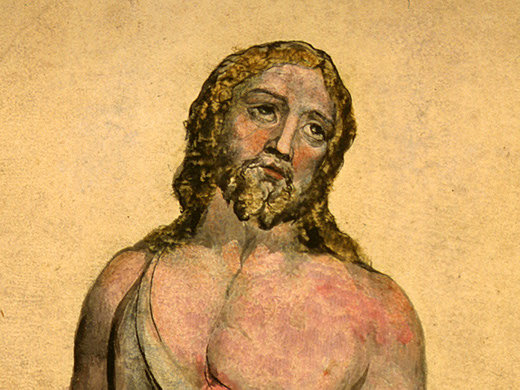