Over three days in February 2007, artist Mel Bochner and his assistant installed Theory of Boundaries (1969 – 1970) at the National Gallery of Art in the East Building. The work consists of four squares of equal size, each separated by a space equal to one-third of the width of a single square. Dry pigment is applied directly to the wall, with each square following the principles determined by a “language fraction”. So “at/in” describes the hard-edged square at the left, while “over/in” refers to the blur-edged one next along, and so on. In wordage and image, each square represents a different relationship between colored surface, border, and state of enclosure.

Mel Bochner (American, b. 1940) moved to New York in 1964 and got involved in two of the major movements of the time: Minimal art (already being developed by artists like Donald Judd, Dan Flavin, and Sol LeWitt), and Conceptual art, a then-nascent movement of which Bochner would become a key figure. The two strains of influence are evident in Theory of Boundaries: on the one hand, it’s object-based in its revealing the “mechanism” of its creation, and on the other it’s art that proposes an idea, rather than a physical object.

A constant concept in Bochner is the idea that society is riddled with structures and systems that control and define our everyday lives. One aspect of this is language, whereby written and spoken words are seen as a series of rules and regulations that precede the individual and must be obeyed. It’s clearly the “word fractions” in this work that prescribe the appearance and character of the squares. And the point being made must be that the linguistic system is in charge, rather than the artist. 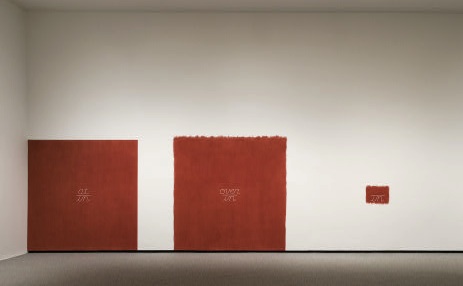 Another conditioning factor that Bochner explores is space: here, the first and foremost infringement on the work’s appearance and scale is the NGA gallery it’s installed in. Red pigment plastered onto a wall is a straight-forward and simple gesture, but it’s the contextualization of the work that carries connotations. Bochner is saying that, if the nature of the space his work is seen in gets to decide the dimensions and demeanor of his art, then the artist’s autonomy has been seriously axed.

The ideal white gallery space is an archetypal image of 20th century art. When this sort of environment first became popular in the 1960s, the clean, straight planes and lack of distractions were established as ideal viewing conditions. But soon enough another point of view raised its head above the parapet. In the early 1970s the artist Robert Smithson wrote in his essay called “Cultural Confinement” that the uniform shapes and blanched walls of contemporary gallery spaces were like prison cells that sucked the creativity and contention out of art. For me, Bochner’s work flits beautifully between both points of view. Theory of Boundaries seems to benefit from its clean, uncluttered surroundings, but its context at the NGA also calls to attention the considerable role the institution plays in shaping and subjugating the work. 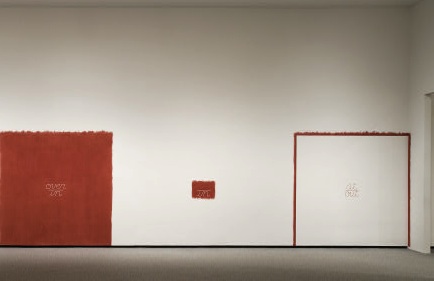 Bochner’s art considers the compromise and clipping of wings that occurs continually in all our societies. Once you’ve looked at this and thought a bit about it, it’s impossible not to start analyzing all the little, large, laughable and lethal things that we’re controlled and conditioned by day-to-day. From the size of a piece of paper or the length of road, right through to social taboos or human rights. And whether we like it or not, Bochner’s bright red question “what’s controlling you?” is as relevant now as it ever was.