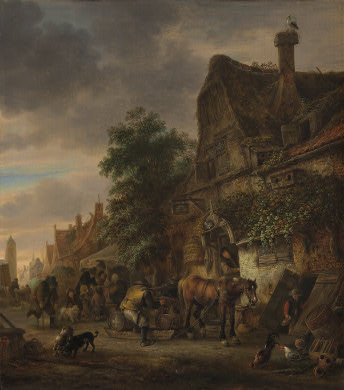 “Your usual?” Of all the questions people ask each other back in Britain, this one’s got to be one of the best. It’s short, simple, to-the-point, and implies complicity and understanding. And I’ve only ever heard it in a pub.

Ah, the goode olde pub! Is there a thing more British? Right up there with Fish ‘n’ Chips and red phone booths, the pub represents the very heart of the UK. Back in June last year, Michelle Obama couldn’t resist taking her girls to an English pub: traffic stopped and crowds gathered as the First Lady visited a watering hole called The Audley in Mayfair.

Back in Blighty, pubs are built into the fabric of villages, towns and cities just as dropping into the pub is part of people’s routine. And they range from rough and ready to ritzy glitzy, to suit all kinds of clientele. On the seamier, seedier side there are the chains, where the carpets are mottled (useful for disguising most stains), the music is loud (dims the sound of fists thwacking jaws) and the drinks are cheerily cheap. In the more elevated pub echelons are places like The White Horse in London’s Parson’s Green, dubbed ‘The Sloaney Pony’ after all the posh totty that tends to congregate there. Think boys with floppy fringes in tight trousers and eyelinered girls in sloughed up Ugg boots, all just back from boarding school for the holidays.

But let’s cut pub calibre out of the equation because, when it comes to pubs it’s all about your “local”. Wherever you live and whatever you like, your local is the pub you choose to patronize. It’s where everybody (or at least somebody, hopefully) knows your name (and, of course, your order). 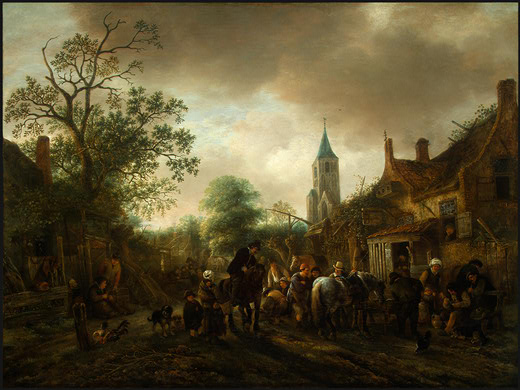 It was the wonderful whiff of pub gemütlichkeit that first attracted me to these two paintings by the Dutch painter Isack van Ostade (1621 – 1649). The youngest of the eight children, Isack was born in Haarlem and became a member of the painters’ guild there in 1643. He was a student of his more famous older brother, Adrian van Ostade, though it wasn’t long before Isack developed his own artistic personality. He died very young, aged just 28, but while his career was short, his output was prodigious and his creativity and originality striking. He also had extensive influence on his contemporaries. 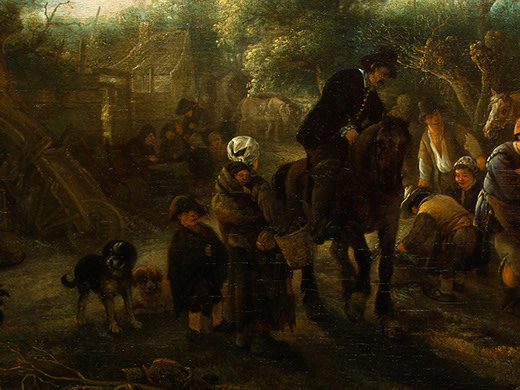 The Halt at the Inn (1645) and Workmen before an Inn (1645) are both examples of the kind of painting Isack van Ostade came to specialize in: outdoor peasant and village scenes in which the genre (everyday) elements are combined with an evocative treatment of landscape settings. And would you know it, he was a fan of the inn. The Halt shows milling activity outside a local drinking hole: two well-dressed travelers arrive and dismount from their horses. A beggar woman with a child strapped to her back stands to watch while other figures converse with one of the travelers. 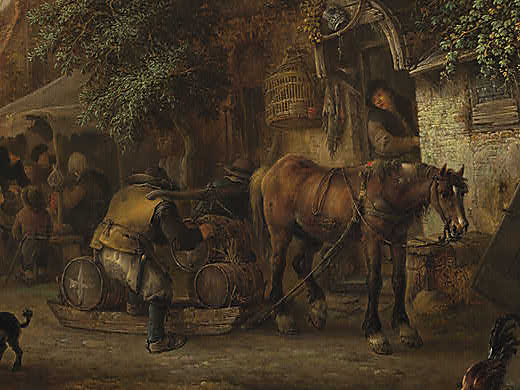 The Workmen (seen at the top) painting is more unusual in its depiction of men restocking the inn. See the two laborers yoked together, hauling beer kegs off a sledge while their overworked, underfed horse stands by. In both works the character of the buildings and settings are picturesque, but it’s the informality and conviviality of the teeming people that van Ostade makes most appealing. And while both paintings show steeples rising overhead (possibly suggesting conflicting values between tavern and the church), there’s a stork’s nest resting in the inn’s chimney in the Workmen painting. That’s an official, recognized sign of good luck, so mine’ll be a pint of cider, thank you very much. 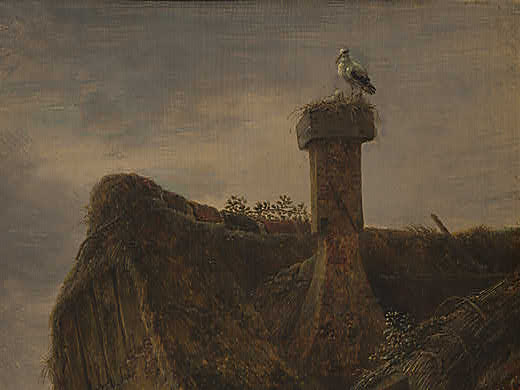 One thought on “The Local”