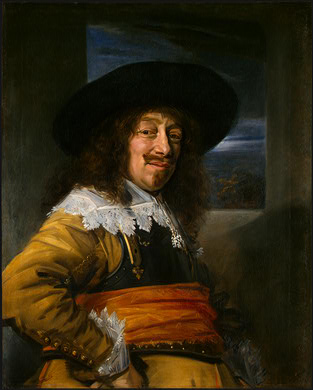 The fact that this Member of the Haarlem Civic Guard, (c. 1636) by the Dutch artist Frans Hals (c. 1582 – 1666) caught my eye so quickly on a recent visit to the NGA can only mean one thing: the mustache is back! Who would’ve thought, more than 300 years after the making, that this portrait with it’s festive festoon of facial hair would’ve been so bang-on trend in 2010? Yes indeed ladies, it’s high time to let go of those hair-in-odd-places hang-ups and embrace the hirsute, because it looks like the mustache (AKA tache, stache, nose twitchers, whiskers) might soon to be showing up on an upper lip near you.

So why the sudden reappearance? It’s been a long time since we took the Victorian view that “kissing a man without a mustache is like eating an egg without salt.” For a long time, the tache was the preserve of the English gent and looked a little, well, naff elsewhere.

Our Civic Guard here opts for a fine, ferrety mustache, with a tufty add-on tail trailing chin-wards. This man is a soldier (seen from his steel breastplate) but on the days this picture was painted, he put on his Sunday best (broad-brimmed hat, lace collar and cuffs) instead of his work clothes. 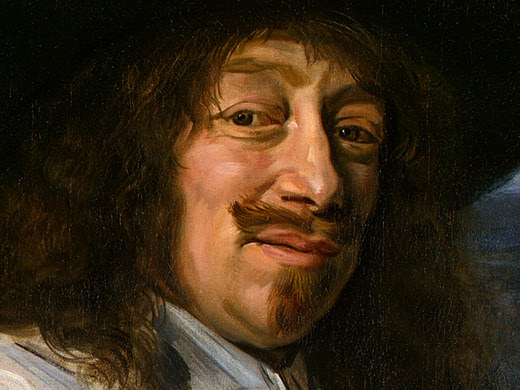 This is the only known portrait of an individual soldier Hals painted (his oeuvre is estimated at 300 odd), and it shows him at his painterly best. He brings the guard to life with dashing, bravura brushwork: the sleeve and sash detail shows well the bold and sketchy freedom of his technique. Hals also had an uncanny ability to capture fleeting expressions on the faces of his sitters. Here he starts with the hand-on-hip, swaggering pose. As the man regards us, his heavy-hooded eyes crinkle and twinkle, and there’s a half-smile waiting to light up his lips. The amused, quizzical expression quivers off the canvas: this is the kind of immediacy, vitality and realism that Hals injected into Dutch painting, electrifying the staid, formal portraiture of the day with a new pulse and power. 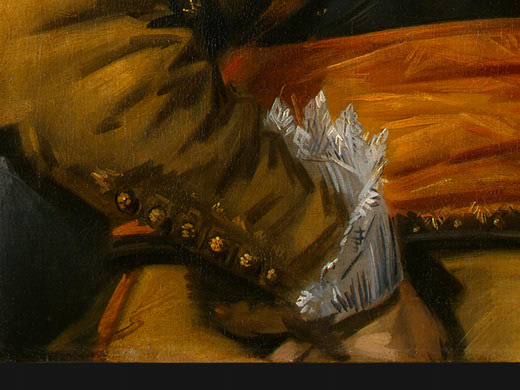 Hals really was the first great Dutch artist of the 17th century. One Haarlem schoolmaster, who’d sat for the artist put it well when he said “His paintings are imbued with such force and vitality that he seems to defy nature herself with his brush.” Hals made a few gigantic group images of the Haarlem guards, who had been integral in winning the north’s independence from Spain as the Netherlands fractured into north and south along political and religious lines in the late 1500s. The guards were divided into three companies based on the colors of the Dutch flag (orange, white, blue): this man’s sash marks him out as a member of the orange company. For me, when I clocked him, I felt he seemed as proud of his stache as he is of his sash.

You too could look as mustachioed and masculine as this, gentlemen readers. Just make sure you keep the food flecks out and the grooming in. As for the girls, this is one look we most certainly need to steer clear of.