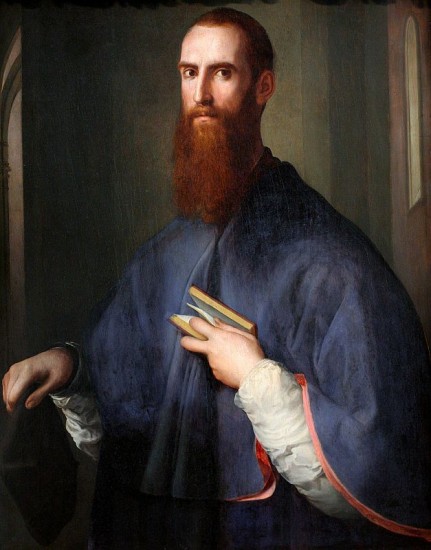 The despicable decline of our good manners is nothing new. I bet most of us can remember a time when a tense teacher or tetchy grandparent pointed out our lack of grace and general decorum. But now it seems the erosion of our etiquette is becoming a broader concern. Which straw was it that finally snapped the camel’s back, I wonder? No-one holding the elevator door? Teenagers (or any agers) texting during dinner? Travelers talking loudly into their phones, even in the quiet carriage of the train? Or was it social media that totally unfettered our uncouth inclinations? Have you seen how easy it is to ignore or delete “friends” on Facebook?

Thankfully, it seems our crumbling civility is finally forcing us to forage for our manners of old. Check out MIEN, a British online magazine dedicated to helping readers improve their social graces. Not for fuddies or duddies, MIEN tailors etiquette to our times, from what cocktail to order to how to conduct an actual, face-to-face conversation. Hollywood is also turning the spotlight on comportment, with Warner Brothers developing a romantic comedy based on Emily Post, the late American doyenne of good manners. The plot follows the transformation of an ill-mannered man into a gentleman and incorporates Post’s bestselling book Etiquette in Society, in Business, in Politics, and at Home.

There’s a gentleman at the NGA who’d be appalled at our growing disregard for social decency: Monsignor della Casa (1541 – 1544) is by the Italian painter Jacopo Carucci (1494 – 1557), who’s known simply as Pontormo. Pontormo spent all his life in Florence and was famous for his religious works. He was a key figure in the transition from Renaissance to Mannerism (the 16th-century style of painting, characterized by distortion and imbalance): his works show a passionate and restless style that broke with classicism.

The subject of this portrait is most likely a man named Giovanni della Casa, who belonged to a wealthy Tuscan family and rose to prominence in the service of the church. A poet, humanist and political theorist, della Casa circulated at the highest levels of Italian intellectual life. And (would you believe it) this Monsignor wrote a book on manners! Entitled Il Galateo, this treatise came out in 1558, was translated into several languages and achieved real renown for the author. And even though the portrait shows the sitter in his early thirties, before he’d brought out his book, the direct gaze, sober self-possession and elegant carriage of the man tell me he was already busy making mental notes. 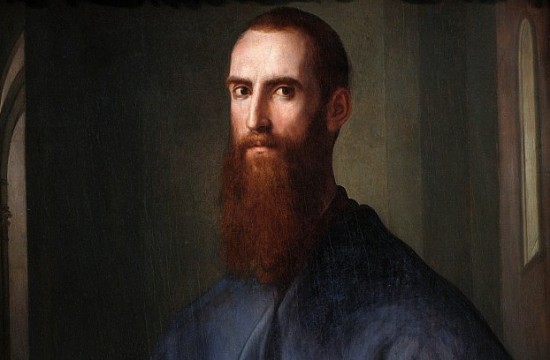 We see the Monsignor in a dim interior, which might be the inside of Florence cathedral. Pontormo’s Mannerist style comes to the fore, revealing his seamless synthesis of fantasy and acute observation. We get a good dose of realism here, from the high forehead with its deep-set eyes to the dangling tresses of the beard. But this physical reality is intensified by plausible exaggerations. See how the Monsignor’s small head is made to look even smaller by the conical bulk of his caped torso, looming large against the picture plane. His long fingers too, as elegant as they are, are bordering on becoming tentacle-like.

No doubt the Monsignor would approve of the latest efforts to elevate etiquette. Schools are leading the way, with more and more curricula including lessons on manners. I read about one teacher in an Arizona high school who’s insisting that the boys in his classes show good old-fashioned chivalry. Personally, I’ll just be sure to hold open a few more doors, and I’ll try to text a little less at the table. (Unless it’s an urgent email, of course). 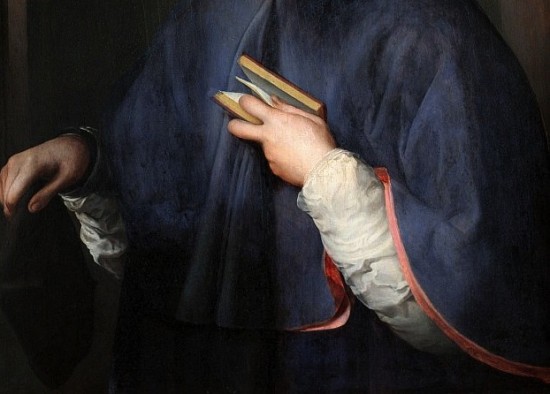