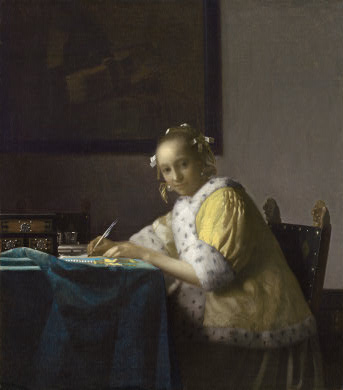 Can you believe that Jan Vermeer (1632 – 1675), the same artist we now celebrate as one of the greatest of all Dutch masters, suffered centuries of obscurity? It was only in 1866 that he was “discovered” by the French writer Théophile Thoré, who dubbed him the “Sphinx of Delft” because so little was known about him. There are still few documented facts about the artist’s life and only about 35 paintings known to be by him, making the NGA’s clutch of four originals all the more covetable.

A Lady Writing (c. 1665) sticks to Vermeer’s usual subject choice of a woman inside a Dutch interior (his parents’ home, which he’d inherited). This lady looks openly, almost questioningly, at the viewer. The painting gains its exquisite effect in a number of ways. The simple composition is marked out by verticals and horizontals that contrast with the pyramidal form of the sitter. The darkened, draped table in the foreground leads the eye into the scene beyond.

In terms of color, it’s a muted harmony of yellows, blues and browns that hangs the picture together. And of course, this being Vermeer, it’s all about the pearly lighting. As is typical in Vermeer, the light hits in from the left, enlivening the earrings and hair ribbons, the catches on the writing casket and the brass tacks on the chair. From a distance, Vermeer’s paintings may appear smoothly painted, but up close the individual brush marks and blobs of paint with which he recreates the play of light reflected off different surfaces are visible. His paint surface has been likened to “crushed pearls melted together.” 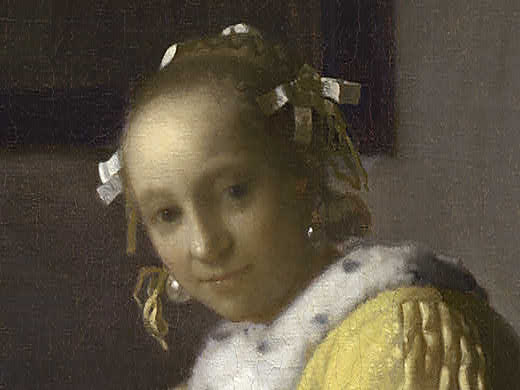 In order to achieve his uncanny realism, Vermeer probably used a camera obscura (Latin for dark chamber), a darkened booth or box with a pinhole that allows an image of a brightly-lit scene to be projected onto a screen. Vermeer valued the resulting images because they duplicate the selective focus of the human eye: only objects at a certain distance from the camera or the eye are in sharp focus, and that’s exactly the optical effect he’s generated here.

As well as the magical lighting and photographic clarity, this picture works another alluring angle. The elegant poise of her hands, the quill paused momentarily on the paper: these things really reconnect the viewer with the written word. Taking the time to write on paper is becoming more meaningful in our times. Sure, it’s hard to imagine our lives without the ease and efficiency of the electronic epistle, but it’s sad that texts, emails and social media seem to be deleting hand-written missives. Personalized notes may be common following a big life event like a wedding or a funeral, but how often do we sit down to write a letter just because we want to brighten someone’s day with some considered, hand-scripted words? 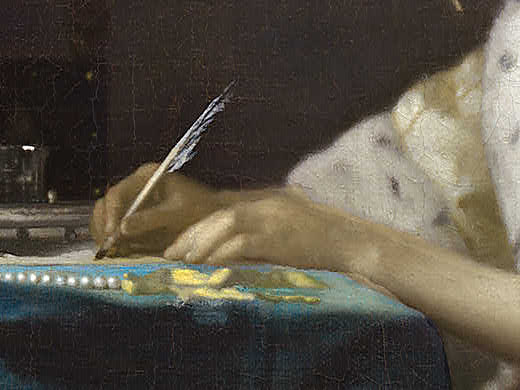 Lilia Fallgatter is the author of The Most Important Letter You Will Ever Write and reckons writing is the best way to communicate feelings to loved ones (as well as colleagues). She says: “Good words are worth much and cost so very little. They can even help re-establish or strengthen bonds.” Along similar lines, Samara O’Shea’s For the Love of Letters and Note to Self both promote putting pen to paper. On her website LetterLover.net, O’Shea quips “I’m here to remind you that there is nothing—not a text message, not an IM, not a Facebook status update—that competes with the emotional connection made through a letter.”

Vermeer’s painting shows us that not only can the act of letter writing be silently soothing, but the physical objects are treasures to be cherished and stored away. 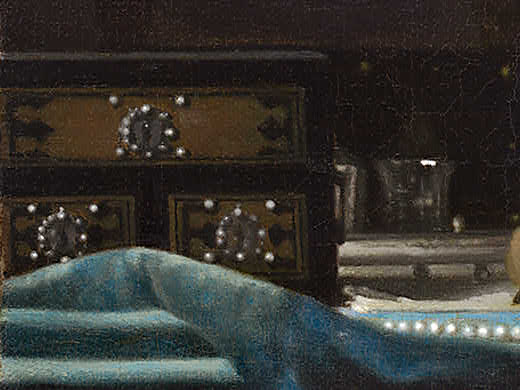