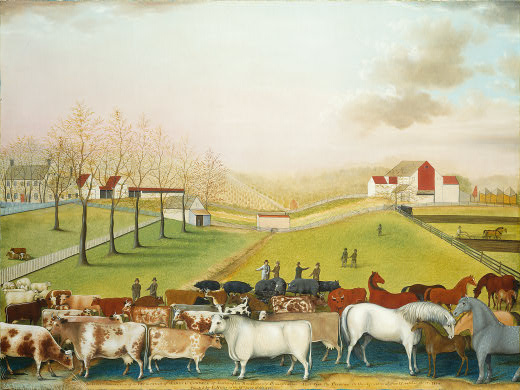 At the start of the 20th century, the farmer was the go-to-guy for food, and you knew exactly where your meat and two veg were coming from. Fast forward 100 years and where are we? For whatever reason, I reckon the average consumer is hard-pressed to cite the spot their breakfast bacon and berries came from. So thank goodness that in the midst of our farmyard confusion there are sprouting signs of new interest in Old McDonald and his farm.

For a start, farms are pushing up in unusual places. In San Francisco, chunks of the old Central Freeway have been transformed into the Hayes Valley Farm, a sustainable community project that produces fruits and vegetables. US yards and GB gardens are also turning over new leaves and getting in on the grow-your-own. Personal plots stuffed with beans, beets and bibb lettuce are popping up like never before. There’s probably a workshop near you, waiting to impart sowing and reaping know-how. Like Brooklyn’s BK Farmyards, who give tips on how to propagate piles of produce, or Redwood City’s Urban Chickens who teach you how to keep hens for fresh eggs and fab fertilizer. 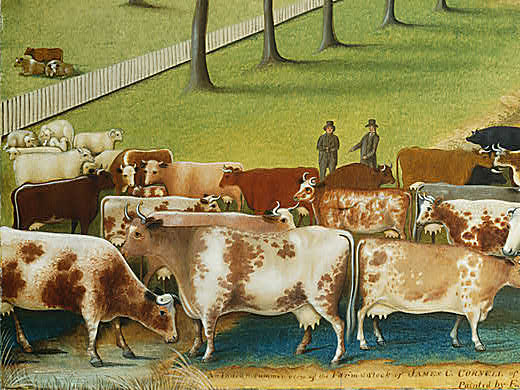 For a breath of fragrant farm air, let’s go down to The Cornell Farm (1848). This picture is by the American artist Edward Hicks (1780 – 1849), who was raised in Pennsylvania by a Quaker family after his mother died in 1781. At 13 he was apprenticed to a coach maker and worked in this trade for a time, until his feeling for his religious roots grew and he began attending Quaker meetings. Hicks became a minister in 1811, and set out on the first of many preaching trips. He was one of the most popular ministers of his time and his sermons reportedly attracted large crowds.

Despite feeling torn between his Quaker calling and his love of art (which he worried kept him from “the Lord’s work”), Hicks pursued painting throughout his life, partly as a way to “get an honest living.” He worked on variations on the Quaker themes of peace and love, completing more than 60 versions of the Peaceable Kingdom (a scene showing an eclectic cluster of animals, all quiet and calm). The Cornell Farm dates from the last decade of the artist’s life, when he produced a crop of his best pictures. The subject is clearly sign-posted by the inscription along the bottom: “An Indian summer view of the Farm & Stock OF JAMES C. CORNELL of Northampton Bucks county Pennsylvania. That took the Premium in the Agricultural society, October the 12, 1848 Painted by E. Hicks in the 69th year of his age.” 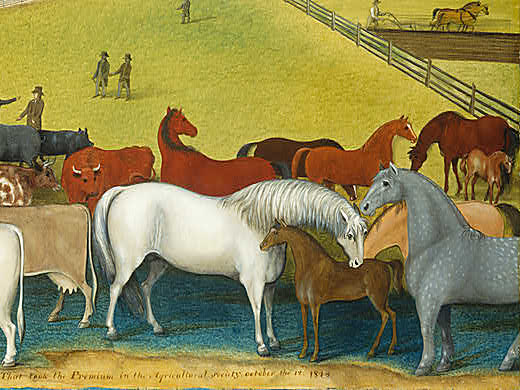 With no background in academic art, Hicks employs the direct approach of a primitive or folk painter. The horizontal band of overlapping livestock is charming in it’s child-like simplicity and yet still presents each beast as an individual portrait. That Hicks had an eye for a pretty pattern is clear in the alignment of fences, the planting of trees and the dotting of people. There’s an appealing contrast between the crisp silhouettes of the buildings and the more blurred effects over the orchard, which gives the impression of land receding beyond what the eye can see. 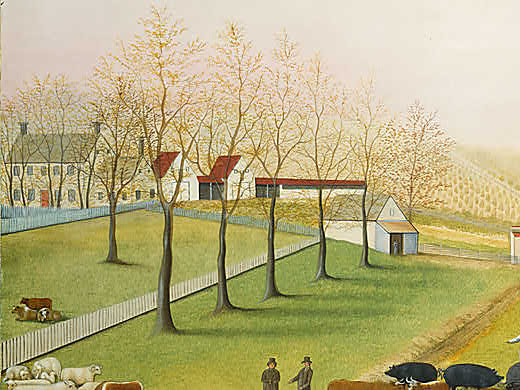 Here, Hicks plonks us right into a working farm, putting the prize-winning importance of such a place on show. If you’ve been inspired, you might find a farmer’s market in your neighborhood today. And failing that, check out Small Farm Central, which gives exposure to hundreds of farms in the US and Canada, helping farmers sell their products and share stories with an interested audience. 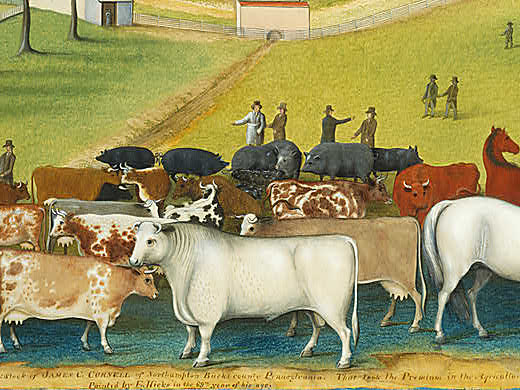