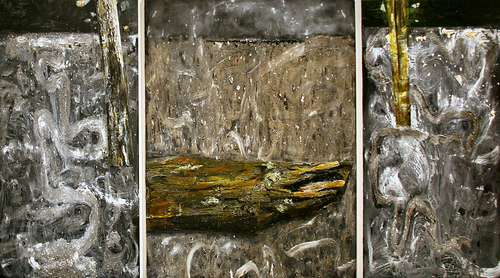 So. Suddenly Iceland’s on the map. Before, people might have struggled to locate this European island country in the North Atlantic Ocean, but now it’s all anyone can talk about. The eruption of the Eyjafjallajökull volcano last week has caused colossal natural knock-on effects. But, of course, it’s the disruption to air travel (the worst modern Europe has ever seen) that’s totally rattling us. Planes are grounded and millions are stranded away from home.

What’s most unsettling is the fact that no one knows when things will get back to normal. The volcano seems far from finished with spitting out its grit. Saturday saw a slew of new, mini-eruptions that threw up fresh fears about longer-term damage to world air travel and trade. An Icelandic geologist has said: “There doesn’t seem to be an end in sight. The activity has been quite vigorous, causing the eruption column to grow.”

Pictures of the volcano have been both menacing and mesmerizing: smoke and steam shooting skywards as the magma is cooled by the glacial cap; sludge-mud and flood waters tracking through deep downhill ditches; ashy plumes of grit blackening the sky with fine, viscose dust. It was these images that came to mind when I saw the painting North Branch (2008) by John Walker (b. 1939) in the NGA late last week. An English painter and printmaker, Walker studied first at the Birmingham School of Art and later in Paris. In 1985 he was shortlisted for the Turner Prize and he’s had a high profile ever since. 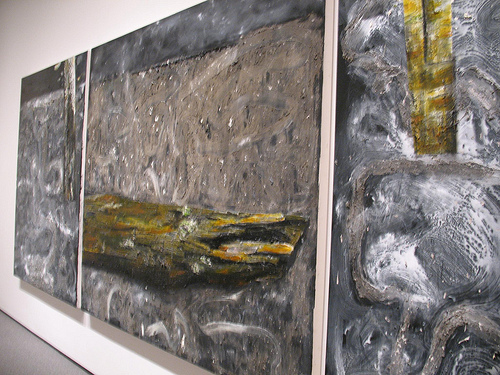 This large-scale landscape painting is a recent work, completed in 2008. It comprises three canvases, hung together in triptych formation. Since they collectively cover so much wall space (213 x 579 cm), their effect is instantly overpowering. It’s a mixed media work and has an uneven, roughened, aggressively mussed-up surface. Aside from the actual textures of the canvases, North Branch becomes a really physical painting through its gestural appearance: you can actually trace the arm movements of the artist. Look to the swirls and squiggles that move energetically, coiling, whipping, dragging, slashing. This mobility in the paint has a lot to do with Abstract Expressionism (see March 8th), which influenced Walker from an early stage in his career.

Of course this is not a traditional landscape painting, in as much as there’s not a hill or a crop of trees in sight. Instead, everything gets jammed up in our faces, thrust against the picture plane. Walker makes our connection to (and understanding of) the subject minute and immediate. Take the tree trunk hammering into the central canvas. The colors (oranges, yellows, greens, grays, browns) tell of his close observation and efforts to grasp at the essence of a natural thing. 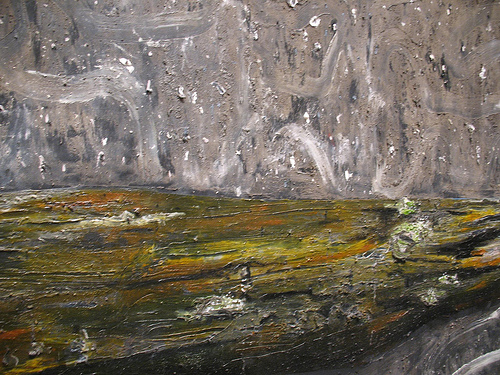 For all the whipping wildness here, Walker does introduce aspects of organization and visual control. See how the smaller side scenes bookend the central view with their more vertical, shooting forms and a distinctly different color palette. He connects the horizon line too, running it through all three panels. So overall, the exploding sense of earthy abandon gets reined in by some form and focus.

One of the most frightening thoughts to emerge from the Iceland eruptions is the fact that we’re so much at the whim of the wildness of nature. It takes something like this to remind us of our trifling size and our insignificance in the face of forces much bigger than us. People will have to wait for weeks, until the volcano’s detritus stops spewing forth. And as someone with a family all the way in the UK, I never felt so far from home.