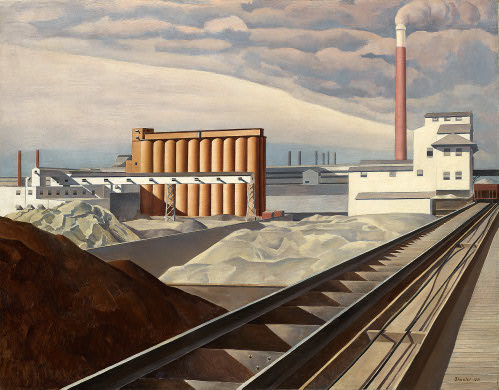 In 1927, the American artist Charles Sheeler (1883 – 1965) was paid to photograph Ford Motor’s new River Rouge Plant near Detroit for the company’s advertising campaigns. During the course of the commission, he became so profoundly inspired by the subject (calling it “incomparably the most thrilling I have had to work with”), that he went on to paint several pictures of the plant.

Classic Landscape (1931) is utterly eye-catching for its distilled, clinical execution. I think it suggests beyond any shadow of a doubt that Sheeler’s twinned pursuits of painting and photography were stylistically symbiotic. Educated at the Pennsylvania School of Industrial Art and the Pennsylvania Academy of the Fine Arts, Sheeler dabbled at first in a loose, impressionistic style that he rejected quickly, in favor of the austere realism we see here.

Classic Landscape is painted with oil on canvas, but the finish is so smooth and the precision so pin-sharp, that the level of realism is confounding to the eye on first view. There’s the slick rail track shooting off on a diagonal into the scene, chugging the eye along with it, deep into the plant. The spatial recession is calculated and clean, with objects measured and meted out into space. Sharp shadows cut into the ground and across the buildings: on the one hand the shading adds realistic roundness to the 3D objects, but on the other it somehow doesn’t detract from the overall dazzling flatness of the scene. 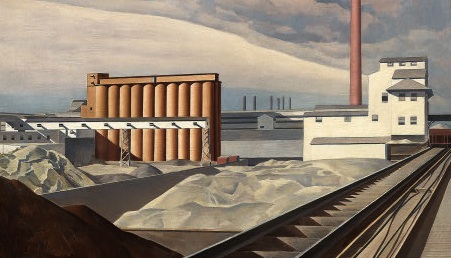 Sheeler keeps his colors super simple: not much deters from the pared-down palette of whites, browns and blues. Instead, he seems hyper honed in on the angular, geometrical shapes in the scene: the pyramidal mound in the foreground, the cylindrical silos in the middle distance, the rectangular buildings and straight, exacting lines everywhere. The stark real-life lay-out of plant must have been endlessly fascinating to an artist like Sheeler, who loved neat forms and abstract design. It’s only the rushing diagonal of the rails that pierces the stark, drum-tight tension of the composition.

It’s quite interesting that a painting like this has become one of the best-known works of its era and a key masterwork of twentieth-century American art. In many ways, it’s a sharp-cut sign of its time: the Ford plant that Sheeler captured in the 1920s and 30s was the world’s largest industrial complex, with more than seventy-five thousand workers producing the Model A car. The fact that here Sheeler has focussed on a rather random part of the plant (where cement was made from by-products of the manufacturing process), says a lot about the broad-based, whole-hearted celebration of industry that was common at the time. I’d even say Sheeler has sought to subtly compare the towering, grinding machinery of his era’s technological advancement with the fruits and fertile developments of some classical golden age (witness the title of the painting and the ancient architectural shapes in the buildings).

I wonder if we’d find many artists working today so readily translating sites of industry into clean, stream-lined and elegant images of production and progress. The fact is that now, just about eighty years on, we’re drowning in the physical fallout of what Sheeler started charting here. Junk-addled automobile graveyards are one of the most common products of our technological society. As the designer George Nelson so aptly put it when writing about man-made environments: “One might reasonably say, with a reasonable probability of being right, that come war or peace, affluence or depression, junk is now our ultimate landscape.” 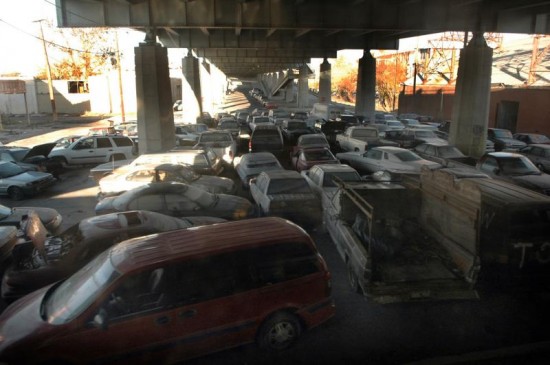