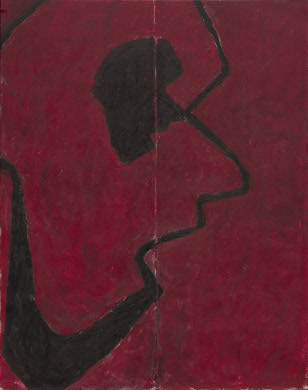 There are two important works by the painter Susan Rothenberg in the NGA’s permanent collection: Butterfly (1976) is currently on loan to the White House (and is shown below), and Head within Head (1978) is on view in the East Building. Recently at the NGA, Rothenberg appeared in conversation with Harry Cooper (head of modern and contemporary art). One thing that was immediately refreshing about seeing her in person was the revelation that real life impacts art. She started using acrylics when she had a baby girl, as oil was too tough to wash off her hands. And when she moved to rural New Mexico with her husband (the artist Bruce Nauman) in 1990, her work all-together altered to reflect her new environment.

Rothenberg seems always to have honored her commitment to paint. Born in Buffalo in 1945, she received a BFA from the Fine Arts School at Cornell University in 1967. Her first solo exhibition in 1975 met with great acclaim for its three large paintings of horses in stark silhouette. This at a time when “anything but painting” was in vogue: minimal and conceptual art dominated the New York scene and performance and dance were popular.

Head within Head (1978) is painted with acrylic and Flashe on canvas. Flashe paint covers well, giving a perfect matte finish and pure opacity and Rothenberg described how she likes using it as an alternative (or accompaniment) to oil. This picture is choc-full of pigment, loaded and ladled to the brim. Scouring across the surface is the artist’s distinctive brushstroke, which is at once lively and disciplined. The Flashe paint allows a more profiled appearance than acrylics alone would do, creating an energetic and textural finish. The multi-directional evidence of Rothenberg’s hand is all about retaining the visibility of the painter’s process, which includes impurities and accidents as well as fortuitous discoveries. See the seam running down the center of the canvas and the uneven effect that dapples all over.

The meaning of this picture remains elusive. A dismembered head hangs anti-gravity in an airless, spaceless vacuum (Rothenberg tends to avoid horizon lines, which she says diminish her freedom and potential). Nonetheless, the head is anchored, or located, by the black lines to the side of the canvas. The stark and saturated colors herald a hot-under-the-collar effect, as does the figurative, double-focus flexibility of the shapes: some see the smaller head as the eye of the larger one (though Cooper professed he’d “never looked at it in that way”). Ambiguity is a recurrent motif in Rothenberg’s work and I got the feeling she works to make it that way, enjoying the juxtaposition of “wholes” with “holes”.

Rothenberg’s career thus far has served as a constant declaration of the power of paint. She took it up when it was out of fashion, spurred the painting push in the 1980s and continues to work prolifically to this day. People say she’s “done more than any other living artist to expand the poetic and painterly possibilities of her craft.” And yet she remains delightfully unaffected by the accolades she receives. In person, she’s down-to-earth, clear talking and straight-shooting. Wearing a plain plaid shirt and casual trousers, she repeatedly discounted high-flying interpretations of her work by Cooper and audience members with “I just don’t know how to answer that.” Though I did get the feeling she wasn’t giving too much away, since at another point she mentioned that her favorite artist is the Dutch painter Piet Mondrian, whose style is totally unlike her own. The reason for this? “He got all the way home to making his work embody his ideas.” 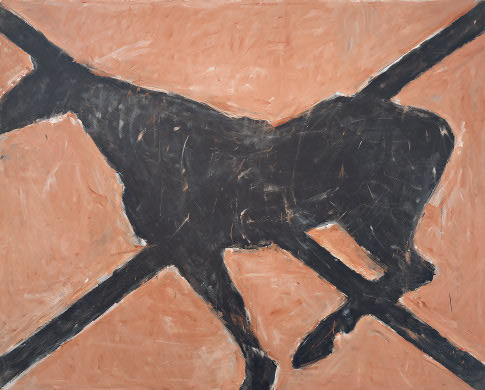 One thought on “Not Lost Her Head”