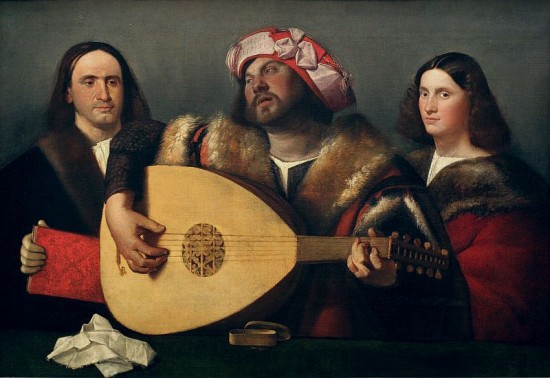 It’s International Dawn Chorus Day, celebrating the daily sunrise display when songbirds sing. The dawn chorus is most noticeable in spring, when birds are defending a breeding territory or attracting a mate. It kicks off around 4 a.m. in northern temperate areas, 6 a.m. in the Tropics and 8 a.m. in the southern hemisphere. Occasionally, if our feathered friends are in particularly fine fettle, the chorus can make early morning sleep a challenge.

Keeping in tune with the singing theme, it seems it’s not just our birdie buddies signing up for a good sing-song these days: crooning has officially got us swooning. Perhaps it all took off with TV shows like X Factor in the UK and American Idol in the US, and got another boost when Fox’s monster hit Glee hit our screens. These singing shows all have astral ratings and award nominations, and their common string is the singing thing. 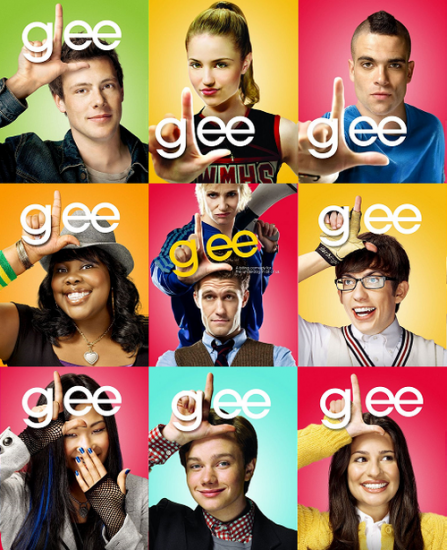 In the UK, people have been dusting down their vocal chords, ready for a good, old-fashioned sing-along. Free, lo-fi and for-all, unison singing is less daunting and ego-maniacal than, say, a night clasping the karaoke machine. London’s Capital Children’s Choir has talented youngsters super keen to sign up. At London’s School of Life (which offers talks and workshops on everyday living), a little lung-lightening kicks off most lectures. As their program manager Caroline Brimmer says, “singing’s a great leveler: it gets everyone smiling… and feeling relaxed and open.” Even club nights are stepping up to the mike: one recent example is the mass sing-song masterminded at an East End event by Jim Whewell, who says “it’s about being together in one collective moment.”

Today’s painting is by Giovanni Cariani (c. 1485 – 1547): A Concert (c. 1518) is widely regarded as his masterpiece. The work strums out the salient stylistic influences that Cariani channeled in his art, since during his career, he shuttled between two different centers. On the one hand was Venice, a sophisticated and refined cultural capital. Here Cariani trained with Giovanni Bellini and in the circle of Giorgione, as well as being exposed to Venetian V.I.Ps like Titian, Sebastiano del Piombo, and Palma Vecchio. This painting’s oblong composition, with figures shown half-length behind a ledge, owes much to Giorgione. Similarly, the subject of a young man (right) with a teacher (left) occurs in Giorgione and his followers. Music-making was also a popular motif in Venetian art, as seen in Titian’s famous Concert in the Pitti Gallery in Florence (shown below). And it’s the symphony of color, from the green cloth caressing the ledge, to the red clothes and book and (above all) the two-tone hat worn by the musician, that’s a tell-tale sign of Venetian influence. 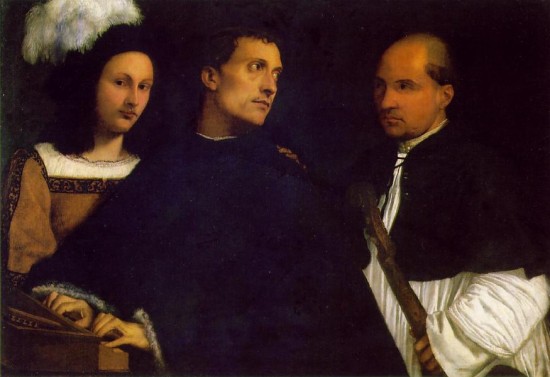 When not in Venice, Cariani carried out his work in Bergamo, a provincial city in the west of Venetian mainland territories, with ties to Lombardy. The sharp realism in A Concert links to the Lombard tradition of close attention to detail. See the six lute strings being strummed, the white, hand-wiping handkerchief and that small box for a spare string. The clothes are all treated with precision and care, while the individualized features of the three men suggest they’re portraits. Best is the musician, barreling into the scene, whose cocked head and faraway gaze are a delicately comic take on the “I’m getting inspired” look.

Studies have shown that there are health benefits to be enjoyed from belting out a song, since singing releases endorphins and lowers levels of cortisol. I don’t know about you, but one look at Cariani’s mid-song musician has me humming along straight away. 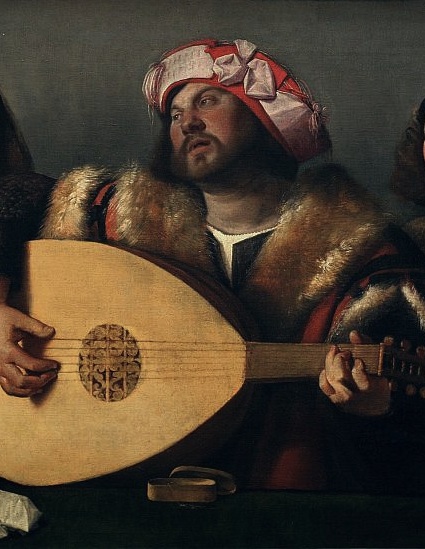